The Six of Calais

The Six of Calais is a one-act play by George Bernard Shaw. It was inspired by Auguste Rodin's sculpture The Burghers of Calais . It is a historical comedy about the conflict between Edward III of England and his wife Philippa of Hainault over his plans to punish the leading citizens of Calais for resisting the 1346 siege.[ citation needed ]

Shaw had had a long friendship with the sculptor Auguste Rodin, who had made a portrait bust of the playwright, and had long admired his sculpture of The Burghers of Calais. [1] Rodin himself had once said of Shaw that his obsession with "cold" reason was "modified to vapour by his temperamental shyness and his Irish sense of humor". [2] The struggle between anger, reason and humour is one of the themes of the play.

King Edward III of England intends to hang six leading citizens of Calais for resisting his siege of the town, but he must keep his plans from his wife Philippa, whose forgiving nature is such that she will plead for their lives. Peter Hardmouth, the leading burgher is unrepentant, and berates Edward for his warmongering. Philippa finds out about Edward's plan and uses all her wiles to persuade him to change his mind, clinching her case by saying that the brutality could adversely affect their unborn child. He eventually gives in, but decides he will use Hardmouth to get back at her. He brings in Hardmouth, who proceeds to berate the queen mercilessly. Furious, she insists that Hardmouth be punished, but now the king says she must be as forgiving as he was. The king warms to Hardmouth when he learns that he comes from Champagne, like the king's grandmother. The two bond and start playing a game which involves pretending to be dogs. The queen is not amused. She is further outraged when Edward says that he hopes some of Harmouth's spirit will enter their unborn child. He kisses her and everyone laughs.

The play was published along with The Simpleton of the Unexpected Isles and The Millionairess in 1936. In the preface Shaw justified the apparently lightweight character of the piece, by arguing that the purpose of a play is to create elegant order from chaotic experience. [3]

The play was produced at the Open Air theatre in 1934.

John Anthony Bertolini describes the play as a self-referential work in which the characters all performing roles. He considers it the most "fully realized" example of Shaw's conception of comic form. [4] 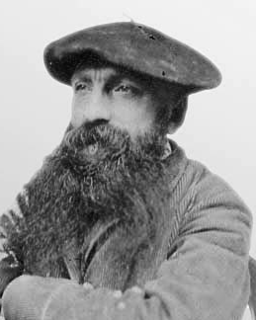 François Auguste René Rodin was a French sculptor generally considered the founder of modern sculpture. He was schooled traditionally and took a craftsman-like approach to his work. Rodin possessed a unique ability to model a complex, turbulent, and deeply pocketed surface in clay. He is known for such sculptures as The Thinker, Monument to Balzac, The Kiss, The Burghers of Calais, and The Gates of Hell. 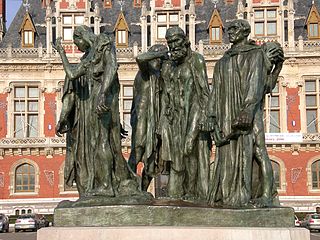 The Burghers of Calais is a sculpture by Auguste Rodin in twelve original castings and numerous copies. It commemorates an event during the Hundred Years' War, when Calais, a French port on the English Channel, surrendered to the English after an eleven-month siege. The city commissioned Rodin to create the sculpture in 1884 and the work was completed in 1889. 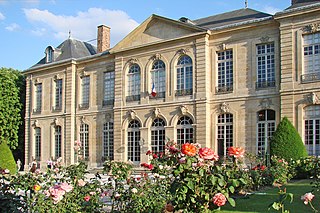 The Musée Rodin in Paris, France, is a museum that was opened in 1919, primarily dedicated to the works of the French sculptor Auguste Rodin. It has two sites: the Hôtel Biron and surrounding grounds in central Paris, as well as just outside Paris at Rodin's old home, the Villa des Brillants at Meudon, Hauts-de-Seine. The collection includes 6,600 sculptures, 8,000 drawings, 8,000 old photographs and 7,000 objets d’art. The museum receives 700,000 visitors annually.

Eustache de Saint Pierre is the best known figure of the group of six known as The Burghers of Calais, the first to volunteer and surrender, wearing "a shirt and a rope around his neck" to the King of England at that time, Edward III, to save the people of Calais.

Jessie Lipscomb, later Jessie Elborne, was an English sculptor of the human figure. She worked in Paris in a shared studio workshop in the late 1800s with French sculptor Camille Claudel and two fellow alumni from the Royal College of Art: Amy Singer and Emily Fawcett.

The Rodin Museum is an art museum located in Philadelphia, Pennsylvania that contains one of the largest collections of sculptor Auguste Rodin's works outside Paris. Opened in 1929, the museum is administered by the Philadelphia Museum of Art. The museum houses a collection of nearly 150 objects containing bronzes, marbles, and plasters by Rodin.

Wissant is a seaside commune in the Pas-de-Calais department in the Hauts-de-France region of France.

The Pale of Calais was a territory in what is now France, whose sovereigns were the monarchs of England following the Battle of Crécy in 1346 and the subsequent siege. The hardships endured during that prolonged conflict are the subject of Auguste Rodin's poignant sculpture of 1889, The Burghers of Calais. After several centuries of peace and prosperity, France again ignited the great tribulations of the burghers of the Pale of Calais by launching the Siege of Calais in 1558 so as to expand French imperial ambitions over the Dutch in Flanders. 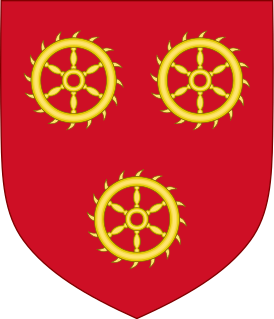 Paon de Roet, also called Paon de Roët, Sir Payn Roelt, Payne Roet and sometimes Gilles Roet, was a herald and knight from Hainaut who was involved in the early stages of the Hundred Years War. He became attached to the court of King Edward III of England through the king's marriage to Philippa of Hainaut.

Pierre de Wiessant is a bronze sculpture by French artist Auguste Rodin, part of his sculptural group The Burghers of Calais. This sculpture represents one of the six burghers who, according to Jean Froissart surrendered themselves in 1347, at the beginning of the Hundred Years' War (1337–1453), in order to save the inhabitants of the French city of Calais from the English laying siege to the city. 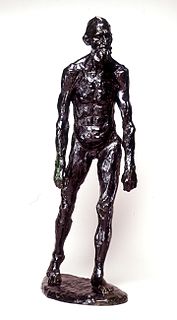 Eustache de Saint Pierre is a sculpture by Auguste Rodin, now in the Museo Soumaya in Mexico City. It was conceived between 1885 and 1886 as part of his The Burghers of Calais group. The other figures in the group were also cast as individual figures. 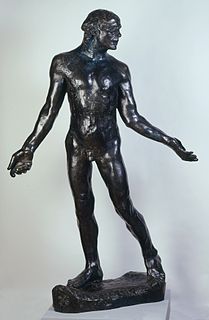 Jean de Fiennes is a sculpture by the French artist Auguste Rodin, first produced between 1885 and 1886. A bronze cast of it is now in the Museo Soumaya in Mexico City. 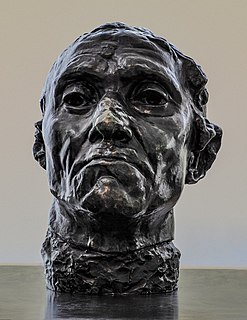 Jean d'Aire is a sculpture by the French artist Auguste Rodin, first conceived around 1885 as part of the planning for his group The Burghers of Calais. 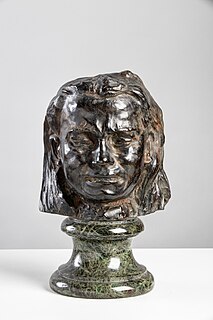 Mask of a Weeping Woman is a sculpture by Auguste Rodin, initially produced as a pair with Weeping Woman for the first version of his The Gates of Hell in 1885. The two pieces were intended to appear on the centre of each panel. They were later moved by Rodin himself, who instead placed Mask on the lower part of the left panel. 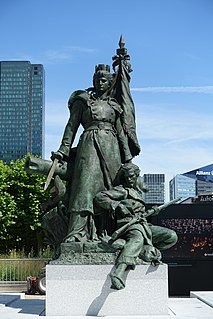 La Défense de Paris is a bronze statue by French sculpture Louis-Ernest Barrias. It commemorates the French dead from the Siege of Paris in 1870–71, during the Franco-Prussian War. The sculpture group was unveiled to the west of Paris on 12 October 1883, erected on an existing plinth that had previously supported a bronze sculpture of Napoleon by Charles Émile Seurre, alongside the crossroads between Courbevoie and Puteaux. The location became the La Défense roundabout, but the statue was later removed. The surrounding area was subsumed into Paris as the city expanded later in the 19th and in the 20th centuries; the area became known as La Défense after the statue. The statue was removed to a new location about 1965, and then moved several times before it was placed at its current location near the Arche de la Défense in 2017.