William Porter Payne (born October 13, 1947) is the former chairman of Augusta National Golf Club, having served in that position from 2006 to 2017 and overseeing the introduction of the first women to the club's membership rolls.

Through the late 1980s and early 1990s, Payne was a leading advocate for bringing the Olympic Games to Atlanta and, in 1996, he was named president and chief executive officer of the Atlanta Committee for the Olympic Games (ACOG).

Born in Athens, Georgia, Payne played football for the hometown University of Georgia; in his sophomore season in 1966, the fourth-ranked Bulldogs lost one game by one point, and he caught a touchdown pass in their Cotton Bowl win. [2] [3]

Payne received his Bachelor of Arts (A.B.) with honors in political science in 1969 from the university as well as his law degree (J.D.) from its School of Law in 1973. While at the university, he was initiated into the Gridiron Secret Society and the Georgia Alpha chapter of Phi Delta Theta fraternity. He received an honorary degree Doctor of Laws from Oglethorpe University in 1991. [4]

Payne first had the idea of Atlanta hosting the Olympic Games in 1987 and began to bring others to support this vision. He first gained support of Atlanta leaders for this effort, including then-mayor Andrew Young, an ally who helped Payne convince International Olympic Committee members to award Atlanta the games. Payne's plan for the games depended heavily on private support, leading him to convince sponsors to back the games. In September 1990, Atlanta was selected by the IOC to host the 1996 Games, surprising many.

After winning the bid, Payne remained as the head of the Atlanta Committee for the Olympic Games, serving as the chief administrator to organize the Olympics. He was the first person to lead the bid effort and then remain to lead the Games.

On May 5, 2006, Billy Payne was announced as the replacement for Hootie Johnson as chairman of Augusta National Golf Club, home of the Masters Tournament, with Payne taking office with the opening of the club's season that October. As chairman, Payne made some adjustments at the Masters, including a new television contract with ESPN that allowed for unprecedented coverage of the par-3 tournament, beginning in 2008. Also that same year, a junior-patrons program was instituted, which allows one Augusta National Golf Club-accredited patron the opportunity to personally bring one junior patron (ages: 8-16), free of charge, to each of the four competitive rounds of the Masters. The program is not available on practice round days, and is also unavailable to company patrons. [5]

On April 7, 2010, immediately before that year's Masters Tournament, Payne criticized Tiger Woods, stating that he failed as a role model. [6] During the HBO Max documentary series "Tiger", Los Angeles Times writer Thomas Bonk said the elite golf tournament always has "a thin undercurrent of racism" and called Payne's comments "a public whipping", a characterization backed up by Bryant Gumbel. [7]

In 2011, Payne and his fellow members at Augusta National continued further with diverting from the club's usually uncompromising, tradition-laden ways by establishing another contemporary modification to their featured golf tournament. They sanctioned a video game that features the Masters name, logo, and their fabled golf course. The video game is so technologically sophisticated that if rain – for example – should happen to be falling in Augusta, Ga. on the day an end-user powers up the game from anywhere around the world, rain will also be simulated on the end-user's video screen. [8]

Payne said in a statement: "'Tiger Woods PGA Tour 12: The Masters' will inspire the next generation of golfers." According to Payne's release, the proceeds from sales of the video game made by Augusta National will benefit a non-profit foundation that promotes youth golf. [8]

At the 2012 Masters Tournament, the public was reminded that some traditions at Augusta National Golf Club (ANGC) still hold true to form as Payne sideswiped reporters' questions about any prospect of allowing a woman (specifically IBM CEO Virginia Rometty) to join ANGC. Payne explained the issue of who gets invited to join ANGC, which is notoriously known as having male-only members, is "subject to the private deliberations of the members." ANGC offered prior membership to the last four IBM CEOs as IBM is one of three major corporate sponsors of the Masters. [9] However, on August 20, 2012, Payne announced that former secretary of state Condoleezza Rice and business executive Darla Moore would be the first female members of the club after 75 years of all male membership. [10]

On August 23, 2017, Augusta National announced that Payne would retire as chairman of the club effective October 16, to be succeeded by Fred Ridley. [11]

Payne received the Olympic Order in Gold at the Closing Ceremonies of the Atlanta Olympic Games in 1996. In 2014, he was inducted as a Georgia Trustee. The honor is given by the Georgia Historical Society, in conjunction with the Governor of Georgia, to individuals whose accomplishments and community service reflect the ideals of the founding body of Trustees, which governed the Georgia colony from 1732 to 1752. He was elected to the World Golf Hall of Fame, class of 2019, in the lifetime achievement category. [12] 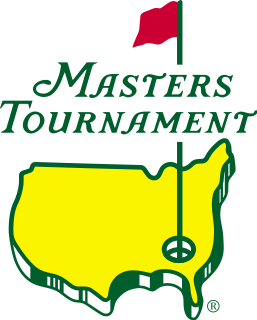 Augusta, officially Augusta–Richmond County, is a consolidated city-county on the central eastern border of the U.S. state of Georgia. The city lies across the Savannah River from South Carolina at the head of its navigable portion. Georgia's third-largest after Atlanta and Columbus, Augusta is located in the Fall Line section of the state. 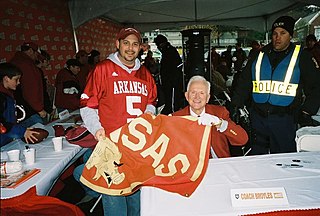 Robert Tyre Jones Jr. was an American amateur golfer who was one of the most influential figures in the history of the sport; he was also a lawyer by profession. Jones founded and helped design the Augusta National Golf Club, and co-founded the Masters Tournament. The innovations that he introduced at the Masters have been copied by virtually every professional golf tournament in the world. 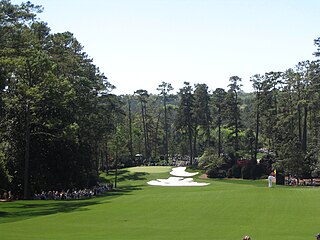 Augusta National Golf Club, sometimes referred to as Augusta or the National, is a golf club in Augusta, Georgia, United States. Unlike most private clubs which operate as non-profits, Augusta National is a for-profit corporation, and it does not disclose its income, holdings, membership list, or ticket sales.

The Auburn Tigers are the athletic teams representing Auburn University, a public four-year coeducational university located in Auburn, Alabama, United States. The Auburn Tigers compete in Division I of the National Collegiate Athletic Association (NCAA) as a member of the Southeastern Conference (SEC).

Clifford Roberts was an American investment dealer and golf administrator.

William Woodward "Hootie" Johnson was the chairman of the executive committee at Bank of America, a member of the South Carolina Business Hall of Fame, and a chairman of Augusta National Golf Club.

The Georgia Tech Yellow Jackets is the name used for all of the intercollegiate athletic teams that represent the Georgia Institute of Technology, located in Atlanta, Georgia. The teams have also been nicknamed the Ramblin' Wreck, Engineers, Blacksmiths, and Golden Tornado. There are eight men's and seven women's teams that compete in the National Collegiate Athletic Association (NCAA) Division I athletics and the Football Bowl Subdivision. Georgia Tech is a member of the Coastal Division in the Atlantic Coast Conference.

PGA Tour on CBS is the branding used for broadcasts of the PGA Tour that are produced by CBS Sports, the sports division of the CBS television network in the United States.

The Trustees for the Establishment of the Colony of Georgia in America, or simply the Georgia Trustees, was organized by James Edward Oglethorpe and associates following Parliamentary investigations into prison conditions in Britain. The organization petitioned for a royal charter in July, 1731, which was signed by George II in April, 1732. After passing through government ministries, the charter reached the Trustees in June, 1732. Oglethorpe personally led the first group of colonists to the new colony, departing England on November, 1732 and arriving at the site of present-day Savannah, Georgia on February 12, 1733 O.S. The founding of Georgia is celebrated on February 1, 1733 N.S., the date corresponding to the modern Gregorian calendar adopted after the establishment of the colony.

Virginia Marie "Ginni" Rometty is an American business executive who served as executive chairman of IBM after stepping down as CEO on April 1, 2020. She previously served as chairman, president and CEO of IBM, becoming the first woman to head the company. She retired from IBM on December 31, 2020 after a near-40 year career at IBM. Prior to becoming president and CEO in January 2012, she first joined IBM as a systems engineer in 1981 and subsequently headed global sales, marketing, and strategy. While general manager of IBM's global services division, in 2002 she helped negotiate IBM's purchase of PricewaterhouseCoopers' IT consulting business, becoming known for her work integrating the two companies. As CEO, she focused IBM on analytics, cloud computing, and cognitive computing systems.

Fred Scobie “Scoobie” Ridley is an American amateur golfer and golf administrator who won the U.S. Amateur in 1975 and became chairman of Augusta National Golf Club in 2017.

The 2014 Masters Tournament was the 78th edition of the Masters Tournament, the first of golf's four major championships in 2014. It was held April 10–13 at Augusta National Golf Club in Augusta, Georgia. Bubba Watson won his second Masters, three shots ahead of runners-up Jonas Blixt and Jordan Spieth; defending champion Adam Scott tied for fourteenth place.

The Eisenhower Tree was a loblolly pine located on the Augusta National Golf Club in Augusta, Georgia. In the 1950s it was named after U.S. President Dwight D. Eisenhower who unsuccessfully lobbied to have it taken down after it interfered with his golf game. Due to its size, history, and location on a prominent golf course, it is considered iconic of the Augusta golf course and is one of the most famous trees in American golf. It was called "among the most famous landmarks in golf" by Cindy Boren in The Washington Post and "arguably the most famous tree in golf" by Martin Dempster of The Scotsman. In February 2014, the tree was removed after suffering extensive damage from a major ice storm.

Champions Retreat Golf Club, is a 27 hole, private golf club, located in Evans, Georgia, United States 14 miles from Augusta National Golf Club. It is the only course in the world with three nines designed by Jack Nicklaus, Arnold Palmer, and Gary Player, the Big Three of Masters fame who combine for 13 Masters titles, 34 Major victories and 159 tournament wins.