Bilma is a department of the Agadez Region in Niger. Its capital lies at the city of Bilma. As of 2012, the department had a total population of 17,935 people. [1] 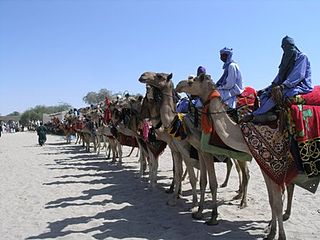 N'guigmi is a city and Commune of fifteen thousand in the easternmost part of Niger, very near to Lake Chad – lying on its shore until the lake retreated. It is a crossroads for the traditional camel caravans of the Toureg and for traders plying North and South across the Sahara. 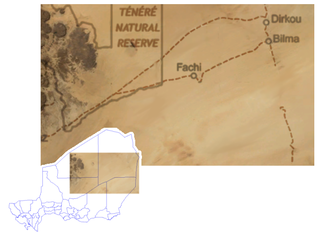 Bilma is an oasis town and commune in north east Niger with, as of the 2012 census, a total population of 4,016 people. It lies protected from the desert dunes under the Kaouar Cliffs and is the largest town along the Kaouar escarpment. It is known for its gardens, for salt and natron production through evaporation ponds, date cultivation, and as the destination of one of the last Saharan caravan routes.

Fachi is an oasis surrounded by the Ténéré desert and the dunes of the Erg of Bilma in eastern Niger, placed on the western edge of the small Agram mountain outcropping. It has an estimated population of some 2000 people. A stopping point of the Agadez to Kaouar caravans of the Azalay, Fachi is 240 kilometres west of Bilma and 320 km (200 mi) east of the Aïr Mountains. Apart from water, dates, and salt, Fachi produces no provisions, and depends entirely upon trade in these products with passing caravans. 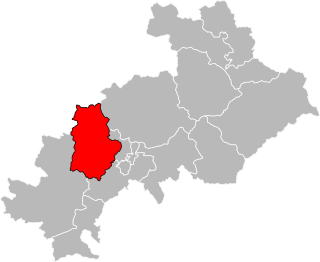 The canton of Veynes is an administrative division in southeastern France. Since the French canton reorganisation which came into effect in March 2015, the canton consists of the following 8 communes: 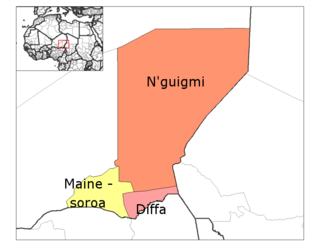 Diffa is a department of the Diffa Region in Niger. It is bordered by Chad to the east. Its capital lies at the city of Diffa. As of 2011, the department had a total population of 209,249 people.

Suliszewice is a village in the administrative district of Gmina Błaszki, within Sieradz County, Łódź Voivodeship, in central Poland. It lies approximately 5 kilometres (3 mi) north-west of Błaszki, 26 km (16 mi) west of Sieradz, and 74 km (46 mi) west of the regional capital Łódź.

Kuśnie is a village in the administrative district of Gmina Sieradz, within Sieradz County, Łódź Voivodeship, in central Poland. It lies approximately 9 kilometres (6 mi) south-west of Sieradz and 61 km (38 mi) south-west of the regional capital Łódź.

Kobylarka is a village in the administrative district of Gmina Szczytniki, within Kalisz County, Greater Poland Voivodeship, in west-central Poland.

Dirkou is a town in the Bilma Department, Agadez Region of north-eastern Niger. It lies in the northern Kaouar escarpment, a north-south line of cliffs which form an isolated oasis in the Sahara desert. As of 2011, the commune had a total population of 14,998 people.

Jasieniec is a settlement in the administrative district of Gmina Osiek, within Starogard County, Pomeranian Voivodeship, in northern Poland. It lies approximately 5 kilometres (3 mi) south of Osiek, 32 km (20 mi) south of Starogard Gdański, and 76 km (47 mi) south of the regional capital Gdańsk.

Staszkowo is a village in the administrative district of Gmina Ostróda, within Ostróda County, Warmian-Masurian Voivodeship, in northern Poland. It lies approximately 10 kilometres (6 mi) east of Ostróda and 29 km (18 mi) south-west of the regional capital Olsztyn.

Wierzchląd is a village in the administrative district of Gmina Stargard, within Stargard County, West Pomeranian Voivodeship, in north-western Poland. 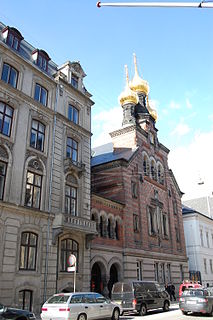 The Alexander Nevsky Church is the only Russian Orthodox church in Copenhagen. It was built by the Russian Government between 1881 and 1883, prompted by Princess Dagmar of Denmark's marriage to Alexander Alexandrovich on 9 November 1866 and their later ascent to the Russian throne as Tsar Alexander III of Russia and Tsaritsa Maria Feodorovna. The church is dedicated to the Russian patron saint Alexander Nevsky.

Ravna Reka is a village in the municipality of Vladičin Han, Serbia. According to the 2002 census, the village has a population of 167 people. 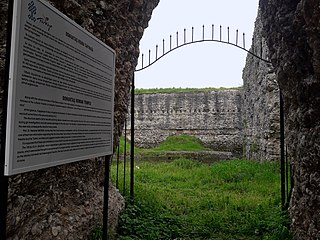 Ala-Suhka is a village in Rõuge Parish, Võru County in southeastern Estonia. The population has been 2 since 2011.