Burford Bridge Hotel is a historic hotel at the edge of the village of Mickleham, Surrey, England. It is to the south of Leatherhead and north of Dorking at the foot of Box Hill on the River Mole.

The hotel has been owned by Moorfield Group (a UK private equity firm) since 2007 and is operated by Accor Hotels under their mid-market Mercure brand. [1]

The Hotel was founded in 1254 as the 'Fox and Hounds', and parts of the present buildings date back to the 16th century. The land on which the hotel stands was a detached part of the medieval Manor of Thorncroft (in Leatherhead) [2] and was held in the mid-thirteenth century by Walter de Merton, the founder of Merton College, Oxford University. [3]

The main building, adjoining Old London Road, dates from the early nineteenth century. [4] In 1882 the hotel became the 'Hare & Hounds', and was commonly known as the Burford Bridge. In 1905, Surrey Public Trust purchased it from Sir Trevor Lawrence, and it changed permanently to the Burford Bridge Hotel, [5] later merging with Trusthouses in 1948.

A 16th century mediaeval tithe barn from the nearby village of Abinger Hammer was re-erected adjoining the hotel in 1934 and now forms the core of the banqueting suite. [4] The barn is alleged to include beams from ships of the Spanish Armada. [4] [1] An outdoor swimming pool was added in the same decade and the changing rooms have been restored to their original 1930s appearance. [1] The Garden Bedrooms were built in 1973 and adjoin the main hotel.

The hotel was flooded on 24 December 2013 when the River Mole burst its banks after heavy rainfall. Nine members of staff and 27 guests were evacuated by boat. [1] The hotel was reopened on 1 September 2014 following renovation. [6]

After leaving London, John Keats took a room overlooking the gardens, and completed his epic poem Endymion there in 1819. [4] (Keats is said to have been recommended the hotel by the essayist and literary critic William Hazlitt. [7] ) Robert Louis Stevenson was a guest in March 1878, [8] during which time he wrote two short stories: Story of the Young Man with the Cream Tarts and Story of the Physician and the Saratoga Trunk . [9] Other prominent visitors included Queen Victoria, Jane Austen, William Wordsworth and Sheridan. It was here too that Lord Nelson spent secret hours with his love Emma Hamilton, before going to vanquish Napoleon's fleet at the Battle of Trafalgar. [4]

The American businessman, Alfred Gwynne Vanderbilt, visited the hotel frequently in the 1890s, stopping to take lunch and to collect telegrams. [10] [11] He and a number of other millionaires, including James Hazen Hyde, practised the old English coaching techniques of the early 19th century for sport. Vanderbilt would frequently drive the coach, perfectly apparelled as a coachman or groom. His party would take a one-day, two-day, or longer trip along chosen routes through several counties, going to prearranged inns and hotels along the routes, [12] of which the Burford Bridge was one. [10]

Dorking is a market town in Surrey in South East England, about 34 km (21 mi) south of London. The main axis of the town centre runs east-west, roughly parallel to the Pipp Brook and along the northern face of an outcrop of Lower Greensand. The town is surrounded on three sides by the Surrey Hills Area of Outstanding Natural Beauty and is close to Box Hill and Leith Hill.

Leatherhead is a town in Surrey, England, on the right bank of the River Mole, and at the edge of the contiguous built-up area of London. Its local district is Mole Valley. Records exist of the place from Anglo Saxon England. It has a combined theatre and cinema, which is at the centre of the re-modelling following late 20th century pedestrianisation. The town is situated 21 mi (34 km) south of central London and 13 mi (21 km) northeast of the Surrey county town of Guildford.

The River Mole is a tributary of the River Thames in southern England. It rises in West Sussex near Horsham and flows northwest through Surrey for 80 km to the Thames at East Molesey, opposite Hampton Court Palace. The river gives its name to the Surrey district of Mole Valley. The Mole crosses the North Downs between Dorking and Leatherhead, where it cuts a steep-sided valley, known as the Mole Gap, through the chalk. Much of the catchment area lies on impermeable rock, meaning that the river level responds rapidly to heavy rainfall. 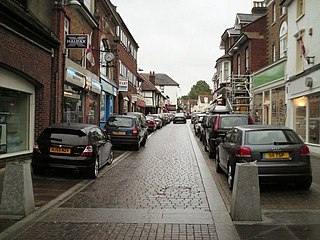 Box Hill is a summit of the North Downs in Surrey, approximately 31 km (19 mi) south-west of London. The hill gets its name from the ancient box woodland found on the steepest west-facing chalk slopes overlooking the River Mole. The western part of the hill is owned and managed by the National Trust, whilst the village of Box Hill lies on higher ground to the east. The highest point is Betchworth Clump at 224 m (735 ft) above OD, although the Salomons Memorial overlooking the town of Dorking is the most popular viewpoint.

Mickleham is a village in south east England, between the towns of Dorking and Leatherhead in Surrey. The civil parish covers 7.31 square kilometres and includes the hamlet of Fredley. The larger ecclesiastical parish includes the majority of the neighbouring village of Westhumble, from which Mickleham is separated by the River Mole.

Stane Street is the modern name of the 91 km-long (57 mi) Roman road in southern England that linked Londinium (London) to Noviomagus Reginorum (Chichester). The exact date of construction is uncertain; however, on the basis of archaeological artefacts discovered along the route, it was in use by 70 AD and may have been built in the first decade of the Roman occupation of Britain.

The Sutton and Mole Valley lines were constructed between 1847 and 1868 by the London, Brighton and South Coast Railway, the London and South Western Railway and the LBSCR-sponsored Horsham, Dorking and Leatherhead Railway.

Mole Valley is a constituency represented in the House of Commons of the UK Parliament since 1997 by Sir Paul Beresford, a Conservative.

Westhumble is a village in south east England, approximately 2 km (1.2 mi) north of Dorking, Surrey. The village is not part of a civil parish, however the majority of the settlement is in the ecclesiastical Parish of Mickleham. 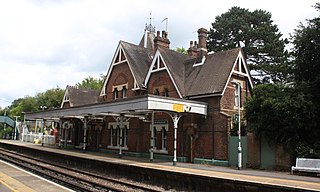 Box Hill & Westhumble is a railway station in the village of Westhumble in Surrey, England, approximately 2 miles (3.2 km) north of Dorking town centre. Box Hill is located approximately 1⁄2 mile (800 m) to the east. It is 21 miles 14 chains (34.1 km) down the line from London Waterloo. Train services are operated by Southern who manage the station, and South Western Railway. 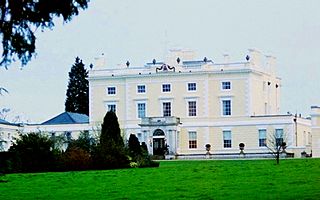 Norbury Park is a swathe of mixed wooded and agricultural land associated with its Georgian manor house near Leatherhead and Dorking, Surrey, which appears in the Domesday Book of 1086. It occupies mostly prominent land reaching into a bend in the Mole in the parish of Mickleham.

Copthorne was a hundred of Surrey, England, an area above the level of the parishes and manors, where the local wise, wealthy and powerful met periodically in Anglo-Saxon England for strategic purposes. After the Norman Conquest the lords of the manor took to annual hundred meetings and their status became eroded by royal-approved transactions of land, as meanwhile the manorial courts and moreover royal courts seized jurisdiction over the Hundred Courts.

Pixham is a chapelry within the parish of Dorking, Surrey on the near side of the confluence of the River Mole and the Pipp Brook to its town, Dorking, which is centred 1 km (0.6 mi) southwest. The town as a whole, uniquely in Surrey, has three railway stations; Pixham adjoins or is the location of two of the three; and is near the junction of the A24 and A25 main roads.

The Portsmouth line is a secondary main line originally built by the London, Brighton and South Coast Railway and the London and South Western Railway between 1847 and 1868. It leaves the South London Line at Peckham Rye, with connections to the Victoria branch of the Brighton Main Line at Streatham, and continues via Sutton, Epsom and Dorking to join the Mid-Sussex Line at Horsham.

The Horsham, Dorking and Leatherhead Railway (HDLR) was an early railway company in southern England. It completed earlier plans for a line through the Mole Valley, joining several important towns across the North Downs. It was promoted and later acquired by the London, Brighton and South Coast Railway (LBSCR), and became an essential part of the route later known as the Portsmouth Line.