The other town in the district is Leatherhead. The largest villages are Ashtead, Fetcham and Great Bookham, in the northern third of the district. Most of the district is on the escarpments of or adjoins the Surrey Hills AONB (the North Downs and Greensand Ridge including locally Leith Hill, Polesden Lacey, Box Hill and Denbies Wine Estate, the largest vineyard in the country and several golf courses) [1] The North Downs are followed or parallelled by the Pilgrims' Way. There are stations on the London–Worthing and Reading–Gatwick Airport railways, and in the northern third, a commuter stopping-service pattern line, London–Guildford (via Epsom) line.

The A24 road and the M25 motorway are the main thoroughfares and relative to London the incidence of car ownership is high. The area hosts hill-focussed sub-laps of the London–Surrey Classic cycling tour each year.

Mole Valley District Council is elected by thirds: one-third of councillors are elected at each election, each serving four year terms; three years out of four having elections.

The council was however elected across all areas in 2000 after major boundary changes to the wards.

Although Mole Valley (UK Parliament constituency) has been Conservative for a long time, Mole Valley District Council has, with Independent/RA and Liberal Democrats, for long periods been under no overall control. [4]

Between May 2015 and May 2018, Mole Valley Liberal Democrats gained two council seats in by-elections (Holmwoods June 2015 gain from UKIP, Leatherhead North June 2016 gain from Conservatives), and one Conservative councillor defected to Beare Green Independent (May 2017). The Liberal Democrats then made a net gain of one in May 2018, pushing the Council back into no overall control. However, Conservatives continued to control the administration with the support of the Independents, with three Ashtead Independents becoming members of the Cabinet.

The overall composition established in May 2018 is 20 Conservatives, 14 Liberal Democrats, and 7 Independents (6 Ashtead Independents and 1 Beare Green Independent). There are no Labour, UKIP or Green Party councillors.

The district, named after the River Mole, was formed on 1 April 1974, under the Local Government Act 1972, by a merger of the urban districts of Dorking and Leatherhead and most of the Dorking and Horley Rural District.

A Legatum Prosperity Index published by the Legatum Institute in October 2016 showed Mole Valley as the second most prosperous council area in the United Kingdom, after the nearby Borough of Waverley. [8]

Churches graded II* or above

In May 2006, a report commissioned by British Gas [25] showed that housing in Mole Valley produced the twentieth highest average carbon emissions in the country at 6,928 kg of carbon dioxide per dwelling.

In 2008 a group of residents got together and formed The Green Mole Forum with the aim of promoting sustainable development in Mole Valley both by providing a hub to help residents, and to lobby the council to undertake more sustainable policies.

Mole Valley is served by these emergency services:

Freedom of the District

The following people and military units have received the Freedom of the District of Mole Valley. 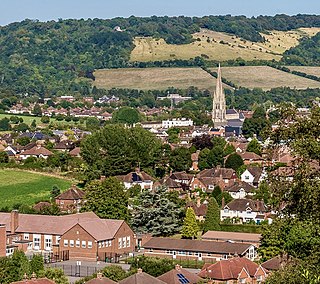 Dorking is a market town in Surrey in South East England, about 34 km (21 mi) south of London. It is in Mole Valley District and the council headquarters are to the east of the centre. The High Street runs roughly east-west, parallel to the Pipp Brook and along the northern face of an outcrop of Lower Greensand. The town is surrounded on three sides by the Surrey Hills Area of Outstanding Natural Beauty and is close to Box Hill and Leith Hill. 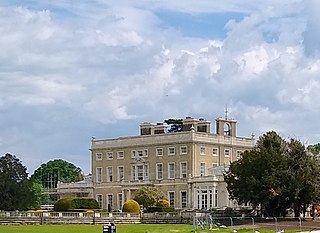 Ashtead is a large village in the Mole Valley district of Surrey, England, approximately 15.5 mi (25 km) south of central London. Primarily a commuter settlement, Ashtead is on the single-carriageway A24 between Epsom and Leatherhead. The village is on the northern slopes of the North Downs and is in the catchment area of The Rye, a tributary of the River Mole.

Leatherhead is a town in Surrey, England, on the right bank of the River Mole, and at the edge of the contiguous built-up area of London. Its local district is Mole Valley. Records exist of the place from Anglo Saxon England. It has a combined theatre and cinema, which is at the centre of the re-modelling following late 20th century pedestrianisation. The town is situated 21 mi (34 km) south of central London and 13 mi (21 km) northeast of the Surrey county town of Guildford. 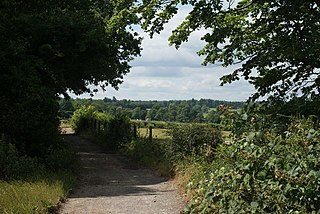 Fetcham is a suburban village in Surrey, England west of the town of Leatherhead, on the other side of the River Mole and has a mill pond, springs and an associated nature reserve. The housing, as with adjacent Great Bookham, sits on the lower slopes of the North Downs north of Polesden Lacey (NT). Fetcham Grove has Leatherhead and the village's main leisure centre and football club, between the two settlements. Fetcham has two short parades of shops and services, several sports teams and parks and a small number of large pubs and food premises.

The River Mole is a tributary of the River Thames in southern England. It rises in West Sussex near Horsham and flows northwest through Surrey for 80 km to the Thames at East Molesey, opposite Hampton Court Palace. The river gives its name to the Surrey district of Mole Valley. The Mole crosses the North Downs between Dorking and Leatherhead, where it cuts a steep-sided valley, known as the Mole Gap, through the chalk. Much of the catchment area lies on impermeable rock, meaning that the river level responds rapidly to heavy rainfall. 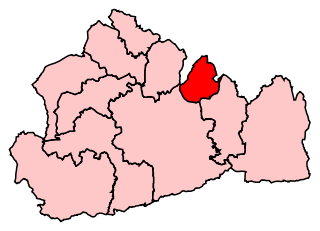 Epsom and Ewell is a constituency represented in the House of Commons of the UK Parliament since 2001 by Chris Grayling, a Conservative.

Mole Valley is a constituency represented in the House of Commons of the UK Parliament since 1997 by Sir Paul Beresford, a Conservative. 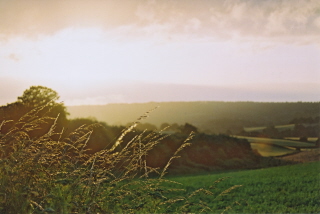 Abinger is a large, well-wooded and mostly rural civil parish that lies between the settlements of Dorking, Shere and Ewhurst in the district of Mole Valley, Surrey, England.

Betchworth is a village and civil parish in the Mole Valley district of Surrey, England. The village centre is on the north bank of the River Mole and south of the A25 road, almost 3 miles (4.8 km) east of Dorking and 3 miles (4.8 km) west of Reigate. London is 19.5 miles (31.4 km) north of the village.

Buckland is a village and civil parish in the Mole Valley district of Surrey, England, between Dorking and Reigate, its nearest towns. The civil parish is bordered by the North Downs escarpment in the north. The area contains a number of sand pits.

Cherkley Court, at the extreme southeast of Leatherhead, Surrey, in England, is a late Victorian neo-classical mansion and estate of 370 acres (1.5 km2), once the home of Canadian-born press baron Lord Beaverbrook. The main house is listed Grade II on the National Heritage List for England.

Leatherhead railway station is in Leatherhead, Surrey, England. It is managed by Southern, with services provided by them and South Western Railway. It is 18 miles 2 chains (29 km) from London Waterloo. 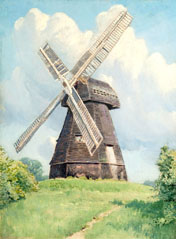 Elections to Mole Valley Council were held on 1 May 2008. One third of the council was up for election and the Conservative party stayed in overall control of the council. Overall turnout was 46.5% a drop from the 47.2% seen in the 2007 election.

Pixham is a chapelry within the parish of Dorking, Surrey on the near side of the confluence of the River Mole and the Pipp Brook to its town, Dorking, which is centred 1 km (0.6 mi) southwest. The town as a whole, uniquely in Surrey, has three railway stations; Pixham adjoins or is the location of two of the three; and is near the junction of the A24 and A25 main roads.

Ashtead Park is a 24.2-hectare (60-acre) Local Nature Reserve in Ashtead in Surrey. It is owned by Mole Valley District Council and managed by the Surrey Wildlife Trust. It contains several important listed buildings. The Park itself has remains of a Roman building, four lakes/ponds and the school's playing fields and is Grade II listed on the Register of Historic Parks and Gardens.