Ca' Vendramin Calergi was designed in the late 15th century by Mauro Codussi, architect of Chiesa di San Zaccaria and other noteworthy churches and private residences in Venice. Construction began in 1481 and was finished after his death by the Lombardo family of architects, who completed it in 1509. The twenty-eight-year period it took to complete construction is considered short based on the technology available at that time.

The spacious Renaissance-style palace stands three stories high with direct access to the Grand Canal available by gondolas. The beauty and balance of the building's façade are exceptional. Classically inspired columns divide each level facing the canal. Two pairs of tall French doors divided by a single column topped by arches and a trefoil window rest above the doors on the piano nobile and upper levels. Opulent paintings, sculptures, and architectural details originally filled the building's interior. Baroque master Mattia Bortoloni decorated the ceilings of many rooms. The palace is locally known by the nickname "Non Nobis Domine" ("Not unto us, O Lord"), [1] which is engraved in the stone under a ground-floor window, and which is considered the motto of the Loredan family.

Andrea Loredan, a connoisseur of the fine arts, commissioned the palace, which was paid for by the doge, Leonardo Loredan. In 1581, the Loredan heirs of Andrea sold it for 50,000 ducats to Eric II, Duke of Brunswick-Lüneburg who took loans to afford it and to host sumptuous dinners for the Venetian nobility. However, the duke kept it for only two years before selling it to Guglielmo I Gonzaga, Marquis of Mantua, who then sold it to Vittore Calergi, a Venetian noble from Heraklion on the island of Crete. Calergi greatly expanded the building in 1614 with a large addition by architect Vincenzo Scamozzi called the "White Wing" which included windows overlooking a garden courtyard. The addition was demolished in 1659 and rebuilt the following year. In 1739, the palace was inherited through marriage by the Vendramins, a powerful patrician family of merchants, bankers, religious leaders, and politicians, who owned it for more than a century.

In 1844, Marie-Caroline de Bourbon-Sicile, Duchess of Berry, and her second husband, Ettore Carlo Lucchesi-Palli, Duke della Grazia, purchased Ca' Vendramin Calergi from the last member of the Vendramin family line. In the turmoil of the Risorgimento, they were forced to sell the palace to Caroline's grandson, Henry (Enrico), Count de' Bardi, and many of its fine works of art were auctioned in Paris. Count de' Bardi and his wife Infanta Adelgundes and the related Dukes of Grazia maintained the home and hosted many famous names of the day. In 1937, the last of the Grazia nobles, Count Lucchesi-Palli, sold it to Giuseppe Volpi, Count of Misurata, who remodeled the living quarters and turned it into a Center for Electromagnetic and Electrical Phenomena.

The City Council of Venice purchased Ca' Vendramin Calergi in 1946. Since 1959, it has been the winter home to the celebrated Venice Casino (Casinò di Venezia). [2] [3]

The composer Richard Wagner stayed in Venice six times between 1858 and his death. He arrived in Italy on his final trip not long after performances of his opera Parsifal premiered at the second Bayreuth Festival. He rented the entire piano nobile (mezzanine) level of the Ca' Vendramin Calergi from Count de' Bardi before his departure and arrived on 16 September 1882 with his wife Cosima Liszt, four children (Daniela von Bülow, Isolde, Eva and Siegfried Wagner) and household servants.

Wagner died of a heart attack in the palace on the afternoon of 13 February 1883 at age 69. A memorial plaque on a brick wall adjacent to the building is inscribed with a tribute by novelist and poet Gabriele d'Annunzio that reads:

The Wagner Museum (Museo Wagner) opened at the palace in February 1995. It holds the Josef Lienhart Collection of rare documents, musical scores, signed letters, paintings, records and other heirlooms. The holdings constitute the largest private collection dedicated to Wagner outside of Bayreuth. [5] The museum is open to the public on Saturday mornings by appointment.

The International Association of Wagner Societies also holds a symposium called "Wagner Days in Venice" (Giornate Wagneriane a Venezia) at the palace each autumn. [6] 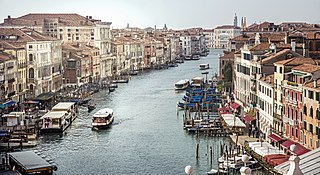 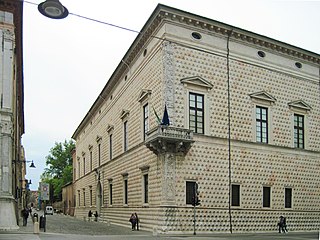 The piano nobile is the principal floor of a palazzo. This floor contains the main reception and bedrooms of the house.

The Ca' d'Oro or Palazzo Santa Sofia is a palace on the Grand Canal in Venice, northern Italy. One of the older palaces in the city, its name means "golden house" due to the gilt and polychrome external decorations which once adorned its walls. Since 1927, it has been used as a museum, as the Galleria Giorgio Franchetti.

Lombardo, the name of a family of Venetian sculptors and architects; their surname was apparently Solaro, and the name of Lombardo was given to the earliest known, Martino, who emigrated from Lombardy to Venice in the middle of the 15th century AD and became celebrated as an architect.

The International Association of Wagner Societies is an affiliation of Wagner societies that promotes interest and research into the works of Richard Wagner, raises funds for scholarships for young music students, singers, and instrumentalists, and supports the annual Bayreuth Festival. It also sponsors symposia, holds singing competitions for Wagnerian voices, and issues awards for stage direction and stagings of Wagner's operas. The association is a nonprofit organization.

The House of Vendramin was a rich merchant family of Venice, Italy, who were among the case nuove or "new houses" who joined the patrician class when the Libro d'Oro was opened after the battle of Chioggia. Andrea Vendramin served as the sole Vendramin Doge from 1476–78, at the height of Venetian power, though in 1477 an Antonio Feleto was imprisoned, then banished, for remarking in public that the Council of the Forty-One must have been hard-pressed to elect a cheesemonger Doge. In his youth, Andrea and his brother Luca, in joint ventures, used to ship from Alexandria enough goods to fill a galley or a galley and a half, Malipiero recorded in retrospect: even his factors grew rich managing his affairs. At this period, mentions of Vendramins in various fields of business occur; Luca Vendramin (d.1527) founded a successful bank on the still-wooden Rialto Bridge with three Capelli brothers in 1507, but in his will of 1524 forbade his sons from continuing in banking. An early text on accounting mentions that the Vendramins' soap is so reliably good that you can buy it without inspecting it. Later they owned an important theatre. 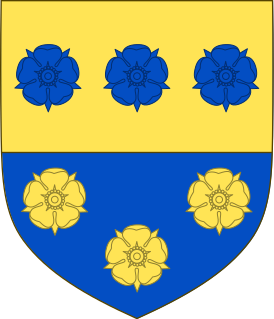 The House of Loredan is a Venetian noble family of supposed ancient Roman origin, which has played a significant role in shaping the history of the entire Mediterranean. A political dynasty, the family has throughout the centuries produced a number of famous personalities: doges, statesmen, magnates, procurators, providures, podestàs, military commanders, naval captains, church dignitaries, writers and lawyers. 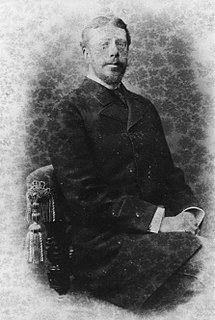 Prince Henry of Bourbon-Parma, Count of Bardi was the youngest son and child of Charles III, Duke of Parma and his wife Princess Louise Marie Thérèse of France, the eldest daughter of Charles Ferdinand, Duke of Berry and Princess Caroline Ferdinande Louise of the Two Sicilies.

Palazzo Loredan dell'Ambasciatore is a late 15th-century Gothic palace in Venice, Italy, that once belonged to the noble Loredan family. Located in the Dorsoduro sestiere (quarter), it was called "dell'Ambasciatore" because it was offered as a home of the ambassadors of the Austrian Empire to the Republic by Doge Francesco Loredan.

Marie-Caroline of Bourbon-Two Sicilies, Duchess of Berry was an Italian princess of the House of Bourbon who married into the French royal family, and was the mother of Henri, Count of Chambord. 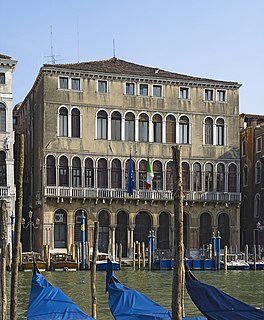 Ca' Farsetti is a palace in Venice, Italy. It is located in the sestiere (district) of San Marco, and faces the Grand Canal, not far from the Ponte di Rialto. The neighboring building is Palazzo Cavalli. 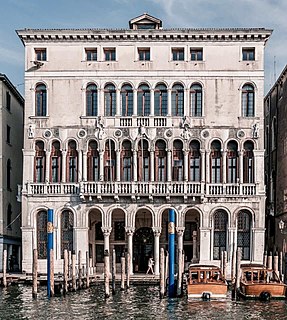 Ca' Loredan is a 13th-century Romanesque-style former palace of the Loredan family located on the Grand Canal in Venice, northern Italy. It is located in the sestiere (district) of San Marco and faces the Grand Canal, not far from the Rialto Bridge. Together with the annexed Ca' Farsetti, it is currently home to the city's municipal council.

The following outline is provided as an overview of and topical guide to Venice:

Andrea Loredan was a Venetian nobleman of the Loredan family, known as a collector of art. He is notable for commissioning the Ca' Loredan Vendramin Calergi, a palace on the Grand Canal, to designs by Mauro Codussi. The palace was paid for by Doge Leonardo Loredan, it is known for its association with Richard Wagner and the palace today hosts the Casino of Venice. Andrea is also notable for paying for the choir of the church of San Michele in Isola, also designed by Codussi.

Loredan is a Venetian surname. The House of Loredan is an aristocratic Venetian family that included various doges of the Republic of Venice, and the surname is almost exclusively associated with the family. The surname most likely originated from the toponym Loreo, which itself originated from its Latin name Lauretum, meaning laurel. Another theory of the origin of the surname, though most likely legendary, is that it comes from the Latin epithet Laureati, given to ancestors of the Loredan family due to their historical glory in ancient Rome and the many victories they achieved in battles. The surname is spelled Loredano in Italian, Lauredano or Lauredanus in Latin, and Lorentano (Λορεντάνο) in Greek, though it is also historically found as Lordis (Λορδᾶς) and Lordano (Λορδάνο). The feminine name Loredana, common in Italy and Romania, was likely inspired by the surname. 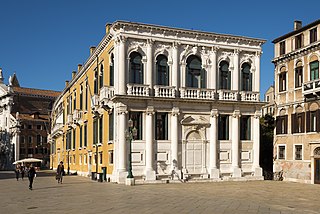 Palazzo Loredan in Campo Santo Stefano is a palace in the San Marco district of Venice, overlooking Campo Santo Stefano. Before the acquisition by the Loredan family in 1536 and the restoration by the architect Antonio Abbondi, it was a group of adjacent buildings, in the Gothic style, belonging to the Mocenigo family. The purchased buildings were substantially restored and made into a single building for the residence of the wealthy noble family of Loredan. 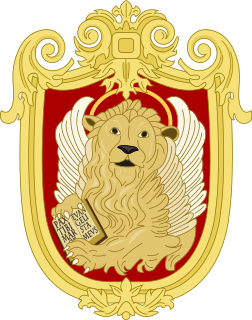 The Venetian patriciate was one of the three social bodies into which the society of the Republic of Venice was divided, together with citizens and foreigners. Patrizio was the noble title of the members of the aristocracy ruling the city of Venice and the Republic. The title was abbreviated, in front of the name, by the initials N.H., together with the feminine variant N.D.. Holding the title of a Venetian patrician was a great honour and many European kings and princes, as well as foreign noble families, are known to have asked for and obtained the prestigious title.