Candice Rickelle Glover (born November 22, 1989) is an American R&B singer and actress who won the twelfth season of American Idol . [1] Glover is the first winner to have auditioned three times before being cast for the live shows. Her debut album Music Speaks was released on February 18, 2014. [2]

Candice Rickelle Glover was born on November 22, 1989 in Beaufort, South Carolina, to John and Carole Glover. She is the oldest of seven children. [3] [4] She graduated from Beaufort High School in 2008. [5] Before Idol, Candice was insecure and struggled with her weight. In an interview, she said she had to have counseling at school because of her insecurity issues.

Glover auditioned in Savannah, Georgia. She sang "Blame It on Me" by Chrisette Michele. She advanced, but her audition was not aired. In round one, she performed Karina's "Slow Motion". In round three, she sang "Someone like You" by Adele, where she received a standing ovation from the judges. She performed "It Doesn't Matter Anymore" by Buddy Holly with eleventh season finalists DeAndre Brackensick and Jessica Sanchez in the group round and was eliminated.

During her audition for the twelfth season, Glover sang "Syrup & Honey" by Duffy, where she received a standing ovation. Judge Randy Jackson said that she was the best performer by far in the competition. Mariah Carey called her singing "The best singing we have heard thus far." Glover advanced to Hollywood. In an interview, she said, "I thought they were going to get sick of seeing my face." For the first round in Hollywood, she sang "Impossible" by Christina Aguilera. For the second round, she performed "Hit Em Up Style" with Kamaria Ousley, Denise Jackson, and Melinda Ademi. This was named the best group the judges had seen all day. In round three, she put a jazzy twist on Alicia Keys's "Girl on Fire". It was later announced that Glover was one of the top 20 girls of the season and she advanced to Las Vegas. In Vegas, she performed "Natural Woman" by Aretha Franklin. In the semi-finals of the competition, Glover performed "Ordinary People" by John Legend. On March 7, 2013, she was voted into the Top 10. [1] Her Top 10 performance of "I (Who Have Nothing)" by Ben E. King earned her enough votes to land among the night’s top three contestants, along with Kree Harrison and Angie Miller. [7] After her Top 6 performances, Glover earned enough votes to land in the night's top two contestants, along with Kree Harrison. She covered "Lovesong" by The Cure and broke down in tears after receiving a standing ovation. For the first time, after her Top 4 performance, she landed in the bottom two. On May 16, Glover won the contest and her debut single 'I Am Beautiful' was released to music store outlets.

Glover has begun work on her second studio album, due out in 2016. [15] She is writing all of the material on the album herself. She announced on her Facebook page that the album will be more "her" and that there will be a duet with fellow Idol contestant Amber Holcomb. [16]

Glover was also featured on Chadd Black's single, "Love No Fear", which was released on February 14, 2015. [15] She will be releasing a mixtape with Black sometime in 2016. [17] In January 2016, she announced that she had parted ways with 19 Recordings/Interscope. Her new album will be released independently, and she hopes to work with Jazmine Sullivan, Chris Brown, and/or Drake on it. [18]

She returned to Idol for the series finale on April 7, 2016. She performed with all the returning alumni to open the show, singing "One Voice." Later, she performed "Joy to the World" with Melinda Doolittle.

Glover sang on Broadway in the show “Home For the Holidays, Live on Broadway” which was presented November 17 to December 30, 2017, at the August Wilson Theatre. Other vocal performers included Josh Kaufman, Bianca Ryan, Peter Hollens and Evynne Hollens. [19]

Glover says she wants to be a counselor to help girls through what she went through as a teenager. Nicki Minaj broke down in tears after Glover's performance of "Next to Me", saying that Glover has gotten so much more confident during her time on the show. Glover said she would never wear a dress on Idol, but she eventually wore one during her performance of "Somewhere," "You've Changed" by Billie Holiday and the finale. After this, girls began tweeting her saying she was their inspiration and that she made them feel more confident. Her musical influences include Christina Aguilera, Jazmine Sullivan and Brandy. [20] In 2011, Sullivan retweeted Glover's YouTube cover of "Chasing Pavements" by Adele and called it "amazing". Glover once again performed this song on the finale of American Idol.

The first season of American Idol premiered on June 11, 2002 and continued until September 4, 2002. It was won by Kelly Clarkson. The first season was co-hosted by Ryan Seacrest and Brian Dunkleman, the latter of whom left the show after the season ended.

The fifth season of reality television singing competition American Idol began on January 17, 2006, and concluded on May 24, 2006. Randy Jackson, Paula Abdul and Simon Cowell returned to judge, and Ryan Seacrest returned to host. It is the most successful season to date ratings-wise, and resulted in 18 contestants getting record deals – nine of them with major labels. It was the first season with a male winner and a female runner-up.

Katharine Hope McPhee-Foster is an American actress, singer, and songwriter. In May 2006, she was the runner-up on the fifth season of American Idol.

The seventh season of American Idol, the annual reality show and singing competition, began on January 15, 2008, and concluded on May 21, 2008. Ryan Seacrest continued to host the show with Simon Cowell, Paula Abdul, and Randy Jackson returning as judges. David Cook was announced the winner of the competition on May 21, 2008, defeating runner-up David Archuleta by a margin of roughly 12 million votes out of over 97 million, which was at that time the highest recorded vote total in the show's history. The split was 56 to 44%.

The eleventh season of American Idol premiered on Fox on January 18, 2012. The show aired on Wednesdays and Thursdays at 8/7c. Ryan Seacrest returned as host, while Randy Jackson, Steven Tyler, and Jennifer Lopez all returned as judges. Interscope Records Chairman Jimmy Iovine, a songwriter and producer, also returned as an in-house mentor to work with the contestants on a weekly basis. This season followed the same format as season 10. Tyler and Lopez announced that they would be leaving the show two months after the finale. Lopez later returned as a judge for the show's thirteenth season.

The twelfth season of American Idol premiered on January 16, 2013, as part of the mid-season of the 2012–13 network television season. Ryan Seacrest returned to host. Randy Jackson returned for his twelfth season as judge and was joined by new judges Mariah Carey, Nicki Minaj and Keith Urban, who replaced Jennifer Lopez and Steven Tyler.

Michael Colton Dixon is an American singer-songwriter and musician from Murfreesboro, Tennessee. He placed seventh on the eleventh season of American Idol.

Angela Kristine "Angie" Miller, known by her stage name Zealyn, is an American singer-songwriter. She came in third place on the twelfth season of American Idol in 2013. Her debut EP, Weathered, was released independently on November 12, 2014. On February 26, 2016, she began releasing new material under the stage name, "Zealyn."

Kree Annette Harrison is an American singer and musician, who was the runner-up on the twelfth season of American Idol.

Amber Nicole Holcomb is an American singer, who came in fourth place on the twelfth season of American Idol.

"I Am Beautiful" is the debut single and coronation song from American recording artist and American Idol season 12 winner, Candice Glover. The song was co-written by Joleen Belle and Jaden Michaels, and co-produced by Roahn Hylton and John Lock.

The thirteenth season of American Idol, styled as American Idol XIII, premiered on the Fox television network on January 15, 2014. Ryan Seacrest returned as host for his thirteenth season. Keith Urban was the only judge from the twelfth season to return. Former judge Jennifer Lopez, who returned after one season absence, and Harry Connick Jr. joined the judging panel following the departures of Mariah Carey, Nicki Minaj and Randy Jackson, though Jackson returned as a mentor, replacing Jimmy Iovine.

Music Speaks is the debut studio album by American recording artist and American Idol twelfth season winner Candice Glover, released on February 18, 2014, by Interscope Records. It was preceded by the release of two digital singles, "I Am Beautiful" and "Cried". In the album, Glover combined the styling of contemporary R&B with 1960s-style lounge music.

Jena Irene Asciutto, also known as Jena Irene, is an American singer from Farmington Hills, Michigan. She was the runner-up of the thirteenth season of American Idol. Asciutto became the first female Wild Card contestant of the series to qualify into the finale and became the second Wild Card contestant, after Clay Aiken in the second season, to make it into the finale. In April 2015, she signed a long-term recording deal with the independent Detroit label Original 1265 Recordings. Asciutto released her debut EP, Innocence, on April 22, 2016, which was followed by her debut album, Cold Fame. 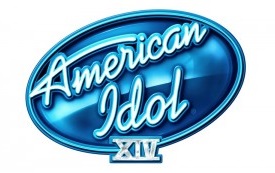 The fourteenth season of American Idol, also known as American Idol XIV, premiered on the Fox television network on January 7, 2015. Ryan Seacrest continues his role as host, while Jennifer Lopez, Keith Urban and Harry Connick Jr. returned for their respective fourth, third and second times as judges. Randy Jackson stepped down as mentor, being replaced by Scott Borchetta. Long-time sponsor Coca-Cola ended its relationship with the show. This was the fourth season to have an all-male finale and the third season where the final two contestants had never been in the bottom group prior to the finale.

The fifteenth season of American Idol, also branded as American Idol: The Farewell Season, premiered on the Fox television network on January 6, 2016. Ryan Seacrest continued as the show's host, while Jennifer Lopez, Keith Urban, and Harry Connick Jr. returned as judges. Scott Borchetta also returned as the in-house mentor. This season was four to six weeks shorter than seasons 2 through 14. On April 7, Trent Harmon was announced as the season's winner and La'Porsha Renae was the runner-up. Harmon was the third consecutive winner to never be in the bottom two or three, and the eighth male winner in nine years.

The sixteenth season of American Idol premiered on March 11, 2018, on the ABC television network. It is the show's first season to air on ABC, and after 15 years on Fox, Ryan Seacrest continued his role as the show's host, while Katy Perry, Luke Bryan, and Lionel Richie joined as judges. Maddie Poppe from Clarksville, Iowa won the season on May 21, 2018, while her boyfriend Caleb Lee Hutchinson was the runner-up, and Gabby Barrett finished in third place. Poppe was the first female winner since Candice Glover in season twelve.