CoGo Bike Share is a public bicycle sharing system serving Columbus, Ohio and its suburbs. The service is operated by the bikeshare company Motivate (part of Lyft, Inc.) It was created in July 2013 with 300 bikes and 30 docking stations, since expanded to about 600 bikes and 80 stations. The service is operated in conjunction with the City of Columbus, which owns all equipment.

CoGo Bike Share was launched on July 30, 2013 in Columbus. It opened with 300 bikes and 30 docking stations in downtown and surrounding areas, operated by Alta Bicycle Share (since rebranded as Motivate). The bikes and stations were designed and constructed by PBSC Urban Solutions. The network's original boundaries were Second Avenue north of downtown, Parsons Avenue east of downtown, south to German Village, and west to Route 315. The City of Columbus provided a subsidy for CoGo's first year with an initial $2.3 million investment in equipment, though afterward the program became self-sustaining. [2] In 2015, the city purchased 110 bikes and 11 stations to expand to the Near East Side, Weinland Park, and the southern end of the Ohio State University campus. [3]

In 2015, Ohio State University launched a 115-bicycle, 15-station system on its campus. The university decided not to integrate with the city's CoGo system, instead utilizing Zagster to operate its system. The city had desired a unified system, though the university preferred Zagster's cost and variety of bike models. [4] The program would include commuter, tandem, handle cycle, electric assist, heavy duty, and three-wheeled cargo bicycles as part of its system. [5]

In 2016, the system became the second in the United States to utilize Transit app payments. After a pilot in Aspen, Colorado, Transit began offering its payment system to CoGo, allowing riders to unlock bikes using their smartphones. [6] In late 2019, after CoGo's operator was purchased by Lyft, the latter company announced it was revoking use of the Transit app, forcing users to utilize its Lyft app to unlock bikes on smartphones. [7]

The service is operated by the bikeshare company Motivate, part of Lyft, Inc. since 2018.

CoGo maintains approximately 600 bicycles across the city. [1] The City of Columbus owns all equipment, contracting the operations to Lyft. [2] [3] E-bikes were added to the system in June 2020. [8]

The bikes are available for short term rental, using a credit card or member key fob. [2] Additionally, the Lyft app allows users to unlock bikes with their smartphones. [7]

The payment system is broken down into several options: [8] 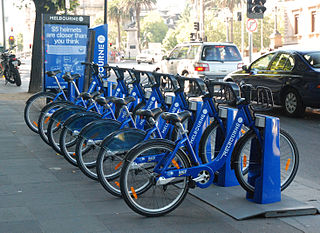 A bicycle-sharing system, public bicycle scheme, or public bike share (PBS) scheme, is a shared transport service in which bicycles are made available for shared use to individuals on a short term basis for a price or free. Many bike share systems allow people to borrow a bike from a "dock" and return it at another dock belonging to the same system. Docks are special bike racks that lock the bike, and only release it by computer control. The user enters payment information, and the computer unlocks a bike. The user returns the bike by placing it in the dock, which locks it in place. Other systems are dockless. 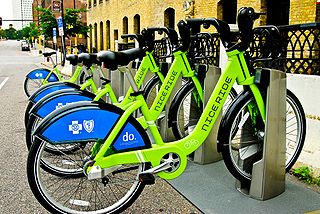 Nice Ride Minnesota is a seasonally operated nonprofit bicycle sharing system in Minneapolis and St. Paul, Minnesota based on the BIXI brand created by Public Bike System Company and first used in Montreal. Launched on June 10, 2010, it served over 10,000 trips in its first month and reached 100,817 rides in the first season of operation. The bicycles in the system are manufactured by Cycles Devinci. They are painted fluorescent green and include a cargo carrier and headlights. They receive daily maintenance, and are redistributed throughout the system via truck. 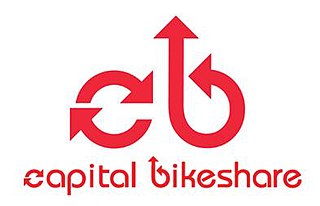 Capital Bikeshare is a bicycle-sharing system which serves Washington, D.C.; Arlington County, Virginia; the cities of Alexandria, Virginia and Falls Church, Virginia; Montgomery County, Maryland and Fairfax County, Virginia. As of May 2021, it had 627 stations and 5,400+ bicycles, all owned by these local governments and operated by contractor Motivate International. Opened in September 2010, the system was the largest bike sharing service in the United States until New York City's Citi Bike began operations in May 2013.

Zagster is a venture-funded startup company based in Boston, Massachusetts that designs, builds and operates bike sharing programs for cities, universities, corporate campuses, hotels, and residential communities across the United States. As of July 2019, it operated over 200 bike sharing programs. The bicycle program was suspended in March 2020 due to the COVID-19 pandemic, and then the company terminated all operations in June 2020.

Bluebikes, originally Hubway, is a bicycle sharing system in the Boston metropolitan area. The system is owned by the municipalities of Boston, Cambridge, Everett, Somerville, and Brookline, and is operated by Motivate. The system uses technology provided by 8D Technologies, as well as PBSC Urban Solutions for bikes, parts, and docking stations. The bike share program officially launched in Boston as Hubway on July 28, 2011 with 61 stations and 600 bicycles. In the spring of 2012, more stations were added in Boston and neighboring municipalities of Brookline, Cambridge, and Somerville joined the system. As of December 2019, the system had deployed 325 stations with a fleet of over 3,500 bikes. In 2018, total members exceeded 19,000, with 8 million total system rides. Expansion continued in 2019, with the neighboring City of Everett joining the system.

Motivate LLC is a company based in New York City that services bicycle sharing systems and other urban services in the North America. The systems provide a flexible method for completing short trips, as contrasted with the longer rentals offered by traditional bike rental companies. In July 2018 a portion of the company was acquired by Lyft, with the service arm portion of the business staying private and renamed Motivate LLC.

Hangzhou Public Bicycle is a bicycle sharing system serving the city of Hangzhou. As of January 5, 2013, with 66,500 bicycles operating from 2,700 stations, it was the largest bike sharing system in the world, although it has since been overtaken by a number of dockless bike share operators such as Mobike. It is the first bike-sharing system in China. It plans to expand to 175,000 bikes by 2020.

Citi Bike is a privately owned public bicycle sharing system serving the New York City boroughs of the Bronx, Brooklyn, Manhattan, and Queens, as well as Jersey City, New Jersey. Named after lead sponsor Citigroup, it is operated by Motivate, with former Metropolitan Transportation Authority CEO Jay Walder as chief executive until September 30, 2018 when the company was acquired by Lyft. The system's bikes and stations use technology from Lyft.

Divvy is a bicycle sharing system in the City of Chicago and two adjacent suburbs operated by Lyft for the Chicago Department of Transportation. As of July 2019, it operated 5800 bicycles at 608 stations, covering almost all of the city, excluding Pullman, Rosedale, Beverly, Belmont Cragin and Edison Park.

Houston BCycle is a bicycle sharing system owned and operated by Houston Bike Share, a 501(c)(3) non-profit organization that administers bike sharing for the City of Houston.

Bay Wheels is a regional public bicycle sharing system in California's San Francisco Bay Area. It is operated by Motivate in a partnership with the Metropolitan Transportation Commission and the Bay Area Air Quality Management District. Bay Wheels is 'the first regional and large-scale bicycle sharing system deployed in California and on the West Coast of the United States. It was established as Bay Area Bike Share in August 2013. As of January 2018, the Bay Wheels system had over 2,600 bicycles in 262 stations across San Francisco, East Bay and San Jose.

Bike Share Toronto is a bicycle-sharing system located in Toronto, Canada. The system was launched in 2011 by PBSC under the BIXI brand. It was taken over by the Toronto Parking Authority (TPA) in 2014. Available year-round, the system consists of 6850 bicycles and 625 stations. As of 2020, the system covers over 200 square kilometres of Toronto — from Finch Avenue in the north, Rouge Park in the east, Lake Ontario to the south, and to Long Branch, Toronto to the west.

PBSC Urban Solutions, formerly the Public Bike System Company, is a bicycle-sharing system equipment vendor based in Longueuil, Quebec. The company develops bicycle-sharing systems, equipment, parts, and software, and sells its products to cities in Australia, Canada, the United States, the United Kingdom, and seven other countries. The company has sold about 90,000 bikes and 7,000 stations to 40 cities.

Biketown, also known as Biketown PDX, is a bicycle-sharing system in Portland, Oregon, that began operation on July 19, 2016. The system is owned by Portland Bureau of Transportation (PBOT) and operated by Lyft, with Nike, Inc. as the title sponsor. At launch, the system had 100 stations and 1,000 bicycles serving the city's central and eastside neighborhoods, with hopes to expand outward.

Bdood is a dockless bike-sharing company, located in Tehran, Iran. first featured in Iranian tech exhibition Elecomp 97 in 2018, it claims to be the first and exclusively the only bike-sharing business in Iran.