Cox City is an unincorporated community in Grady County, Oklahoma. [1] A post office operated in Cox City from 1927 to 1964. [2] The town was named after an oil man, Edwin B. Cox, from Ardmore, Oklahoma. [2] 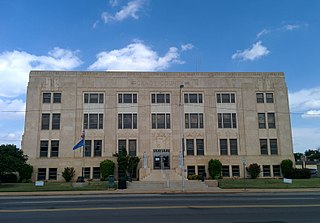 The Oklahoma Wranglers were a professional arena football team based in Oklahoma City, Oklahoma. They were members of the Central (1996–1997) and Western (1998–2001) Division of the American Conference of the Arena Football League (AFL). They previously played as the Memphis Pharaohs and Portland Forest Dragons. The team played at the Myriad, now known as the Cox Convention Center, in downtown Oklahoma City.

The Oklahoma City Dodgers are a Minor League Baseball team of the Pacific Coast League (PCL) and the Triple-A affiliate of the Los Angeles Dodgers. They are located in Oklahoma City, Oklahoma, and play their home games at Chickasaw Bricktown Ballpark which opened in 1998 in the city's Bricktown entertainment district. 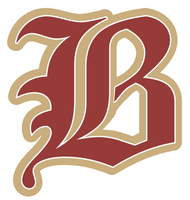 The Oklahoma City Blazers were a professional ice hockey team based in Oklahoma City, Oklahoma, that played in the Central Hockey League. The Blazers played at the Ford Center, located in downtown Oklahoma City. On July 2, 2009, the Blazers ceased operations after failing to reach a lease agreement with the city.

Chesapeake Energy Arena, originally known as the Ford Center from 2002 to 2010 and Oklahoma City Arena until 2011, is an arena located in Downtown Oklahoma City, Oklahoma, United States. It opened in 2002 and since 2008 has served as the home venue for the National Basketball Association (NBA)'s Oklahoma City Thunder. Previously, the arena was home to the Oklahoma City Blazers of the Central Hockey League (CHL) from 2002 until the team folded in July 2009, and the Oklahoma City Yard Dawgz of AF2 from 2004 to 2009 when the team moved to the Cox Convention Center. In addition to its use as a sports venue, Chesapeake Energy Arena hosts concerts, family and social events, conventions, ice shows, and civic events. The arena is owned by the city and operated by the SMG property management company and has 18,203 seats in the basketball configuration, 15,152 for hockey, and can seat up to 16,591 for concerts.

Cox Business Center is a 310,625 square foot facility in downtown Tulsa, Oklahoma with 102,600 square foot column-free exhibit hall space, Oklahoma's largest ballroom, and 34 meeting rooms. Cox Business Center (CBC) is managed by SMG-the world leader in venue management, marketing, and development and owned by the City of Tulsa. In the fiscal year 2015-2016, the economic impact of events held at the CBC was more than $33 million. The facility won the 2017 Venue Excellence Award from the International Association of Venue Managers, along with being chosen as the 2017 Top New or Renovated Meeting Site by Convention South and Best Event Center by Tulsa People readers.

The Cox Convention Center is a multi-purpose complex located in downtown Oklahoma City, Oklahoma. It is currently the home of the Oklahoma City Blue of the NBA G League.

News 9 Now and News on 6 Now are American regional digital broadcast television networks that are owned by Griffin Communications. The channels simulcast and rebroadcast local news programming seen on Griffin-owned CBS affiliates KWTV-DT in Oklahoma City and KOTV-DT in Tulsa, Oklahoma in their respective markets, along with select other programs. News 9 Now is broadcast on KWTV digital subchannel 9.2 in the Oklahoma City market, while News on 6 Now is broadcast on KOTV digital subchannel 6.3 in the Tulsa market. On cable, the individual channels are available on Cox Communications channel 53 in their respective markets.

Griffin Communications is a media company based in Oklahoma City, Oklahoma. The company began as a subsidiary of successful Muskogee-based Griffin Foods, which features a popular line of pancake and waffle syrups and other foods.

KRMG is a commercial AM radio station in Tulsa, Oklahoma. The station is owned by Cox Media Group and airs a conservative news/talk radio format, simulcast with co-owned 102.3 KRMG-FM.

KTBO-TV, virtual channel 14, is a TBN owned-and-operated television station licensed to Oklahoma City, Oklahoma, United States. The station is owned by the Trinity Broadcasting Network. KTBO's studios are located on Northeast 108th Street and East Hefner Road, and its transmitter is located near the John Kilpatrick Turnpike/Interstate 44, both on Oklahoma City's northeast side.

The Oklahoma Secondary School Activities Association (OSSAA), is an organization which organizes secondary school athletics and activities competitions at the state level. Derald Glover is its president. The OSSAA is a member of the National Federation of State High School Associations. 482 public and private schools are members of the OSSAA.

Theodore J.Cox was an American football and basketball player and coach. He served as the head football coach at River Falls State Normal School—now known as the University of Wisconsin–River Falls—from 1925 to 1926, at Tulane University from 1932 to 1935, and at Oklahoma Agricultural and Mechanical College—now known as Oklahoma State University–Stillwater—from 1936 to 1937, compiling a career college football record of 46–34–3. Cox was also the head basketball coach at River Falls State from 1925 to 1928, tallying a mark of 16–11. 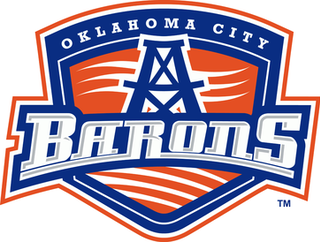 The Oklahoma City Barons were a professional ice hockey team in the American Hockey League (AHL). The team's first season was 2010–11. They played their home games at the Cox Convention Center, in Oklahoma City, Oklahoma.

The 2010 Oklahoma City Yard Dawgz season is the 7th season for the franchise, and the first in the Arena Football League, coming from the AF2, which dissolved following the 2009 season. The team was coached by Sparky McEwen and played their home games at the Cox Convention Center. The Yard Dawgz did not qualify for the postseason after finishing with a 6–10 record and placing 6th in the American Conference.

Marie C. Cox (1920-2005) was a Comanche activist who worked on legislation for Native American children. She received many accolades for her efforts including the 1974 Indian Leadership Award from the Bureau of Indian Affairs and state recognition that same year as the Outstanding Citizen of Oklahoma from Governor David Hall. She was named as an Outstanding Indian Woman of 1977 by the North American Indian Women's Association, and served on the National Advisory Council on Indian Education from 1983 to 1990. In 1993, she was inducted into the Oklahoma Women's Hall of Fame for her work with foster children and the founding of the North American Indian Women’s Association.