Cystadenoma (or "cystoma") is a type of cystic adenoma.When malignant, it is called cystadenocarcinoma.

When not otherwise specified, the ICD-O coding is 8440/0. However, the following classifications also exist:

The term "cystadenoma" may also refer to a hidrocystoma. [2]

A psammoma body is a round collection of calcium, seen microscopically. The term is derived from the Greek word ψάμμος (psámmos), meaning "sand". 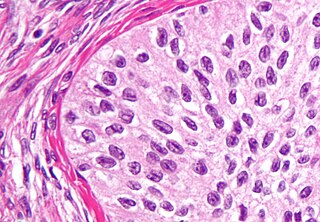 Surface epithelial-stromal tumors are a class of ovarian neoplasms that may be benign or malignant. Neoplasms in this group are thought to be derived from the ovarian surface epithelium or from ectopic endometrial or Fallopian tube (tubal) tissue. Tumors of this type are also called ovarian adenocarcinoma. This group of tumors accounts for 90% to 95% of all cases of ovarian cancer. Serum CA-125 is often elevated but is only 50% accurate so it is not a useful tumor marker to assess the progress of treatment. 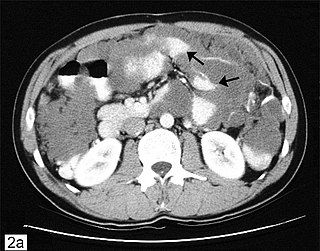 Pseudomyxoma peritonei (PMP) is a clinical condition caused by cancerous cells that produce abundant mucin or gelatinous ascites. The tumors cause fibrosis of tissues and impede digestion or organ function, and if left untreated, the tumors and mucin they produce will fill the abdominal cavity. This will result in compression of organs and will destroy the function of colon, small intestine, stomach, or other organs. Prognosis with treatment in many cases is optimistic, but the disease is lethal if untreated, with death by cachexia, bowel obstruction, or other types of complications. 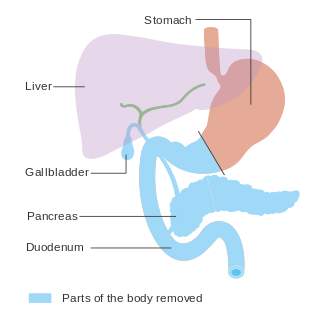 Appendix cancer are very rare cancers of the vermiform appendix.

Cystadenocarcinoma is a malignant form of a cystadenoma and is a cancer derived from glandular epithelium, in which cystic accumulations of retained secretions are formed. The neoplastic cells manifest varying degrees of anaplasia and invasiveness, and local extension and metastases occur. Cystadenocarcinomas develop frequently in the ovaries, where pseudomucinous and serous types are recognized. Similar tumor histology has also been reported in the pancreas, although it is a considerably rarer entity representing 1 - 1.5% of all Pancreatic cancer. 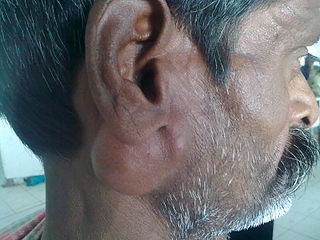 Cystic, mucinous, and serous neoplasms is a group of tumors. 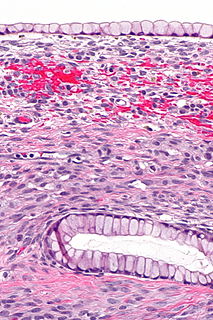 Mucinous cystadenoma is a benign cystic tumor lined by a mucinous epithelium. It is a type of cystic adenoma (cystadenoma). 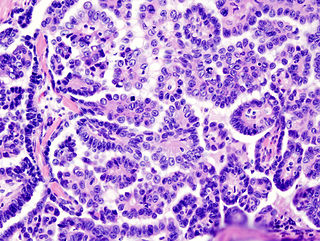 Papillary serous cystadenocarcinomas are the most common form of malignant ovarian cancer making up 26 percent of ovarian tumours in women aged over 20 in the United States. 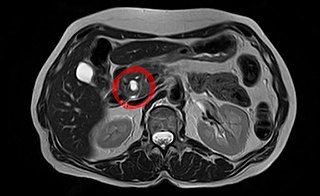 Mucinous cystadenocarcinoma of the lung (MCACL) is a very rare malignant mucus-producing neoplasm arising from the uncontrolled growth of transformed epithelial cells originating in lung tissue.

Pancreatic serous cystadenoma is a benign tumour of pancreas. It is usually found in the tail of the pancreas, and may be associated with von Hippel-Lindau syndrome.

Cystic lesions of the pancreas are a group of pancreatic lesions characterized by a cystic appearance. They can be benign or malignant.

A pancreatic cyst is a fluid filled sac within the pancreas.

Pancreatic mucinous cystic neoplasm (MCN) is a type of cystic lesion that occurs in the pancreas. Amongst individuals undergoing surgical resection of a pancreatic cyst, about 23 percent were mucinous cystic neoplasms. These lesions are benign, though there is a high rate of progression to cancer. As such, surgery should be pursued when feasible. The rate of malignancy present in MCN is between 11 and 38 percent. If resection is performed before invasive malignancy develops, prognosis is excellent. The extent of invasion is the single most important prognostic factor in predicting survival.