Newspapers of New England, based in Concord, New Hampshire, owns both the Gazette and the main daily to the north, The Recorder of Greenfield, Massachusetts. The Gazette also competes in its own coverage area with The Republican , a regional daily in Springfield.

First published September 6, 1786—with a news item about Shays' Rebellion—the Gazette is one of oldest newspapers in the country, [5] and had been owned by the DeRose family since 1929 before being sold for an undisclosed amount of money in 2005. The paper was sold to Newspapers of New England, said then-publisher and co-owner Peter L. DeRose, because there were no younger members of the family willing to take over the business. [6]

DeRose, who stayed on as publisher for another year under the new owners, became co-publisher upon the death of his father, Charles N. DeRose, in 1970. Charles' mother, Harriet Williams DeRose, had purchased the Gazette in 1929. Peter and his brother Charles W. DeRose were credited with moving the newspaper's offices to a modern building just outside downtown Northampton on Conz Street; paying and treating Gazette employees well; and being a pioneer in establishing an Internet presence, now known as gazettenet.com. [7]

Originally an afternoon newspaper, the Gazette responded to shifting readership demographics by moving its publication time earlier in the day, although it long resisted making the switch to early morning delivery on weekdays (the Saturday edition converted to morning distribution in the early 1970s). By the time of the Newspapers of New England sale, the Gazette was available at downtown newsstands as early as 11:30 a.m., although subscribers still had to wait until after mid-afternoon for delivery by schoolchildren. Under the new management, however, the Gazette opted to make the change to six-day morning publication in September 2006, partly to compete better with the rival Springfield Republican. [8]

In late 2007, Newspapers of New England purchased a competing alternative weekly newspaper, the Valley Advocate of Northampton. The Advocate had begun as an independent newspaper but was then owned by Advocate Weekly Newspapers, which also published weeklies in Connecticut. The Advocate's owner at the time, the Tribune Company, sold the Massachusetts weekly to focus on its Connecticut properties, which included the Hartford Courant daily. The Gazette's owners announced they would move the Valley Advocate offices to Northampton, but would retain separate news and advertising staffs from the daily. In late March 2020 the Valley Advocate stopped their print edition and went to online only. [4]

Holyoke is a city in Hampden County, Massachusetts, United States, that lies between the western bank of the Connecticut River and the Mount Tom Range. As of the 2010 census, the city had a population of 39,880. As of 2019, the estimated population was 40,117. Located 8 miles (13 km) north of Springfield, Holyoke is part of the Springfield Metropolitan Area, one of the two distinct metropolitan areas in Massachusetts. 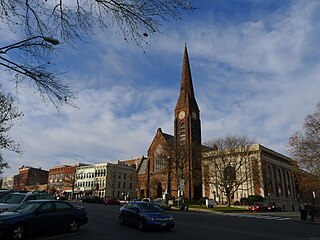 The city of Northampton is the county seat of Hampshire County, Massachusetts, United States. As of the 2010 census, the population of Northampton was 28,549. 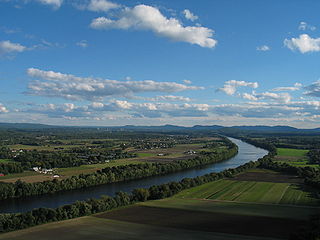 The Pioneer Valley is the colloquial and promotional name for the portion of the Connecticut River Valley that is in Massachusetts in the United States. It is generally taken to comprise the three counties of Hampden, Hampshire, and Franklin. The lower Pioneer Valley corresponds to the Springfield, Massachusetts metropolitan area, the region's urban center, and the seat of Hampden County. The upper Pioneer Valley region includes the smaller cities of Northampton and Greenfield, the county seats of Hampshire and Franklin counties, respectively.

The Concord Monitor is the daily newspaper for Concord, the state capital of New Hampshire. It also covers surrounding towns in Merrimack County, most of Belknap County, as well as portions of Grafton, Rockingham and Hillsborough counties. The Monitor has several times been named as one of the best small papers in America and in April 2008, became a Pulitzer Prize winning paper, when photographer Preston Gannaway was honored for feature photography.

Western Massachusetts is a region in Massachusetts, one of the six U.S. states that make up the New England region of the United States. Western Massachusetts has diverse topography; 22 colleges and universities, with approximately 100,000 students; and such institutions as Tanglewood, the Springfield Armory, and Jacob's Pillow.

The Republican is a newspaper based in Springfield, Massachusetts covering news in the Greater Springfield area, as well as national news and pieces from Boston, Worcester and northern Connecticut. It is owned by Newhouse Newspapers, a division of Advance Publications. During the 19th century the paper, once the largest circulating daily in New England, played a key role in the United States Republican Party's founding, Charles Dow's career, and the invention of the honorific "Ms." Despite the decline of printed media, The Republican was the 69th largest newspaper in 2017 with a circulation of 76,353, and has seen marked growth in its digital platform affiliate MassLive, with a record 6 million unique monthly visitors in June 2019.

WHYN is a commercial AM news/talk radio station licensed to Springfield, Massachusetts. It serves the Pioneer Valley area of Western Massachusetts and is owned by iHeartMedia. Studios and offices are on Main Street in Springfield. The transmitter is on County Road in Southampton. WHYN operates at 5,000 watts by day, using a directional antenna, but must reduce power to 1,000 watts at night to avoid interfering with other stations on 560 kHz.

CTNow is a free weekly newspaper in central and southwestern Connecticut, published by the Hartford Courant.

Newspapers of New England, Inc. (NNE) is a privately owned publisher of nine daily and weekly newspapers in the U.S. states of Massachusetts and New Hampshire.

The Valley News is a seven-day morning daily newspaper based in Lebanon, New Hampshire, covering the Upper Valley region of New Hampshire and Vermont, in the United States.

The Holyoke Transcript-Telegram, or T‑T, was an afternoon daily newspaper covering the city of Holyoke, Massachusetts, United States, and adjacent portions of Hampden County and Hampshire County.

Turley Publications Inc. is a privately owned commercial printer and publisher of more than a dozen weekly newspapers based in Palmer, Massachusetts, United States.

Union Station is a historic building in Northampton, Massachusetts, that served as a train station from 1897 until 1987. Built at the close of the nineteenth century, the structure incorporates many features of the Richardsonian Romanesque architectural style. The buff brick masses of the station are trimmed with red Longmeadow brownstone and hooded by red tile roofs. Steep dormers protrude from the roofline. The interior once featured Italian marble floors, oak woodwork, and a large fireplace.

Alex B. Morse is an American politician serving as the 44th and current mayor of Holyoke since 2012. A member of the Democratic Party, at age 22, he was elected the youngest mayor of Holyoke. He has been reelected three times; his current term expires in January 2022, after which he will become the town manager of Provincetown. 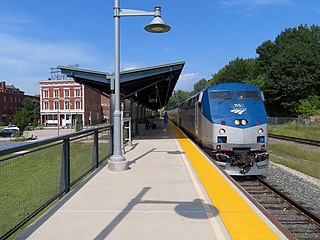 Holyoke is an Amtrak intercity train station near the corner of Main and Dwight streets in Holyoke, Massachusetts, United States. The station opened on August 27, 2015, eight months after Amtrak's Vermonter service was re-routed to the Conn River Line through the Pioneer Valley.

The Connecticut River Line is a railroad line owned by the Massachusetts Department of Transportation (MassDOT), that serves the "Knowledge Corridor" between Springfield and East Northfield, Massachusetts. 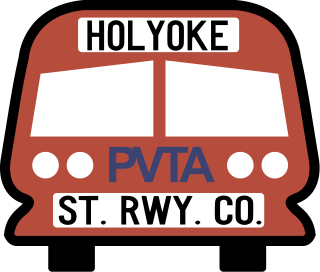 The Holyoke Street Railway (HSR) was an interurban streetcar and bus system operating in Holyoke, Massachusetts as well as surrounding communities with connections in Amherst, Belchertown, Chicopee, Easthampton, Granby, Northampton, Pelham, South Hadley, Sunderland, Westfield, and West Springfield. Throughout its history the railway system shaped the cultural institutions of Mount Tom, being operator of the mountain's famous summit houses, one of which hosted President McKinley, the Mount Tom Railroad, and the trolley park at the opposite end of this funicular line, Mountain Park. 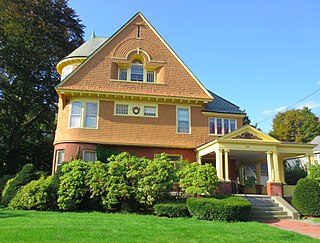 Roswell Field Putnam (1840–1911) was the foremost residential architect in Amherst and Northampton, Massachusetts, in the last two decades of the 19th century. He designed more than 35 sizable houses in those two towns and several in nearby communities.