Last updated September 03, 2021
This article is about the Filipino newspaper. For other newspapers with names like Daily Tribune, see Daily Tribune (disambiguation).

The Daily Tribune, as it was called then, was founded on February 1, 2000, by a group of journalists from the then-defunct The Philippine Post led by then-Editor-in-Chief and Founding Chairman Ninez Cacho-Olivares. On June 1, 2018, Concept and Information Group, publisher of the online Concept News Central, acquired the paper from Cacho-Olivares. [1] With the change of hands, "The" from The Daily Tribune has been dropped.

On February 24, 2006, the Tribune was raided by the Philippine National Police at the height of the State of Emergency imposed by Arroyo. The police presence remained in the paper's office until the State of Emergency was lifted on March 4, 2006. The paper continued to publish normally, making defiant statements throughout. Ninez Cacho-Olivarez, the paper's publisher, claimed that some of her reporters were practising self-censorship, but her own publishing decisions were unaffected. She received substantial publicity and her circulation expanded significantly during the crisis; however, she lost many advertisers who were intimidated by the unstable political situation. The Tribune is now said to face sedition charges, and it is unclear whether they will be in any way effective against the newspaper.

During the campaign period for the 2010 elections, the paper threw all its support behind former President Joseph Estrada and his running mate (former Vice-President), Jejomar Binay, because the editor is a member of their political party, Pwersa ng Masang Pilipino.[ citation needed ]

The paper had been particularly critical of President Benigno S. Aquino III, presenting what it claims to be a more balanced or unbiased view of his administration and its efforts to prosecute Arroyo. It willingly and openly criticizes the sitting president as opposed to other newspapers which usually feature and support the government's position.[ citation needed ]

Judge Winlove Dumayas of Regional Trial Court Branch 59, Makati on June 5, 2008, found Cacho-Olivarez, publisher of The Daily Tribune, guilty of libel and sentenced her to a minimum of six months and a maximum of two years imprisonment. She was also ordered to pay ₱5 million (US$ 113,636) in moral damages and ₱33,732.25 in civil damages, including a libel fine of ₱4,000, for writing a June 23, 2003 column that accused then-Ombudsman Simeón Marcelo of colluding with the supposedly influential law firm, Villaraza, Cruz, Marcelo & Angangco in the Ninoy Aquino International Airport Terminal 3 deal. [2] Villaraza, Cruz, Marcelo & Angangco (colloquially known as 'The Firm') stated that it will prosecute 47 more libel suits against the publisher of The Daily Tribune. [3]

In February 2006, the office of The Daily Tribune was searched by police during a plot to topple the Arroyo government that resulted in the imposition of the State of Emergency. [4] [5]

The Philippines was under a state of emergency, announced by presidential spokesperson Ignacio Bunye on the morning of February 24, 2006, by the virtue of Proclamation No. 1017. This occurred after the government claimed that it foiled an alleged coup d'état attempt against the rule of President Gloria Macapagal Arroyo earlier that same day. State security services also claimed that it had arrested a general who was involved in the coup attempt. President Arroyo lifted the state of emergency on March 3, 2006, by the virtue of Proclamation No. 1021.

This article covers the history of the Philippines following the 1986 People Power Revolution, known as the Fifth Philippine Republic.

Jejomar "Jojo" CabauatanBinay is a Filipino politician who served as the 13th Vice President of the Philippines under President Benigno Aquino III.

Conchita Carpio-Morales is a former Ombudsman of the Philippines serving from 2011 to 2018. Prior to her appointment as Ombudsman, she held the post of Associate Justice of the Supreme Court of the Philippines, served in the Lower Courts, as well as in the Department of Justice. She has secured appointments from five Philippine presidents: Ferdinand Marcos, Corazon Aquino, Fidel Ramos, Gloria Macapagal Arroyo, and Benigno "Noynoy" Aquino III.

Genuine Opposition (GO) was the political multi-party electoral alliance of the parties senatorial line-up for the 2007 Philippine midterm elections, which is in opposition to President Gloria Macapagal Arroyo. It was originally called the United Opposition (UNO), created by opposition stalwart and Makati Mayor Jejomar Binay in June 2005 to unite all politicians who wanted to impeach President Gloria Macapagal Arroyo. UNO then reorganized itself and changed its name to Grand and Broad Coalition (GBC), with the UNO party under that coalition. On February 15, 2007, the group changed its name again to Genuine Opposition after a meeting with Senate President Manny Villar in his office in Las Piñas and because of the defection of former opposition senators Edgardo Angara, Teresa Aquino-Oreta and Tito Sotto to GMA's senatorial slate.

Ninez Cacho-Olivares was a Filipino veteran journalist, having been one for over 20 years, as a feature writer and political columnist in various Manila broadsheets such as the Bulletin Today, Philippine Daily Inquirer, Business Day and Business World. She was publisher and editor-in-chief for the Philippine Post prior to becoming The Daily Tribune's Publisher and Editor-in-chief. 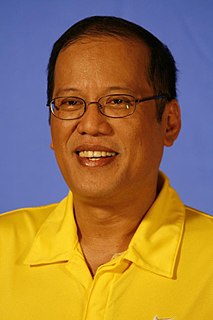 The Philippine presidential and vice presidential elections of 2010 were held on Monday, May 10, 2010. The ruling President of the Philippines, Gloria Macapagal Arroyo, was ineligible to seek re-election as per the 1987 Constitution, thus necessitating an election to select the 15th President. 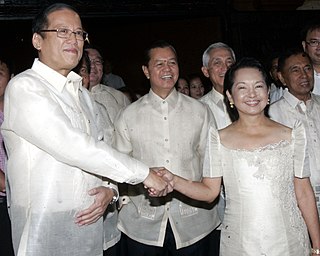 The Noynoy-Binay campaign or NoyBi began when Senator Francis Escudero endorsed the candidates Benigno "Noynoy" Aquino III and Jejomar Binay as president and Vice President respectively. This was done without the consent of the two candidates, especially since Escudero, Binay, and Aquino all come from different political parties. Aquino had Manuel "Mar" Roxas II as his running mate for vice president, while Binay was the Vice Presidential candidate of Joseph Estrada, who was aiming to be elected president for a second time. The campaign was nonetheless successful as Aquino and Binay were elected as President and Vice President of the Philippines.

Jejomar Erwin "Junjun" Sombillo Binay Jr. is a Filipino politician who served as the mayor of Makati from 2010 to 2015. He was initially dismissed from office by the Ombudsman of the Philippines but this decision was overturned by the Court of Appeals in a ruling dated May 3, 2018. He is perpetually banned from holding public office after the Court of Appeals affirmed on May 28, 2019, charges of grave misconduct, dishonesty and conduct prejudicial to the best interest of the service over the construction of a Makati school building. He is the only son of former Vice President Jejomar Binay. 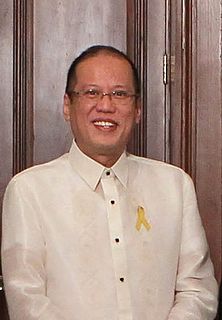 The presidency of Benigno Aquino III began at noon on June 30, 2010, when he became the fifteenth president of the Philippines, succeeding Gloria Macapagal Arroyo. Aquino is the third-youngest person to be elected president, and the fourth-youngest president after Emilio Aguinaldo, Ramon Magsaysay and Ferdinand Marcos.

The 2010 presidential campaign of Benigno Aquino III, then Philippine Senator, began when he announced his candidacy for the presidency of the Philippines at the Club Filipino, North Greenhills, San Juan, Metro Manila, on September 9, 2009, 40 days after the death of his mother, former President Corazon Aquino. On September 21, 2009, Aquino's campaign announced that Senator Mar Roxas would be his vice presidential nominee.

The United Nationalist Alliance is a political party in the Philippines. It was created as a multi-party electoral alliance replacing the former United Opposition (UNO) coalition for the 2013 midterm elections, before it was launched as a single political party on July 1, 2015 by Jejomar Binay for his candidacy in the 2016 presidential election. 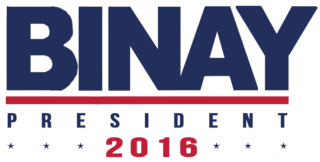 The 2016 presidential campaign of Jejomar Binay, former Mayor of Makati and then-incumbent Vice President of the Philippines, was announced on July 1, 2015, during the launch of the United Nationalist Alliance as a political party at the Makati Coliseum. 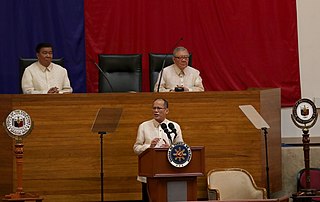