Diario de Manila was a Spanish language newspaper published in the Philippines, founded on October 11, 1848, and closed down by official decree on February 19, 1898, after the colonial authorities discovered that its installations were being used to print revolutionary material.

The Diario was edited by Felipe del Pan and published by the Ramirez y Compañia, whose headquarters were in Intramuros, Manila, and its business and editorial offices in Binondo.

The first daily of Manila, La Esperanza, had been founded on December 1, 1846. Diario de Manila raised as a competitor just a couple of years later, during a time when a great number of native newspapers written in Spanish came into existence in the Philippines,

Isabelo de los Reyes, a prominent Filipino politician, writer and labor activist in the 19th and 20th centuries, who was the founder of the Aglipayan Church, worked as a journalist and wrote several articles for the newspaper, such as the “Invasión de Limahong”, which appeared in the Diario de Manila in November 1882. He eventually became the associate editor of the Diario.

Enrique Gaspar y Rimbau, a Spanish diplomat and writer, author of plays, operas and novels, wrote for the Diario de Manila while serving as consul in Hong Kong.

Baltasar Giraudier, a famous French-Filipino artist and writer who published his work in both the Diario de Manila and in the Ilustración Filipina , accompanied Governor-General Malcampo to Jolo during an organized military expedition that took place in February 1876 against Muslim pirates who had been receiving a substantial amount of arms and ammunition during the previous years. Governor-General Malcampo commissioned Giraudier to illustrate the landscape of the island together with its people, customs and architecture. The resulting drawings are considered to be among the best lithographic illustrations of the Islands.

An article published in Diario de Manila by the Jesuit Father Jaime Nonell, which described observations of the typhoon of September 1865 done by Father Francisco Colina, prompted the establishment of the Observatorio Meteorológico del Ateneo Municipal de Manila.

Camilo Millán y Villanueva, former governor of several provinces in the Archipelago and government adviser, raised the issue of the reforms for the Philippines in an article published in 1897 titled "El gran problema de las reformas en Filipinas". [1]

In 1894 Emilio Jacinto started editing Kalayaan (Freedom), the Katipunan's official publication, thanks to the printing press of the Diario de Manila, and using typefaces stolen from the printing room by Filipino employees who were also members of the Katipunan. [2] They conducted their activities under the unsuspecting eyes of the Spanish management, who were mostly active members of the Spanish colonial reserve forces. Most of their secret activities took place during the two-and-a-half hour lunch breaks when the Spanish personnel took their meals and their siesta.

On August 19, 1896, Teodoro Patiño, who was on strong disagreement with press foreman and Katipunan member, Apolonio de la Cruz, over a salary increase and claimed he was also being made responsible for the loss of the printing supplies that were used for the printing of Kalayaan, told the entire story to his sister Honoria, who was then living with nuns in a Mandaluyong orphanage. [3]

Honoria was deeply disturbed by her brother's revelation and decided to inform the orphanage’s Mother Superior, Sister Teresa de Jesús, about the existence of the secret society. Sister Teresa in turn sought the advice of Father Mariano Gil, the parish priest of Tondo, who accompanied by several Guardia Civil immediately searched the premises of Diario de Manila and found evidence of the Katipunan’s existence. They quickly informed the Governor-General Blanco, who padlocked the printing press and arrested de la Cruz, who was found in possession of a dagger used in Katipunan initiation rites, and dozens of other suspected Katipunan members. De la Cruz was later executed on February 6, 1897 in Bagumbayan. 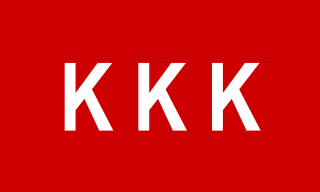 The Kataastaasan, Kagalanggalangang Katipunan ng mga Anak ng Bayan, also known as Katipunan or KKK, was a Philippine revolutionary society founded by anti-Spanish colonialism Filipinos in Manila in 1892; its primary goal was to gain independence from Spain through a revolution. 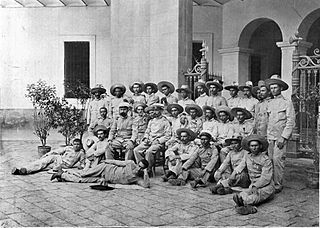 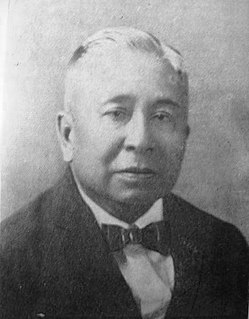 Isabelo de los Reyes y Florentino, also known as Don Belong, was a prominent Filipino politician, writer and labor activist in the 19th and 20th centuries. He was the original founder of the Iglesia Filipina Independiente, an independent Philippine national church. He is now known as the "Father of Philippine Folklore", the "Father of the Philippine Labor Movement", and the "Father of Filipino Socialism".

Epifanio de los Santos y Cristóbal, sometimes known as Don Pañong or Don Panyong was a noted Filipino historian, journalist, and civil servant. He was appointed Director of the Philippine Library and Museum by Governor General Leonard Wood in 1925. 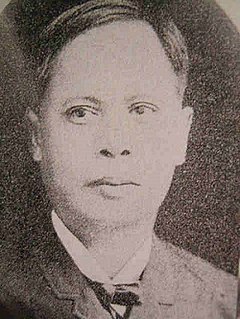 Deodato Arellano was a propagandist and first president of the Katipunan. He was born to Juan de la Cruz and Mamerta de la Cruz on July 26, 1844 in Bulacan. The family changed their name to Arellano in compliance with the Claveria decree of 1849. Arellano studied bookkeeping at the Ateneo Municipal de Manila. He also worked as an assistant clerk at the arsenal of the military's artillery corps. He married Marcelo H. del Pilar’s sister, Hilaria del Pillar, on April 22, 1877, after his first wife, Paula Rivera, died.

The Cry of Balintawak, was the beginning of the Philippine Revolution against the Spanish Empire.

José Palma y Velásquez was a Filipino poet and soldier. He was on the staff of La Independencia at the time he wrote Filipinas, a patriotic poem in Spanish. It was published for the first time in the issue of the first anniversary of La Independencia on 3 September 1899. The poem fit the instrumental tune Marcha Nacional Filipina by Julián Felipe, and it has since been the basis for every translation of the Philippine National Anthem.

Emilio Jacinto was a Filipino General during the Philippine Revolution. He was one of the highest-ranking officers in the Philippine Revolution and was one of the highest-ranking officers of the revolutionary society Kataas-taasan, Kagalang-galang na Katipunan ng mga Anak ng Bayan, or simply and more popularly called Katipunan, being a member of its Supreme Council. He was elected Secretary of State for the Haring Bayang Katagalugan, a revolutionary government established during the outbreak of hostilities. He is popularly known in Philippine history textbooks as the Brains of the Katipunan while some contend he should be rightfully recognized as the "Brains of the Revolution". Jacinto was present in the so-called Cry of Pugad Lawin with Andrés Bonifacio, the Supremo of the Katipunan, and others of its members which signaled the start of the Revolution against the Spanish colonial government in the islands.

Marcelo Hilario del Pilar y Gatmaitán, commonly known as Marcelo H. del Pilar and also known by his pen name Plaridel, was a Filipino writer, lawyer, journalist, and freemason. Del Pilar, along with José Rizal and Graciano López Jaena, became known as the leaders of the Reform Movement in Spain.

Ilustración Filipina was a Spanish language magazine published in the Philippines, that was founded on March 1, 1859, and ran until December 15, 1860. 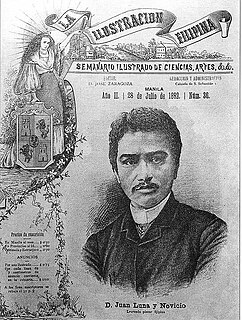 La Ilustración Filipina was a Spanish language newspaper published in Manila, Philippines, that ran during the last decade of the Spanish colonial era, and at times during the Philippine Revolution and the beginning of the 20th century under U.S. rule.

General Vicente Álvarez was a Zamboangueño revolutionary general who led the revolution in Zamboanga which forced the surrender of the last Spanish Governor-General of the Philippines, Diego de los Rios, effectively ending the Spanish occupation in the Philippines.

This is a list of notable events that happened in the Philippines in the year 1897.

Freemasonry or Masonry refers to a civic movement promoting fraternity and good works. Freemasonry defines itself as “a regular system of morality, veiled in allegory and illustrated by symbols.” In particular masonic meetings are characterized by initiations and rituals. As such masonry has been viewed historically by churches and governments as secret societies.

Bonifacio: Ang Unang Pangulo is a 2014 Philippine historical action drama film centering on the life of Katipunan revolutionary Andres Bonifacio. It is an official entry to the 40th Metro Manila Film Festival.

The Liwasang Bonifacio, also known by its former name, Plaza Lawton, is a city square and transport hub in front of the Manila Central Post Office in the Ermita district of Manila, Philippines. It lies at the south end of Jones Bridge, MacArthur Bridge and Quezon Bridge that link the northern districts of Binondo, Santa Cruz and Quiapo to the central district of Ermita. The plaza straddles the dividing line between Ermita and Intramuros and is the starting point of Padre Burgos Avenue which connects to Taft Avenue and Roxas Boulevard in Rizal Park.

Zoilo Hilario was a Filipino poet, playwright, lawmaker and linguist. He is known for his poems written in both the Spanish and Kapampangan. languages, as well as a distinguished researcher of the Kulitan script and Kapampangan orthography.