The Philippine Daily Inquirer was founded on 9 December 1985 by publisher Eugenia Apóstol, columnist Max Solivén, together with Betty Go-Belmonte during the last days of the regime of the President Ferdinand Marcos, becoming one of the first private newspapers to be established under the Marcos regime. [4]

The Inquirer succeeded the weekly Philippine Inquirer, [4] created in 1985 by Apostol to cover the trial of 25 soldiers accused of complicity in the assassination of opposition leader Benigno Aquino Jr. at the Manila International Airport on August 21, 1983. Apostol also published the Mr. & Ms. Special Edition , a weekly tabloid opposed to the Marcos regime. [4]

As the successor to the previous Mr. & Ms. Special Edition and the weekly Philippine Inquirer, it was founded on a budget of P1 million and enjoyed a daily circulation of 30,000 in its early days. The new daily was housed in the dilapidated one-story Star Building on 13th and Railroad streets in Port Area, Manila. It was put out by 40 editors, reporters, correspondents, photographers and other editorial employees working in a 100 square meter newsroom. Columnist Louie Beltran was named its editor-in-chief.

The newspaper was instrumental in documenting the campaign of Corazon Aquino during the 1986 presidential elections and, in turn, the 1986 People Power Revolution. Its slogan, Balanced News, Fearless Views, was incorporated to the newspaper in January 1986 after a slogan-making contest held during the first month of the Inquirer's existence. [4] In this period, the newspaper reached a high circulation of 500,000 copies a day.

In July 1986, questions about finances and a divergence of priorities caused a rift among the founders that led Belmonte, Soliven, and Art Borjal's split from the Inquirer to establish The Philippine Star . [5] As Belmonte owned the Star Building where the Inquirer was headquartered, the newspaper amicably transferred to the Soliven-owned BF Condominium on Aduana Street, Intramuros. [5]

In February 1987, Federico D. Pascual, former assistant managing editor of the Daily Express, was named executive editor of Inquirer and was appointed editor-in-chief two years later. [4] It was during his term in 1990 that the Inquirer took the lead from the Manila Bulletin to become the Philippines' largest newspaper in terms of circulation.

However, in July 1990, the Inquirer headquarters in Intramuros was damaged by the 1990 Luzon earthquake. On January 5, 1991, the newspaper transferred to the YIC building along United Nations Avenue and Romualdez Street in Malate.

Inquirer's longest-serving and first woman editor-in-chief, the late Letty Jimenez-Magsanoc, [6] was appointed on June 14, 1991. She was a former columnist and editor of the Panorama Sunday magazine of Bulletin Today (now Manila Bulletin) who was sacked for writing articles poking fun at Marcos. She edited Mr & Ms Special Edition until the fall of the Marcos regime. She was also the first editor-in-chief of Sunday Inquirer Magazine. [7]

Under her term, in 1995, the Inquirer moved to its current headquarters in Makati after transferring headquarters four times.

Then-President Joseph Estrada accused the Inquirer of "bias, malice, and fabrication" against him, charges that the newspaper denied. In 1999, several government organizations, pro-Estrada businesses, and movie producers simultaneously pulled their advertisements from the Inquirer in a boycott that lasted for five months. [8] Malacañang Palace was widely implicated in the advertising boycott, which publisher Isagani Yambot denounced as an attack on the freedom of the press. [8]

In 2017, according to the survey conducted by AGB Nielsen, the Inquirer was the most widely-read newspaper in the Philippines. The Manila Bulletin and The Philippine Star followed as the second and the third most widely read papers, respectively. [9] Magsanoc died on December 24, 2015, at St. Luke's Medical Center in Taguig. [7] [10] A month after her death, Jimenez-Magsanoc was recognized as the Filipino of the Year 2015 by the Inquirer.

On February 2, 2016, the Inquirer appointed its managing editor Jose Ma. Nolasco as the executive editor, the new top position of the newspaper, replacing the traditional editor-in-chief position used by the Inquirer for more than three decades. [11]

According to the company's website the newspaper has over 2.7 million nationwide readers daily, it enjoys a market share of over 50% and tops the readership surveys. [12]

At least two opinion pieces cite the Daily Inquirer as the Philippines' newspaper of record, but as an opportunity for criticism: The Manila Times criticized it for "publish[ing] ... vapid, unthinking positions" which it called "reprehensible, at best"; [13] GMA News , in 2014, noted it as a "de facto paper of record", followed by "This distinguished history only makes it more painful to say that the paper is starting to suck". [14]

Maximo Villaflor Soliven was a Filipino journalist and newspaper publisher. In a career spanning six decades, he founded the Philippine Star and served as its publisher until his death.

The Varsitarian is the official student publication of the University of Santo Tomas (UST). Founded in January 1928 by a group of students led by Jose Villa Panganiban, it is one of the first student newspapers in the Philippines. It is published fortnightly. The lampoon issue is called The Vuisitarian. Tomas U. Santos, the mascot of The Varsitarian, is a Thomasian who represents the students of the campus. He is usually seen accompanied by a talking, and quite cynical, T-square. 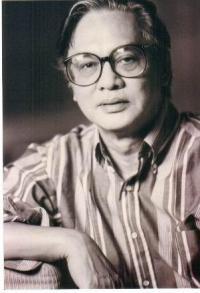 Adrian E. Cristobal was a Filipino writer who frequently touched on political and historical themes. Perhaps best known to the public for his "Breakfast Table" newspaper column, he was also a Palanca Award-winning playwright, fictionist and essayist. He likewise held several positions in government during the administration of President Ferdinand E. Marcos.

Kara Magsanoc-Alikpala is a Philippine broadcast journalist who produces news documentaries. When diagnosed with breast cancer in 1997, she fought the disease with the help of doctors and survived. She founded the advocacy organization ICanServe which has the mission of arming "women with breast care health and breast cancer information through high impact campaigns." In addition, Magsanoc-Alikpala is the managing director of Manila-based Asianeye Productions and a contributing producer to CNN. She was selected as one of three celebrity critics for the Philippine reality-show "Dokyu". She lives and works in Manila.

Mr. & Ms. Special Edition was a weekly opposition tabloid magazine published from 1983 to 1986 that played a pivotal role in bringing about the downfall of the regime of Philippine President Ferdinand Marcos. 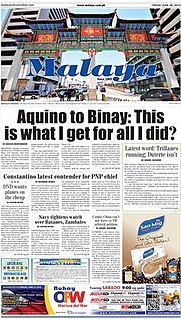 Isagani M. "Gani" Yambot was a Filipino journalist who served as the publisher of the Philippine Daily Inquirer from 1994 until his death in 2012.

Rina Jimenez-David is notable as a Philippines journalist and columnist for the Philippine Daily Inquirer. She is an advocate for women's health issues. She was awarded Best Columnist for Excellence in Population Reporting at the Global Media Awards in 2004 and the TOWNS award in 2013. She was a judge in a contest to select outstanding teachers. She met with Philippine president Noynoy Aquino and other journalists and politicians in 2012. She was the managing editor of a publication about her Jimenez family genealogy entitled In Search of Family published in 2001. She lived in Alaminos, Pangasinan, graduated from the University of Santo Tomas in 1976, and joined the broadsheet newspaper Philippine Daily Inquirer in 1988. She studied journalism at the Johns Hopkins University School of Public Health in Baltimore. Her book Women at Large was a finalist in the Philippine National Book Awards in 1994.

Billie Mary "Betty" Chua Go-Belmonte was a Filipina journalist and newspaper publisher. She established the STAR Group of Publications which publishes the national newspaper, The Philippine Star and The Freeman, the tabloids Pilipino Star Ngayon, Pang-Masa, and Banat, as well as the magazines Starweek, People Asia, and The Fookien Times Yearbook.

Batas Militar is a 1997 Filipino television documentary film about martial law under Ferdinand Marcos, and the ouster movement against him, the People Power Revolution. The film was directed by Jon Red and Jeannette Ifurung, with the former focusing on dramatizations.

Antonio Ma. "Tony" Onrubia Nieva was a Philippine journalist, union organizer, and activist. He worked to defend press freedom and the rights of workers, and campaigned to end dictatorship in the Philippines. He led the National Press Club as president and founded the National Union of Journalists of the Philippines. He was secretary general of the International Organization of Journalists based in Prague, Czech Republic, from 1995 up to the time of his death in 1997. His name is on the Bantayog ng mga Bayani Wall of Remembrance, for his contributions to the fight against injustices of the dictatorship under President Ferdinand E. Marcos.

Jose ("Joe") Guevara was a Filipino journalist, political commentator and art collector. Guevara was born in Tanauan, Batangas and earned his pre-law and law degrees at University of Santo Tomas, and later earned a master's degree in journalism from the same university. He began his career in journalism in 1938 as the editor-in-chief of The Varsitarian, the student newspaper at his university. He briefly worked as an attorney in the law office of Jose P. Laurel, who was later president of the Philippines, before returning to journalism.

Maria Ceres P. Doyo is a Filipino journalist, author, human rights activist, and feminist best known as a columnist and staff writer for the Philippine Daily Inquirer, for her numerous books on Philippine journalism, and for the historical impact of her investigative reports during the martial law under Ferdinand Marcos.

Wikimedia Commons has media related to Philippine Daily Inquirer .
This page is based on this Wikipedia article
Text is available under the CC BY-SA 4.0 license; additional terms may apply.
Images, videos and audio are available under their respective licenses.