The Jeepney Magazine is the street newspaper sold by poor and homeless in the Philippines. It was launched in March 2008 with two purposes: to write for and about the poor, and to provide them with jobs to make a living. It is sold for 100 pesos, half of which the seller keeps. Selling 10 copies per day is expected to eventually let the sellers exceed the minimum wage by 40 percent. The Jeepney Magazine is published by the Urban Opportunities for Change Foundation and is a member of the International Network of Street Papers. The name refers to the Jeepney, the most popular means of public transportation in the Philippines and a symbol of Philippine culture. [1] [2]

Street newspapers are newspapers or magazines sold by homeless or poor individuals and produced mainly to support these populations. Most such newspapers primarily provide coverage about homelessness and poverty-related issues, and seek to strengthen social networks within homeless communities. Street papers aim to give these individuals both employment opportunities and a voice in their community. In addition to being sold by homeless individuals, many of these papers are partially produced and written by them.

Jeepney Magazine is written in English, and a Tagalog translation is under consideration. [2] It won the 2009 International Street Paper Award for Best Interview. [3] [4] The biggest challenge is finding safe and legal places where vendors can sell the magazine. [1]

Transportation in the Philippines is relatively underdeveloped, partly due to the country's mountainous areas and scattered islands, and partly as a result of the government's persistent underinvestment in the nation's infrastructure. In recent years, however, the Philippine government has been pushing to improve the transportation system in the country through various infrastructure projects. 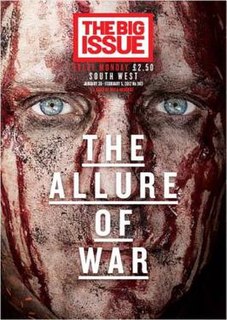 The Big Issue is a street newspaper founded by John Bird and Gordon Roddick in September 1991 and published in four continents. The Big Issue is one of the UK's leading social businesses and exists to offer homeless people, or individuals at risk of homelessness, the opportunity to earn a legitimate income, thereby helping them to reintegrate into mainstream society. It is the world's most widely circulated street newspaper.

Real Change is a weekly progressive street newspaper based in Seattle, Washington, USA written by professional staff and sold by self-employed vendors, many of whom are homeless. The paper provides them with an alternative to panhandling and covers a variety of social justice issues, including homelessness and poverty. It became weekly in 2005, making it the second American street newspaper ever to be published weekly. Real Change is a 501(c)(3) non-profit organization with an annual budget of 950,000 dollars. 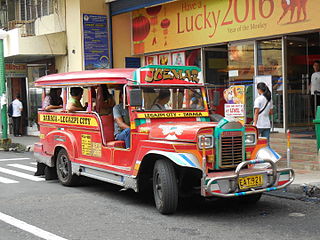 Jeepneys, sometimes called simply jeeps, are buses and the most popular means of public transportation ubiquitous in the Philippines. They are known for their crowded seating and kitsch decorations, which have become a wide spread symbol of Philippine culture and art. A Sarao jeepney was exhibited at the Philippine pavilion at the 1964 New York World's Fair as a national image for the Filipinos.

StreetWise is a street magazine sold by people without homes or those at-risk for homelessness in Chicago. Topics covered depend on what is happening in Chicago at the time. In 2003, it had the largest readership of any street publication in the United States of America. Today, it remains among the largest street newspapers in the nation.

.ph is the Internet country code top-level domain (ccTLD) for the Philippines.

The Manila Bulletin, is the Philippines' largest English language broadsheet newspaper by circulation, followed by the Philippine Daily Inquirer. It bills itself as "The Nation's Leading Newspaper", which is its official slogan.

Samuel Lawrence Lopez Concepcion is a Filipino singer, dancer, actor, VJ and host. Concepcion emerged as the winner for the Big Division of Little Big Star`s Season 1 in April 2006. Concepcion currently has a contract under STAGES and ABS-CBN's Star Magic. Concepcion began with a total of 12 theater roles and participated in various plays even at a young age, including the role of Edmund Pevensie in the local stage adaptation of The Lion, The Witch, and The Wardrobe and Mr. Noah’s Big Boat. He has been in the role of Peter Pan from 2002 to 2012. Aside from theater roles, he has acted in movies including Way Back Home and Shake, Rattle & Roll 13. He acted in his first lead role in 2012 in the first Filipino musical-film entitled, I Do Bidoo Bidoo: Heto nAPO Sila!. He had his first role in television in ABS-CBN's Mga Anghel na Walang Langit, and his major break as Boy Bawang in the fantasy series Super Inggo.

Street Sense is a bi-weekly newspaper sold by self-employed homeless distributors ("vendors") on the streets of Washington, D.C., the capital city of the United States. It is published by the 501(c)(3) nonprofit Street Sense Media, which also produces documentary filmmaking, photography, theatre, illustration and poetry. The organization says this media, most of which is created by homeless and formerly homeless people, is designed to break down stereotypes and educate the community.

Street Roots is a weekly alternative newspaper establish in 1998 that is sold by and for the homeless in Portland, Oregon, United States. The paper is published every Friday and sold through vendors who are currently or formerly homeless. The paper has a homeless advocacy editorial position. Vendors purchased the paper for 25 cents and sold them for $1 and kept the difference of 75 cents. The paper features alternative news, interviews, and poetry written by local journalists as well as people experiencing homelessness or working with the homeless. Street Roots is a member of the North American Street Newspaper Association and the International Network of Street Papers.

The Homeless Grapevine was a street newspaper sold by homeless in Cleveland, Ohio, United States. It was published by the Northeast Ohio Coalition for the Homeless (NEOCH) from 1992 to 2009. Vendors bought the paper for 25 cents per copy and sell them for 1 dollar. The papers attempted to be a voice for the homeless and content was entirely dedicated to homeless issues, much of it written by current or former homeless. It was a monthly magazine of 16 pages and as of 2004 had a circulation of 5,000 copies sold by 15–20 vendors. Sellers were often at The West Side Market, Public Square, E. 9th St., East 12th and Coventry.

The Big Issue Malawi is a street paper in Malawi. It is a bimonthly magazine sold only by homeless individuals. The project's facilitator is a local charity known as the "Culture Awakening Society"

The Contributor is a bi-weekly street newspaper published in Nashville, Tennessee, United States. The publication's content focuses on primarily social justice issues as they are framed by politics, music, art, culture, sports, homelessness and poverty. It is written by local journalists as well as people experiencing homelessness or working within the homeless community. The magazine's editors are Amanda Haggard and Linda Bailey.