Elliot won two Gold medals competing for Great Britain at the 1985 European Athletics Junior Championships in Cottbus (at that time East Germany). He won the 100m (10.38sec - + 0.6) beating Endre Havas of Hungary with John Regis of Great Britain third. He was part of the winning 4 × 100 m relay team. [3]

At the 1986 Commonwealth Games, competing for Scotland, he was a finalist in the 100 metres and finished 5th. He won a Bronze medal as part of the team that was third in the 4 x 100 metre relay.

He competed for Great Britain in the 1988 Summer Olympics held in Seoul, South Korea in the 4 x 100 metre relay where he won the Silver medal with his teammates John Regis, Mike McFarlane and Linford Christie.

Elliot was coached throughout his career by Bob Inglis. [3]

In 1994, he retired from top-level athletic competition aged 27 years old and played rugby for Scottish fourth division side Livingston RFC. [5] and Heriots RFC. He also made a sevens appearance, playing for a Scottish select side at the Selkirk sevens. [4] 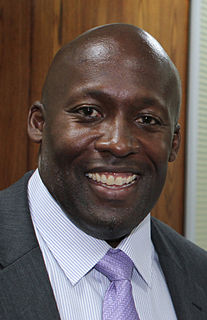 Kim Simmone Geraldine Jacobs is a female retired British athlete who competed in the 100 metres and 200 metres. She represented Great Britain at four Olympic Games (1988–96), winning a bronze medal as a 17-year-old at the 1984 Los Angeles Olympics in the 4 x 100 metres relay. She also won a relay bronze medal at the 1990 European Championships and relay medals at three Commonwealth Games.

Linsey Macdonald is a former Scottish sprinter from Dunfermline, Fife, who specialised in the 400 metres. She was nicknamed "The Fife Flyer" during her career. Inspired by competitors like Mary Peters she started in athletics at the age of 10.

Allan Watt (1922–2014) was a Scottish sprinter who represented Scotland and Great Britain in international competition.