Last updated March 23, 2022
Class of roundworms
Not to be confused with Enopla, a clade of nemertean worms.

Enoplea (enopleans) is a class, which with the classes Secernentea [1] and Chromadorea make up the phylum Nematoda in current taxonomy. [2] [3] [4] The Enoplea are considered to be a more ancestral group than the Chromadorea, and researchers have referred to its members as the "ancestrally diverged nematodes", compared to the "more recently diverged nematodes" of Chromadorea. [5]

The Enoplea are distinguished from the Chromadorea by a number of characteristics. The enoplean esophagus is cylindrical or "bottle-shaped", compared to the bulbous chromadorean esophagus. Enopleans have pocket-like amphids, while chromadoreans have amphids shaped like slits, pores, coils, or spirals. An enoplean is smooth or marked with fine lines, while a chromadorean may have rings, projections, or setae. The enoplean excretory system is simple, sometimes made up of a single cell, while chromadoreans have more complex, tubular systems, sometimes with glands. [6] [7]

Phylogenetic analysis of phylum Nematoda suggests three distinct basal clades, the dorylaims, enoplids and chromadorids. [8] These represent Clades I, II and C+S of Blaxter (1998). [9] Of these, the first two appear to have sister clade status, allowing resolution into two classes, Enoplea and Chromadorea, and division of the former into two subclasses corresponding to Clades I and II respectively, the Enoplia and Dorylaimia.

Several orders of enopleans are mainly freshwater animals, and several include marine species. [11] 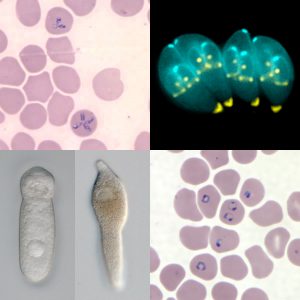 The Apicomplexa are a large phylum of parasitic alveolates. Most of them possess a unique form of organelle that comprises a type of non-photosynthetic plastid called an apicoplast, and an apical complex structure. The organelle is an adaptation that the apicomplexan applies in penetration of a host cell. 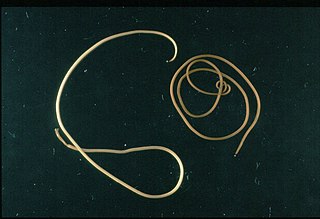 Nematomorpha are a phylum of parasitoid animals superficially similar to nematode worms in morphology, hence the name. Most species range in size from 50 to 100 millimetres long, reaching 2 metres in extreme cases, and 1 to 3 millimetres in diameter. Horsehair worms can be discovered in damp areas, such as watering troughs, swimming pools, streams, puddles, and cisterns. The adult worms are free-living, but the larvae are parasitic on arthropods, such as beetles, cockroaches, mantids, orthopterans, and crustaceans. About 351 freshwater species are known and a conservative estimate suggests that there may be about 2000 freshwater species worldwide. The name "Gordian" stems from the legendary Gordian knot. This relates to the fact that nematomorphs often coil themselves in tight balls that resemble knots. 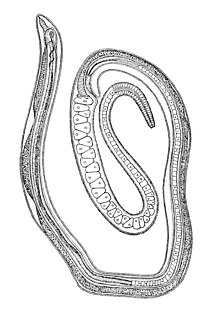 The Trichocephalida is an order of parasitic nematodes.

Secernentea was a class of nematodes in the Classical Phylogeny System and is no longer in use. This morphological-based classification system has been replaced by the Modern Phylogeny system, where taxonomy assignment is based on small subunit ribosomal DNA.

The Chromadorea are a class of the roundworm phylum, Nematoda. They contain a single subclass (Chromadoria) and several orders. With such a redundant arrangement, the Chromadoria are liable to be divided if the orders are found to form several clades, or abandoned if they are found to constitute a single radiation.

Subclass Spiruria comprises mostly parasitic secernentean nematodes. In an alternate classification, they are treated as suborder Spirurina, with the orders listed here being ranked as infraorders. 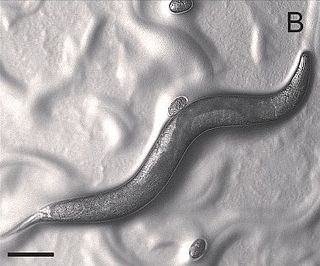 Diplogasterida was an order of nematodes. It was sometimes placed in a monotypic subclass Diplogasteria, but molecular phylogenetic evidence has shown it to be embedded in the family Rhabditidae. The confusion of having a hierarchical nesting of groups that were formerly mutually exclusive has led to a profusion of names. Although completely revised taxonomy of nematodes that builds on recent classification systems as well as recent phylogenetic evidence is still necessary, most contemporary taxonomic studies now treat all groups listed under "Diplogasterina" below as a single family, Diplogastridae. 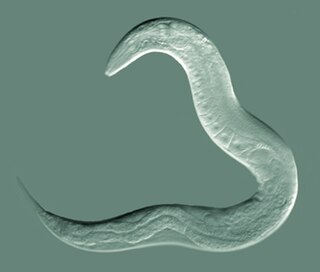 The nematodes or roundworms constitute the phylum Nematoda, with plant-parasitic nematodes also known as eelworms. They are a diverse animal phylum inhabiting a broad range of environments. Taxonomically, they are classified along with insects and other moulting animals in the clade Ecdysozoa, and unlike flatworms, have tubular digestive systems with openings at both ends. Like tardigrades, they have a reduced number of Hox genes, but their sister phylum Nematomorpha has kept the ancestral protostome Hox genotype, which shows that the reduction has occurred within the nematode phylum.

Dorylaimia is a subclass of nematodes.

Anguillicoloides papernai is a parasitic nematode worm that lives in the swimbladders of eels, particularly Anguilla mossambica. Specimens have been located in Cape Province, South Africa. It is named after Dr. Ilan Paperna. What differentiates this species from its congeners is the presence of marked cuticular excrescences on the anterior and posterior ends of the body and the location of the buccal capsule deeply inside the head end. This species was the first Anguillicola member described from Africa. 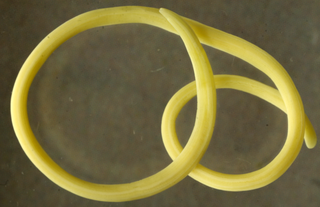 The Enoplia are a subclass of nematodes in the class Enoplea.

Longidoridae is a family of polyphagous root ectoparasites in the phylum Nematoda (nematodes) with a worldwide distribution.

Ingenia is a genus of marine nematode worms natve to Brazil, with a single known species, I. mirabilis. It belongs to the Tripyloididae, which is a group that are mostly free-living and which feed on diatoms and other algaes.

Paratrichodorus is a genus of terrestrial root feeding (stubby-root) nematodes in the Trichodoridae family (trichorids), being one of five genera. They are economically important plant parasites and virus vectors. The females are didelphic, and are distributed worldwide.

Triplonchida is an order of terrestrial nematodes, and is one of two orders making up the subclass Enoplia.

Diphtherophorina is a suborder of terrestrial nematodes, being one of three that constitute suborder Triplonchida.

Trichodoridae is a family of terrestrial root feeding nematodes, being one of two that constitute suborder Triplonchida. They are economically important plant parasites and virus vectors. 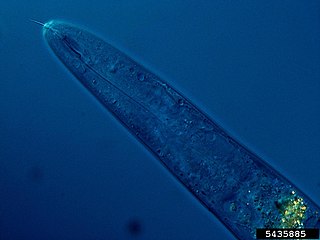 Trichodorus is a genus of terrestrial root feeding (stubby-root) nematodes in the Trichodoridae family (trichorids), being one of five genera. They are economically important plant parasites and virus vectors.

Mononchoides fortidens, of the order Diplogasterida, is a free-living predacious nematode that feeds on both nematodes and bacteria . The predatory behavior of this nematode presents the opportunity to use it as a bio-control agent against other plant parasitic nematodes. It has been shown to have a preference for the second stage juveniles of Meloidogyne incognita.