San Francisco Zapotitlán is a town, with a population of 18,468, and a municipality in the Suchitepéquez department of Guatemala.

Ueda Glacier is a large glacier flowing eastward along the south side of the Scaife Mountains to enter Hansen Inlet near the base of Antarctic Peninsula. It was mapped by United States Geological Survey (USGS) from surveys and U.S. Navy air photos from 1961–67 and named by Advisory Committee on Antarctic Names (US-ACAN) for Herbert T. Ueda who, with B. Lyle Hansen, was in charge of the deep core drilling program at Byrd Station, summers 1966-67 and 1967–68.

Sillard Islands is a group of small ice-covered islands lying close to Cape Mascart, the northeast extremity of Adelaide Island. Discovered by the French Antarctic Expedition, 1908–10, under Charcot, and named for Director Sillard of the French Montevideo Co., Montevideo, Uruguay, whose company made repairs on Charcot's ship, the Pourquoi Pas ?. 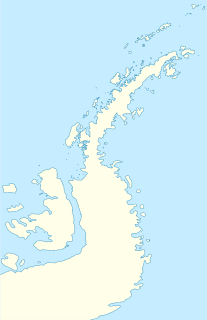 Armstrong Glacier is a glacier flowing from the south side of Mount Bagshawe westward into George VI Sound. It provides the only known safe route for mechanical vehicles from George VI Sound to the Palmer Land plateau. It was named by the United Kingdom Antarctic Place-Names Committee for Edward B. Armstrong, British Antarctic Survey surveyor at Stonington Island, 1964–65.

Nye Glacier is a glacier on Arrowsmith Peninsula flowing southwest to Whistling Bay, in Graham Land. Mapped by Falkland Islands Dependencies Survey (FIDS) from surveys and air photos, 1948–59. It was named by the United Kingdom Antarctic Place-Names Committee (UK-APC) for John F. Nye, an English physicist who has made theoretical contributions to the study of the flow of glaciers and ice sheets.

Ward Islands is a group of two small islands and off-lying rocks forming the southern part of the Amiot Islands, off the southwest part of Adelaide Island. Named by the United Kingdom Antarctic Place-Names Committee (UK-APC) for Herbert G.V. Ward, Chief Engineer of RRS John Biscoe, 1948–1962, which ship assisted the Royal Navy Hydrographic Survey Unit which charted this group in 1963.

Cumbers Reef is a group of rocks aligned in an arc forming the north and west parts of the Amiot Islands, off the southwest part of Adelaide Island. It was named by the UK Antarctic Place-Names Committee for Roger N. Cumbers, 3rd officer of RRS John Biscoe, 1961–62, the ship which assisted the Royal Navy Hydrographic Survey Unit in the charting of this area in 1963.

Demorest Glacier is a glacier on the northeast side of Hemimont Plateau which flows southeast into Whirlwind Inlet between Flint Glacier and Matthes Glacier, on the east coast of Graham Land. It was discovered by Sir Hubert Wilkins on a flight of December 20, 1928, and photographed from the air by the United States Antarctic Service in 1940. It was charted by the Falkland Islands Dependencies Survey in 1947 and named for Max H. Demorest, an American glaciologist.

Stork Ridge is an ENE-WSW ridge, 1 nautical mile (1.9 km) long and rising to about 420 m, located 3.5 nautical miles (6 km) northwest of Rothera Point, southeast Adelaide Island. The naming of the ridge follows a hydrographic survey conducted from HMS marked with a staff and flag, giving the appearance of a stork on the ridge.

The Lister Heights are rock heights on the east side of Stratton Glacier, 4 nautical miles (7 km) southwest of Flat Top in the western part of the Shackleton Range, Antarctica. They were first mapped in 1957 by the Commonwealth Trans-Antarctic Expedition (CTAE) and named for Hal Lister, a glaciologist with the transpolar party of the CTAE in 1956–58, and leader at the expedition's advance base, South Ice, in 1957.

Melville Point is a point marking the east side of the entrance to Siniff Bay on the coast of Marie Byrd Land, Antarctica. It was mapped by United States Geological Survey from surveys and U.S. Navy air photos, 1959–65, and was named by the Advisory Committee on Antarctic Names for Captain Frederick C. Melville, master of the barquentine City of New York in voyages to the Bay of Whales during the Byrd Antarctic Expedition, 1928–30.

Sepúlveda Point is the south entrance point of Recess Cove, in Charlotte Bay on the Danco Coast. The feature was named "Punta Sepúlveda" by the Chilean Antarctic Expedition of 1952, after Teniente (Lt.) Hernan Sepúlveda Gore, of the patrol ship Lientur which worked in the area.

Renaud Glacier is a heavily crevassed glacier on the east side of Hemimont Plateau flowing southeast to enter Seligman Inlet between Lewis Glacier and Choyce Point, on the east coast of Graham Land. The glacier was first photographed by the United States Antarctic Service (USAS), 1939–41. Named by United Kingdom Antarctic Place-Names Committee (UK-APC) for Andre Renaud, Swiss glaciologist and chairman of the Swiss Glacier Commission, 1955–74.

German submarine U-930 was a Type VIIC/41 U-boat of Nazi Germany's Kriegsmarine during World War II.