Huachacalla is a small town in the Litoral Province of the Oruro Department in Bolivia. It is the seat of the Huachacalla Municipality. 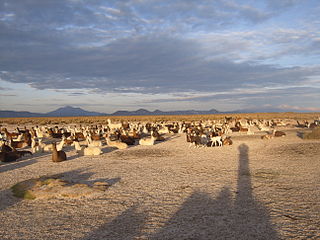 Litoral is a province in the southwestern parts of the Bolivian Oruro Department. Its seat is Huachacalla.

Hansen Mountains is a large group of nunataks rising to about 300 m (980 ft) above the Antarctic plateau. The mountains are approximately 89 km (55 mi) south of Stefansson Bay and they extend 40 km (25 mi) from northwest to southeast in Kemp Land, East Antarctica. The Hansen Mountains were first mapped by Norwegian cartographers from air photos taken by the 1936–1937 Lars Christensen Expedition. They were named for H.E. Hansen, the Norwegian cartographer who compiled the maps for this and other Norwegian Antarctic expeditions.

Albillos is a municipality and town in the province of Burgos, Spain, located about 10 kilometers from the province's capital, Burgos.

Utopia Glacier is a glacier in Antarctica encircled by Mariner Hill, Syrtis Hill, Natal Ridge, and Ares Cliff; the feature was named for Utopia Planitia on the planet Mars, which was the landing site of the NASA Viking 2 Lander Mission on 3 September 1976. This name was applied to the feature by members of the Mars Oasis Party who were searching for life on the glacier, much in the same manner as the satellite was on the planet Mars.

Putao District is the northernmost of district of Myanmar and part of the Kachin State in northern Burma bordering China. The capital lies at Putao.

Adelaide Anchorage is an area of safe anchorage lying west of Avian Island, off the south end of Adelaide Island. It is the anchorage normally used by ships visiting Adelaide research station. Charted by members of the RRS John Biscoe and the Royal Navy Hydrographic Survey Unit in January–March 1962.

Bugzy Płoskie is a village in the administrative district of Gmina Chorzele, within Przasnysz County, Masovian Voivodeship, in east-central Poland. It lies approximately 8 kilometres (5 mi) west of Chorzele, 29 km (18 mi) north of Przasnysz, and 118 km (73 mi) north of Warsaw.

San Andrés Tenejapan is a municipality located in the montane central zone of the State of Veracruz, about 85 km from state capital Xalapa. It has a surface of 24.68 km2. It is located at 18°47′N97°06′W.

The Wag Water River is one of Jamaica's rivers. It is dammed by the Hermitage Dam.

Cornwall Glacier is a glacier 9 nautical miles (17 km) long, flowing south from Crossover Pass in the Shackleton Range to join Recovery Glacier east of Ram Bow Bluff. It was first mapped in 1957 by the Commonwealth Trans-Antarctic Expedition, and named for General Sir James Handyside Marshall-Cornwall, a member of the Committee of Management of the Commonwealth Trans-Antarctic Expedition, 1955–58.

Crosse Passage is a small passage leading southeast from Adelaide Anchorage between the Henkes Islands and the Skeen Rocks, off the south end of Adelaide Island. It was named by the UK Antarctic Place-Names Committee in 1963 for Lieutenant Commander Anthony G. Crosse, Royal Navy, First Lieutenant of HMS Protector which was used by the Hydrographic Survey Unit in charting this area in 1961–63.

Planet Heights is a series of summits running along an ice-free ridge, extending 24 nautical miles (44 km) in a north-south direction between the southernmost extremity of the LeMay Range and George VI Sound in the east part of Alexander Island, Antarctica. Many landforms and nearby features are named in association with this mountain range; some of these include landforms named after astronomers, satellites, planets and other things related to astrology and astrophysics. The mountain range was first mapped from air photos taken by the Ronne Antarctic Research Expedition (RARE), 1947–48, by Searle of the Falkland Islands Dependencies Survey (FIDS) in 1960. Named by the United Kingdom Antarctic Place-Names Committee (UK-APC) from association with the nearby glaciers named for planets of the solar system. The only planet that is not featured in any of these glaciers is the planet Earth, as there are no glaciers named "Earth Glacier" and this glacier does not exist.

Erratic Valley is a short valley on Alexander Island, Antarctica, that joins Ablation Valley from the north. It was named from the large number of erratic igneous blocks observed in the valley by a University of Aberdeen field party which mapped the area in 1978–79. The site lies within Antarctic Specially Protected Area (ASPA) No.147.

Gateway Pass is a mountain pass about 5 nautical miles (9 km) long lying between the mountain Astarte Horn and Offset Ridge in eastern Alexander Island, Antarctica. It was mapped by the Directorate of Overseas Surveys from satellite imagery supplied by the U.S. National Aeronautics and Space Administration in cooperation with the U.S. Geological Survey, and was so named by the UK Antarctic Place-Names Committee because the feature serves as a "gateway" giving access to the interior of Alexander Island from the head of Venus Glacier.

Skeen Rocks is a two rocks lying south of Avian Island, off the south end of Adelaide Island. Named by the United Kingdom Antarctic Place-Names Committee (UK-APC) for Lieutenant Michael G.C. Skeen, Royal Navy, officer in charge of the helicopter flight, HMS charting this area in 1961–63.

Thomsen Islands is a group of small islands lying 2 nautical miles (3.7 km) southwest of Speerschneider Point, off the west side of Renaud Island in the Biscoe Islands. First accurately shown on an Argentine government chart of 1957. Named by the United Kingdom Antarctic Place-Names Committee (UK-APC) in 1959 for Helge Thomsen, Danish meteorologist, who, for a number of years beginning in 1946, was responsible for editing Dansk Meteorologisk Institut's annual reports on the state of the sea ice in the Arctic.

Rocca Islands is a group of small islands and rocks 3 nautical miles (6 km) east of Avian Island, off the south end of Adelaide Island. Discovered in 1909 by the French Antarctic Expedition and named by Charcot for Monsieur Rocca, an acquaintance in Punta Arenas. Remapped by the British Royal Navy Hydrographic Survey Unit in 1963.