Mendlesohn was born in Manchester. She joined Staffordshire University in November 2016 as Prof & Assistant Dean, Law, Policing, Forensics & Sociology. [2] She was previously employed as Professor and Head of Department in the Department of English, Communication, Film and Media at Anglia Ruskin University. [3] Prior to that she was Reader in Science Fiction and Fantasy Literature in the Media Department at Middlesex University. She writes on the history of American religions and British and American science fiction and fantasy. She received her D. Phil. in History from the University of York in 1997. [4] She was the editor of Foundation - The International Review of Science Fiction from 2002 to 2007. She used to be reviews editor of Quaker Studies.

Her book Rhetorics of Fantasy won the BSFA award for best non-fiction book in 2009; the book was also nominated for Hugo and World Fantasy Awards.

In 2010 she was nominated twice for the Best Related Work Hugo, for The Inter-Galactic Playground: A Critical Study of Children's and Teens' Science Fiction, and for On Joanna Russ .

In 2017, she was nominated for a World Fantasy Special Award—Professional for Children's Fantasy Literature: An Introduction.

In 2020 her biography of Robert Heinlein (see below) was nominated for the Best Related Work Hugo.

She is an active volunteer member of the administration for science fiction conventions. Among other events, she co-chaired ConCussion, the 2006 Eastercon, with Simon Bradshaw; [5] and was director of program for Anticipation and the Montreal World Science Fiction Convention in 2009; [6] She was on the convention committee of Loncon 3, the 72nd World Science Fiction Convention, until she resigned over the declaration that Jonathan Ross would be master of ceremonies for the presentation of the Hugo Awards; she remained division head for the convention's exhibits hall. [7]

In 2017, Mendlesohn announced that her forthcoming critical study of Robert Heinlein would be published by the crowdfunding publisher Unbound, [8] and that if the funding exceeded the target any surplus would be divided between America's Blood Centers and Con or Bust (a non-profit corporation which helps people of color to attend Science Fiction and Fantasy Conventions). [9] As of October 2017 [update] the pledges had exceeded the target by 18%. The book was published in 2019, under the title The Pleasant Profession of Robert A. Heinlein.

Joanna Russ was an American writer, academic and radical feminist. She is the author of a number of works of science fiction, fantasy and feminist literary criticism such as How to Suppress Women's Writing, as well as a contemporary novel, On Strike Against God, and one children's book, Kittatinny. She is best known for The Female Man, a novel combining utopian fiction and satire, and the story "When It Changed". 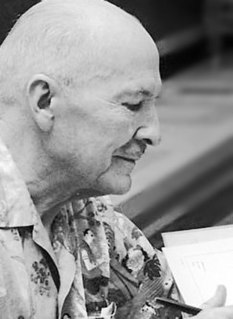 Robert Anson Heinlein was an American science fiction author, aeronautical engineer, and naval officer. Sometimes called the "dean of science fiction writers", he was among the first to emphasize scientific accuracy in his fiction, and was thus a pioneer of the subgenre of hard science fiction. His published works, both fiction and non-fiction, express admiration for competence and emphasize the value of critical thinking. His plots often posed provocative situations which challenged conventional social mores. His work continues to have an influence on the science-fiction genre, and on modern culture more generally. 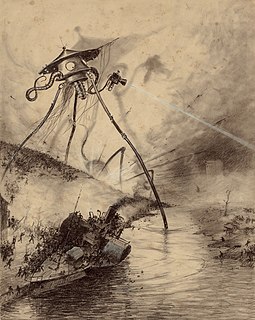 Zenna Chlarson Henderson was an American elementary school teacher and science fiction and fantasy author. Her first story was published in The Magazine of Fantasy & Science Fiction in 1951. Her work is cited as pre-feminist, often featuring middle-aged women, children, and their relationships, but with stereotyped gender roles. Many of her stories center around humanoid aliens called "The People", who have special powers. Henderson was nominated for a Hugo Award in 1959 for her novelette "Captivity". Science fiction authors Lois McMaster Bujold, Orson Scott Card, Connie Willis, Kathy Tyers, and Dale Bailey have cited her as an influence on their work.

George Edgar Slusser was an American scholar, professor and writer. Slusser was a well-known science fiction critic. A professor emeritus of comparative literature at University of California, Riverside, he was the first curator of the Eaton collection.

Historical fantasy is a category of fantasy and genre of historical fiction that incorporates fantastic elements into a more "realistic" narrative. There is much crossover with other subgenres of fantasy; those classed as Arthurian, Celtic, or Dark Ages could just as easily be placed in historical fantasy. Stories fitting this classification generally take place prior to the 20th century.

The 63rd World Science Fiction Convention (Worldcon) was called Interaction, and was held in Glasgow, Scotland 4–8 August 2005. The event was also the Eurocon. The Venue for the 63rd Worldcon was the Scottish Exhibition and Conference Centre (SECC) with the attached Clyde Auditorium and Moat House Hotel. Parties took place at the Hilton Hotel.

Edward Frederick James is a British scholar of medieval history and science fiction. He is Emeritus Professor of Medieval History at University College, Dublin.

Foundation: The International Review of Science Fiction is a critical peer-reviewed literary magazine established in 1972 that publishes articles and reviews about science fiction. It is published triannually by the Science Fiction Foundation. Worlds Without End called it "the essential critical review of science fiction", whilst The Encyclopedia of Science Fiction has called it "perhaps the liveliest and indeed the most critical of the big three critical journals". A long-running feature was the series of interviews and autobiographical pieces with leading writers, entitled "The Profession of Science Fiction", a selection of which was edited and published by Macmillan Publishers in 1992. Several issues have been themed, including #93, published also as part of the Foundation Studies in Science Fiction. The hundredth edition was unusual in that it was an all-fiction issue, including stories by such writers as Vandana Singh, Tricia Sullivan, Karen Traviss, Jon Courtenay Grimwood, John Kessel, Nalo Hopkinson, Greg Egan, and Una McCormack. Back issues of the journal are archived at the University of Liverpool's SF Hub whilst more recent issues can be found electronically via the database providers ProQuest. 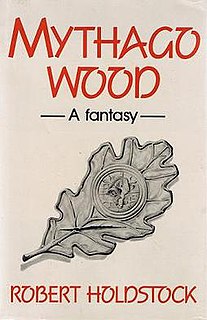 Mythago Wood is a fantasy novel by British writer Robert Holdstock, published in the United Kingdom in 1984. It won the World Fantasy Award for Best Novel in 1985. It served as the first in a series of novels known as the Mythago Wood or Ryhope Wood cycle. It belongs to a type of fantasy literature known as mythic fiction. It has received critical acclaim for the quality of its prose, its forest setting, and its exploration of philosophical, spiritual and psychological themes.

Andrew M. Butler is a British academic who teaches film, media and cultural studies at Canterbury Christ Church University. He is a former editor of Vector, the Critical Journal of the British Science Fiction Association and was membership secretary of the Science Fiction Foundation. He is a former Arthur C. Clarke Award judge and is now a member of the Serendip Foundation which administers the award.

Science fiction studies is the common name for the academic discipline that studies and researches the history, culture, and works of science fiction and, more broadly, speculative fiction. 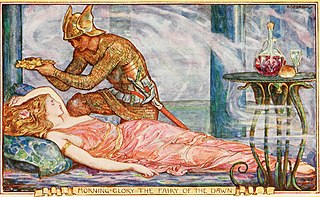 Fantasy is a genre of speculative fiction set in a fictional universe, often inspired by real world myth and folklore. Its roots are in oral traditions, which then became fantasy literature and drama. From the twentieth century it has expanded further into various media, including film, television, graphic novels, manga, animated movies and video games.

Greer Ilene Gilman is an American author of fantasy stories.

BeABohema was a science fiction fanzine edited by Frank Lunney of Quakertown, Pennsylvania. It lasted for twenty issues from 1968 to December 1971, and was nominated for the 1970 Hugo Award for Best Fanzine, losing to Richard E. Geis' Science Fiction Review. 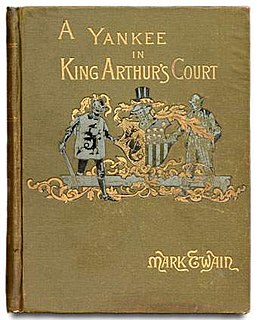 A time slip is a plot device in fantasy and science fiction in which a person, or group of people, seem to travel through time by unknown means.