Marc Gascoigne (born 5 July 1962 at Temple Ewell with River, near Dover, Kent) is a British author and editor.

Gascoigne was the developer or editor of several of GW's classic boardgames in the mid-1980s, including the first two editions of Blood Bowl, and created the background for Dark Future, ported onto the car-based boardgame after the cancellation of an original cyberpunk-themed roleplaying game.

Although he worked on the popular children's series Fighting Fantasy as an editor, he only ever published one gamebook as author, which was called Battleblade Warrior. It was number 31 of 59 in the original series and was released in early 1988. However, he also wrote two related novels, and five books under the Advanced Fighting Fantasy banner, including Titan , an encyclopedia of the fictional world in which most of the gamebooks are set.

After ten years as a freelance editor, including time on Puffin's Fighting Fantasy gamebook series, he returned to Games Workshop in 1997 to help establish the Black Library fiction imprint. Starting as editor he became publisher and overall manager of the BL Publishing family of imprints, that during a time also included Black Industries and Solaris Books.

Under Gascoigne, with Warhammer experts Rick Priestley and Andy Jones, the idea for the Black Library slowly evolved and produced the magazine Inferno! as a result beginning in July 1997. [2] Gascoigne was the general manager of Games Workshop's BL Publishing division, making books, board games, and RPGs. [1]

He left this post at the end of March 2008 when Games Workshop downsized its staff. It was announced on 11th Sept 2008 that he had joined HarperCollins to create a new science fiction & fantasy imprint to be called Angry Robot. [3]

In 2019 Gascoigne was hired to launch a new imprint, Aconyte Books, for Asmodee Entertainment Ltd. [7] 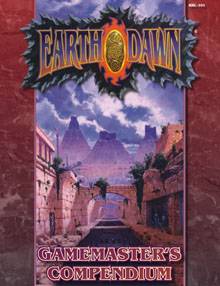 Earthdawn is a fantasy role-playing game, originally produced by FASA in 1993. In 1999 it was licensed to Living Room Games, which produced the Second Edition. It was licensed to RedBrick in 2003, who released the Classic Edition in 2005 and the game's Third Edition in 2009. The license is now held by FASA Games, Inc., who have released the Fourth Edition, with updated mechanics and an advanced metaplot timeline. 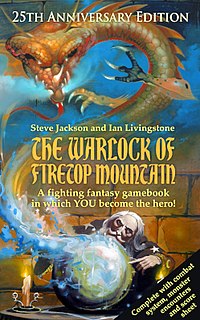 Fighting Fantasy is a series of single-player role-playing gamebooks created by Steve Jackson and Ian Livingstone. The first volume in the series was published in paperback by Puffin in 1982.

Games Workshop Group is a British manufacturer of miniature wargames, based in Nottingham, England. Its best-known products are Warhammer Age of Sigmar and Warhammer 40,000. It is listed on the London Stock Exchange and is a constituent of the FTSE 250 Index.

Titan: The Fighting Fantasy World is a book in the Fighting Fantasy series of children's fantasy books, first published by Puffin Books in 1986. Although credited to Steve Jackson and Ian Livingstone, it was actually written by Marc Gascoigne, although mostly based on locations, characters and events already described in other books in the series. It is written in the manner of an encyclopedia about the fantasy world of Titan, in which the majority of Fighting Fantasy gamebooks are set. 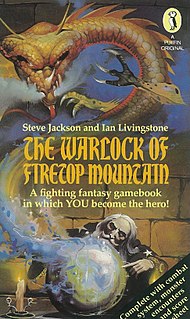 The Warlock of Firetop Mountain is a single-player adventure gamebook written by Steve Jackson and Ian Livingstone, and illustrated by Russ Nicholson. Originally published by Puffin Books in 1982, the title is the first gamebook in the Fighting Fantasy series. It was later republished by Wizard Books in 2002, and Scholastic Books in 2017. As well as launching the Fighting Fantasy series, the gamebook inspired two direct sequels and five novels, and has been adapted into a board game, an audio drama and a video game.

Robert N. Charrette is an American graphic artist, game designer, sculptor and author. Charrette has authored more than a dozen novels. His gaming materials have received many Origins Awards. Charrette was inducted in the Origins Hall of Fame in 2003. His work is known for a clean, realistic style that invokes themes from Feudal Japan and Chanbara films and in particular, historical and fantastic representations of Samurai culture. His early work in game design and miniature sculpting set the tone for depictions of Japanese mythology in American fantasy and science fiction. His 1979 role-playing game Bushido was one of the first role-playing games with a non-Western theme and remained in print for more than three decades. Charrette produced gaming products for Fantasy Games Unlimited, Grenadier Models Inc. and Ral Partha Enterprises, FASA and currently operates Parroom Enterprises, LLC, a boutique miniatures game company.

Nigel D. Findley was a Canadian game designer, editor, and an author of science fiction and fantasy novels and role-playing games (RPGs).

Return to Firetop Mountain is a single-player roleplaying gamebook written by Ian Livingstone and illustrated by Martin McKenna. It was originally published in 1992 by Puffin Books and was later republished by Wizard Books in 2003. The gamebook forms part of Steve Jackson and Ian Livingstone's Fighting Fantasy series, where it is the 50th volume in the original Puffin series (ISBN 0-14-036008-5) and the 16th in the later Wizard series (ISBN 1-84046-481-X). 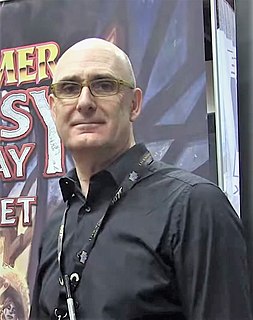 Graeme Davis is a game designer, writer and editor. Davis has worked extensively in the roleplaying game industry.

Group SNE is a Japanese company founded in 1986 by the current president Hitoshi Yasuda, which produces role-playing games, light novels, board games and card games. Ryo Mizuno was one of the founding members. Group SNE is named after Syntax Error, the programming language BASIC's term. The most famous product of Group SNE is Record of Lodoss War well known for a fantasy anime adaptation. Moreover, there are several anime adaptations based upon Group SNE's products such as Legend of Crystania, Mon Colle Knights and Rune Soldier.

Christopher Kubasik, also known as Chris Kubasik, is an American author of several role-playing games, sourcebooks, adventures and fiction novels set in them, and has created his own TV series.

Ian Miller is a British fantasy illustrator and writer best known for his quirkily etched gothic style and macabre sensibility, and noted for his book and magazine cover and interior illustrations, including covers for books by H. P. Lovecraft and contributions to David Day's Tolkien-inspired compendiums, work for Fighting Fantasy gamebooks and various role-playing and wargaming publications, as well as contributions to the Ralph Bakshi films Wizards and Cool World.

Jonathan Green is a freelance writer. He has written for various science fiction and fantasy franchises, including Doctor Who, Fighting Fantasy, Sonic the Hedgehog, and Games Workshop's Warhammer and Warhammer 40,000 game universes.

Jim Bambra is a British designer and reviewer of fantasy roleplaying games (RPG), and a former company director. He is particularly known for his contributions to Dungeons and Dragons, Fighting Fantasy, Warhammer, and Star Wars: The Roleplaying Game which was based on the Star Wars films. Later he became head of design at MicroProse, then managing director of Pivotal Games, a publisher of video games including Conflict: Desert Storm.

Judge Dredd: The Role-Playing Game is a role-playing game published by Games Workshop in 1985.

Denizens of Earthdawn Volume One is a supplement published by FASA in 1994 for the fantasy role-playing game Earthdawn.

Seattle Sourcebook is a supplement published by FASA in 1990 for the near-future dystopian role-playing game Shadowrun.