Terri Windling (born 3 December 1958 in Fort Dix, New Jersey) is an American editor, artist, essayist, and the author of books for both children and adults. She has won nine World Fantasy Awards, the Mythopoeic Fantasy Award, and the Bram Stoker Award, and her collection The Armless Maiden appeared on the short-list for the James Tiptree, Jr. Award. In 2010 Windling received the SFWA Solstice Award, which honors "individuals with a significant impact on the speculative fiction field". Her work has been translated into French, German, Spanish, Italian, Czech, Lithuanian, Turkish, Russian, Japanese, and Korean.

In the American publishing field, Windling has been one of the primary creative forces behind the mythic fiction resurgence that began in the early 1980s, through her work as an innovative editor for the Ace and Tor Books fantasy lines and as the editor of more than thirty anthologies of magical fiction. She created the Fairy Tale Series [1] of novels that reinterpret classic fairy tales (below). She is also recognized as one of the founders of urban fantasy, having published and promoted the first novels of Charles de Lint, Emma Bull, and other pioneers of the genre. [2] [3]

With Ellen Datlow, Windling edited 16 volumes of Year's Best Fantasy and Horror (1986–2003), an anthology that reached beyond the boundaries of genre fantasy to incorporate magic realism, surrealism, poetry, and other forms of magical literature. Datlow and Windling also edited the Snow White, Blood Red series of literary fairy tales for adult readers, as well as many anthologies of myth & fairy tale inspired fiction for younger readers, such as The Green Man , The Faery Reel, and The Wolf at the Door. Windling also created and edited the Borderland series for teenage readers, and The Armless Maiden, a fiction collection for adult survivors of child abuse like herself. [4] [5]

As an author, Windling's fiction includes The Wood Wife (winner of the Mythopoeic Award for Novel of the Year) and several children's books: The Raven Queen, The Changeling, A Midsummer Night's Faery Tale, The Winter Child, and The Faeries of Spring Cottage. Her essays on myth, folklore, magical literature and art have been widely published in newsstand magazines, academic journals, art books, and anthologies. She was a contributor to The Oxford Companion to Fairy Tales, edited by Jack Zipes.

As an artist, Windling specializes in work inspired by myth, folklore, and fairy tales. Her art has been exhibited across the US, as well as in the UK and France.

Windling is the founder of the Endicott Studio, an organization dedicated to myth-inspired arts, and was the co-editor with Midori Snyder of The Journal of Mythic Arts from 1987 until it ceased publication in 2008. [6] She also sits on the board of the Mythic Imagination Institute. Windling married Howard Gayton, the British dramatist and co-founder of the influential Commedia dell'arte troupe, the Ophaboom Theatre Company, in September 2008, and lives in Devon, England. [7]

In May 2016, Windling gave the fourth annual Tolkien Lecture at Pembroke College, Oxford, speaking on the topic of fantasy literature in the post-Tolkien era. [8]

The latter Young Adult shared-world series features the intersection of Elfland and human lands, which is generally populated by teenagers, runaways, and exiles. Primary series writers are Ellen Kushner, Charles de Lint, Midori Snyder, Emma Bull, and Will Shetterly. The series consists of five anthologies and three novels to date.[ when? ]

Brian Froud is an English fantasy illustrator. He is most widely known for his 1978 book Faeries with Alan Lee, and as the conceptual designer of the Jim Henson films The Dark Crystal and Labyrinth. According to Wired, Froud is "one of the most pre-emiminent visualizers of the world of faerie and folktale". 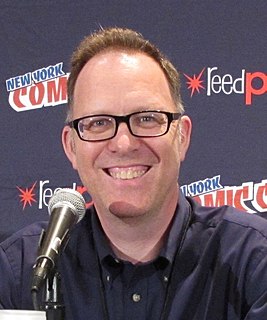 Garth Richard Nix is an Australian writer who specialises in children's and young adult fantasy novels, notably the Old Kingdom, Seventh Tower and Keys to the Kingdom series. He has frequently been asked if his name is a pseudonym, to which he has responded, "I guess people ask me because it sounds like the perfect name for a writer of fantasy. However, it is my real name."

Emma Bull is an American science fiction and fantasy author. Her novels include the Hugo- and Nebula-nominated Bone Dance and the urban fantasy War for the Oaks. She is also known for a series of anthologies set in Liavek, a shared universe that she created with her husband, Will Shetterly. As a singer, songwriter, and guitarist, she has been a member of the Minneapolis-based folk/rock bands Cats Laughing and The Flash Girls. 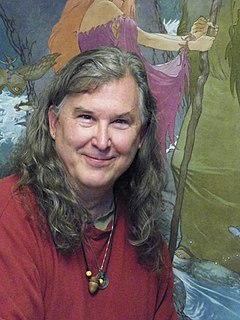 Charles Vess is an American fantasy artist and comics artist who has specialized in the illustration of myths and fairy tales. His influences include British "Golden Age" book illustrator Arthur Rackham, Czech Art Nouveau painter Alphonse Mucha, and comic-strip artist Hal Foster, among others. Vess has won several awards for his illustrations. Vess' studio, Green Man Press, is located in Abingdon, VA. 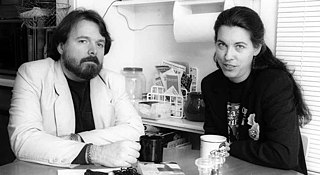 Caroline Stevermer is an American writer of young adult fantasy novels and shorter works. She is best known for historical fantasy novels.

Holly BlacknéeRiggenbach is an American writer and editor best known for her Children's and Young Adult Fiction. Her most recent work is the New York Times Bestselling Young Adult the Folk of the Air series. She is also well known for The Spiderwick Chronicles, a series of children's fantasy books she created with writer and illustrator Tony DiTerlizzi, and her debut trilogy of Young Adult novels officially called the Modern Faerie Tales.

Midori Snyder is an American writer of fantasy, mythic fiction, and nonfiction on myth and folklore. She has published eight novels for children and adults, winning the Mythopoeic Award for The Innamorati. Her work has been translated into French, Dutch, Italian and Turkish.

Thomas Canty is an illustrator and book designer in the field of fantasy literature.

Wendy Froud is an American doll-artist, sculptor, puppet-maker and writer. She is best known for her work fabricating Yoda for the 1980 film Star Wars: The Empire Strikes Back, for which she has been referred to as "the mother of Yoda", and creatures for the Jim Henson films The Dark Crystal and Labyrinth.

The Wood Wife is a novel by American writer Terri Windling, published by Tor Books in 1996. It won the Mythopoeic Award for Novel of the Year. It is Windling's first novel; she is better known as a longtime editor of fantasy and speculative fiction. Set in the mountain outskirts of contemporary Tucson, Arizona, the novel could equally be described as magical realism, contemporary fantasy, or mythic fiction. Windling draws on myth, folklore, poetry, and the history of surrealist art to tell the story of a woman who finds her muse in a spirited desert landscape. The plot revolves around a reclusive English poet, Davis Cooper, and his lover, Mexican surrealist painter Anna Naverra—a character reminiscent of the real-life Mexican painter Remedios Varo.

Endicott Studio was a nonprofit organization, based in the United States and United Kingdom, that is dedicated to literary, visual, and performance arts inspired by myth, folklore, fairy tales, and the oral storytelling tradition. It was founded in 1987 by Terri Windling, and is co-directed by Windling and Midori Snyder. In 2008, Windling and Snyder won the World Fantasy Award for the Endicott Studio's website and web magazine, The Journal of Mythic Arts.

Snow White, Blood Red is the first book in a series of collections of re-told fairy tales edited by Ellen Datlow and Terri Windling.

Silver Birch, Blood Moon is an anthology of fantasy stories edited by Terri Windling and Ellen Datlow. It is one of a series of anthologies edited by the pair centered on re-told fairy tales. It was published by Avon Books in May 1999. The anthology contains, among several other stories, the Pat York short story "You Wandered Off Like a Foolish Child To Break Your Heart and Mine", which was original to the anthology and was nominated for a Nebula Award for Best Short Story. The anthology itself won the 2000 World Fantasy Award for Best Anthology. 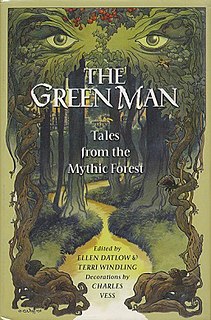 The Green Man: Tales from the Mythic Forest is an anthology of fantasy stories edited by Ellen Datlow and Terri Windling. It was published by Viking Books in May 2002. The anthology itself won the 2003 World Fantasy Award for Best Anthology.

Veronica Schanoes is an American author of fantasy stories and an associate professor in the department of English at Queens College, CUNY. Her fiction has appeared on Tor.com as well as in various anthologies. Her novella Burning Girls was nominated for the Nebula Award and the World Fantasy Award and won the Shirley Jackson Award for Best Novella in 2013. She lives in New York City.