The Federal Football League was an Australian rules football competition in the south-eastern suburbs of Melbourne, Victoria, that was in existence from 1909 to 1981. It was regarded as one of the strongest metropolitan leagues in Melbourne and in the 1960s [1] and it is said that Channel Seven were seeking to telecast league games on a Sunday. [2]

Formed in 1909 [3] as the Federal Football Association, [4] the competition's eight founding members were Cheltenham, Ellindale, Elsternwick, Frankston, Mentone, Mordialloc, Moorabbin, and Glen Huntly, [5] all from the southern/south eastern suburbs. [6]

In 1915, the Federal football Association (FFA) A. Grade teams were - Brighton District, Moorabbin, Cheltenham, Moorabbin Park, Oakleigh and Elsternwick, whilst the B. Grade clubs were Sandringham, Mentone, Heatherton and Glenhuntly. [8]

In 1937 the A Section competition teams where composed of - Black Rock, Mordialloc, Cheltenham, East Burwood, Moorabbin, Caulfield, Darling and Mentone, and in the B section, Chelsea, Highett, Mt. Waverley, Mordialloc, Black Rock and Edithvale-Aspendale. [11]

A. Grade Football Premiers / Runners Up

The Agar Wynne Shield. The Honourable Agar Wynne, MHR was the Federal Football Association's Patron from 1909 to 1915. [22]

The City of Bayside is a local government area in Victoria, Australia. It is within the southern suburbs of Melbourne. It has an area of 36 square kilometres and in 2018 had a population of 105,718 people.

Carrum is a suburb in Melbourne, Victoria, Australia, 33 km (21 mi) south-east from Melbourne's central business district. Its local government area is the City of Kingston. At the 2016 census, Carrum had a population of 3,980. 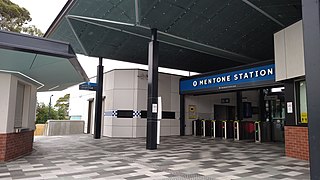 Mentone Station is a railway station on the Frankston line in Victoria, Australia. It serves the south-eastern Melbourne suburb of Mentone, and opened on 19 December 1881 as Balcombe Road. It was renamed Balcombe on 1 September 1882, and took its present name on 7 January 1884. It is classed as a Premium station and it is listed on the Victorian Heritage Register.

Nepean Highway runs south from the corner of Swanston Street and Flinders Street in Victoria, Australia to Portsea, close to the eastern shore of Port Phillip. It is the primary road route to central Melbourne from Melbourne's southern suburbs.

The Frankston railway line is a 42.7 km commuter rail passenger train service in Melbourne, Victoria. It operates between Flinders Street in the Melbourne central business district and Frankston through the south-eastern suburbs including Richmond, South Yarra, Armadale, Malvern, Caulfield East, Glen Huntly, Ormond, McKinnon, Bentleigh, Moorabbin, Cheltenham, Mentone, Parkdale, Mordialloc, Aspendale, Edithvale, Chelsea, Bonbeach, Carrum, Seaford, and Frankston. The line continues on to Stony Point as the non-electrified Stony Point line from Frankston, however, there are no through services between Stony Point and the city. It is operated by Metro Trains Melbourne and is part of the Public Transport Victoria metropolitan rail network. Between Caulfield and the city, the Frankston line acts as a de facto local service whilst Pakenham/Cranbourne line trains run express. 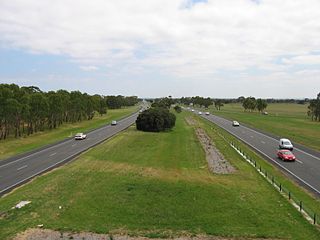 The Mornington Peninsula Nepean Football League is an Australian rules football competition, governed by the AFL South East. The MPNFL contains teams near the south eastern region of Melbourne, Victoria, Australia. At the end of the 2017 season, the competition was restructured from a geographical to a divisional structure, with promotion/ relegation. It contains two divisions with 22 teams in all, 10 in Division 1 and 12 in Division 2.

Brighton Football Club was an Australian rules football club which played in the Victorian Football Association (VFA). The club was based in the Melbourne suburb of Brighton, and was nicknamed the Penguins. After suffering financial hardship throughout the 1950s, Brighton moved to Caulfield and later became the Caulfield Bears in the early to mid-1960s. 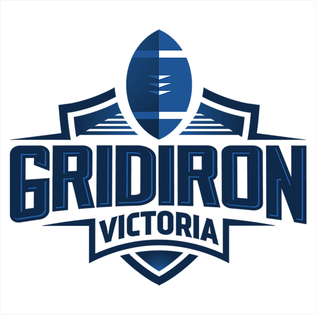 Gridiron Victoria is the governing body for American Football in the State of Victoria, Australia. 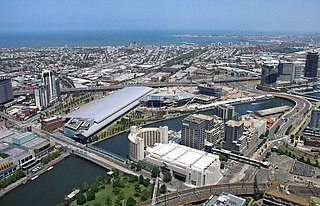 Port Phillip, sometimes referred to as Port Phillip Bay, is a large bay in southern Victoria, Australia, 1,930 km² in area, with a coastline length of 264 km (164 mi). The bay is extremely shallow for its size, but mostly navigable. The deepest portion is only 24 m, and half the region is shallower than 8 m. Its volume is around 25 km³. The city of Melbourne is located at its northern end, near the mouth of the Yarra River.

Moorabbin Football Club, nicknamed the Kangaroos, was the name of two distinct Australian rules football clubs which played in the Victorian Football Association (VFA). The first club, founded in the early 20th century, joined the VFA in 1951 and played there until 1963 with great success; they played home matches at Moorabbin Oval and wore royal blue and white hooped jerseys. The second club played in the VFA from 1983 to 1987.

The 1965 Victorian Football Association season was the 84th season of the top division of the Australian rules football competition, and the fifth season of its second division. The Division 1 premiership was won by the Waverley Football Club, after it defeated Port Melbourne in the Grand Final on 26 September by twelve points; it was the first and only premiership ever won by Waverley in either division in its time in the Association, and it came in only its second season in Division 1. The Division 2 premiership was won by Preston; it was the club's second Division 2 premiership in three years, having competed in and been relegated from Division 1 in the intervening year.

The Carrum-Patterson Lakes Football Club is an Australian rules football club from Melbourne, that was founded in 1909 and currently plays in Division 3 of the Southern Football League. 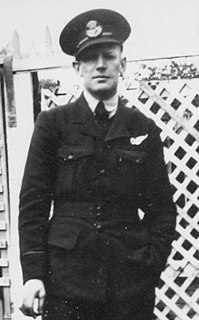