The Hampden Football Netball League is an Australian rules football and netball league based in South-Western Victoria, with clubs located in towns along or near the Princes Highway from Camperdown to Portland.

The league is a major country league. It comprises an amalgamation of the Hampden Football League with the women's netball league with the same teams and playing draw.

The Hampden Football League was formed in 1930, when the four founding clubs broke away from the Western District FL. Terang and Camperdown did not want to continue to travel to Hamilton because their players were farmers who could not spend all day away from the farm to play football, as they had cows to milk. [1] Mortlake agreed with Camperdown and Terang and resigned from the WDFL. Cobden was left with a predicament, and requested admittance to the new league.

In 1933, South Warrnambool and Warrnambool joined the league, as takings at the gate had been greater when playing Camperdown or Terang that against any team in the WDFL.

Colac and Port Fairy were admitted in 1949. Memories for the politics that caused the rift in 1930 meant that the founding clubs were reluctant to allow the shift in power westward. So they allow one club to the west and one to the east. This was repeated in 1961, when they again admitted one western club (Koroit) and one from the east (Coragulac).

Colac and Coragulac merged to form Colac-Coragulac in 1980. In 1986 they dropped Coragulac from the club's name, then in 2001 Colac left the Hampden league to join the Geelong FL.

North Warrnambool were admitted to the league in the 1997 season.

In 1999, Mortlake and Derrinallum merged to form the Western Lions, however the club was not successful and folded during the 2000 season. Mortlake then attempted a new merger with Terang, which has proven successful and continues to the current day, with matches played in both towns. [2]

In 2013 teams from regional centres Hamilton and Portland will compete.

The year 2020, saw the senior football and netball season cancelled as a consequence of the COVID-19 pandemic.

The Shire of Corangamite is a local government area in the Barwon South West region of Victoria, Australia, located in the south-western part of the state. It covers an area of 4,408 square kilometres (1,702 sq mi) and in June 2018 had a population of 16,140. It includes the towns of Camperdown, Terang, Cobden, Timboon, Port Campbell and Skipton. It was formed in 1994 from the amalgamation of the Town of Camperdown, Shire of Hampden, Shire of Heytesbury, and parts of the Shire of Otway, Shire of Mortlake and Shire of Warrnambool. 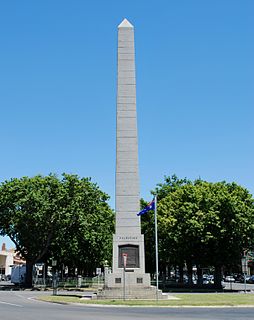 Mortlake is a town in the Western District of Victoria, Australia on the Hamilton Highway, 50 kilometres (31 mi) north-east of Warrnambool. It is in the Shire of Moyne local government area and the federal Division of Wannon. At the 2001 census, Mortlake had a population of 941, rising to 996 in 2006, and to 1,073 in 2011. 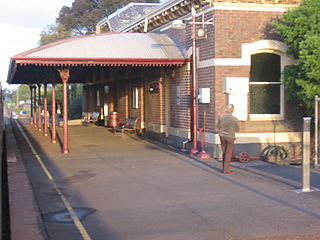 Terang railway station is located on the Warrnambool line in Victoria, Australia. It serves the town of Terang, and it opened on 23 April 1887.

Camperdown is a historically significant rural town in southwestern Victoria, Australia, 190 kilometres (120 mi) west of the state capital, Melbourne. At the 2016 census, Camperdown had a population of 3,369.

Colin Campbell Watson was an Australian rules footballer in the Victorian Football League.

John William Cassin was an Australian rules footballer who played for Essendon in the Victorian Football League (VFL) over eleven seasons in twelve years, and served as the captain coach of the Euroa Football Club in 1948, and of the Colac Football Club from 1949 to 1951. He served with the RAAF in World War II. 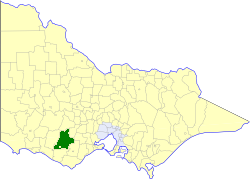 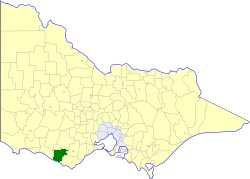 The Shire of Heytesbury was a local government area about 200 kilometres (124 mi) west-southwest of Melbourne, the state capital of Victoria, Australia. The shire covered an area of 1,558.39 square kilometres (601.7 sq mi), and existed from 1895 until 1994.

The Warrnambool railway line is a railway serving the south west of Victoria, Australia. Running from the western Melbourne suburb of Newport through the cities of Geelong and Warrnambool, the line once terminated at the coastal town of Port Fairy before being truncated to Dennington. This closed section of line has been converted into the 37 km long Port Fairy to Warrnambool Rail Trail. The line continues to see both passenger and freight services today.

The Colac & District Football Netball League (CDFNL) is a minor country football league based in the South West of Victoria in the city of Colac. The CDFNL has 10 clubs, all located in the Colac Otway Shire, with the exception of Lorne, which falls within the Surf Coast Shire. The competition incorporates the two sports of Australian rules football and netball.

Adam Coote is an Australian rules football boundary umpire and sprinter. He has umpired 328 games, including 28 final matches and five grand finals since making his debut in the 2005 season. Coote has umpired the fourth highest number of AFL games for a boundary umpire

The South Warrnambool Football Netball Club, nicknamed the Roosters, is an Australian rules football and netball club which competes in the Hampden Football League.

The Camperdown Football Netball Club, nicknamed the Magpies, is an Australian rules football and netball club based in the town of Camperdown, Victoria.

The North Warrnambool Football Netball Club, nicknamed the Eagles, is an Australian rules football and netball club based near the regional city of Warrnambool, Victoria. The club teams currently compete in the Hampden Football Netball League, where the football squad has played since 1997.

John Fahey was an Australian rules footballer who played with South Melbourne in the Victorian Football League (VFL).

John Thompson was an Australian rules footballer who played with Richmond in the Victorian Football League (VFL).

Keith McGarvie was an Australian politician. He was a United Australia Party member of the Victorian Legislative Assembly from 1933 to 1935, representing the electorate of Warrnambool.