The league was formed in 1997, combining all eight teams from the existing Mid Murray Football League, and three sides from the Northern and Echuca Football League. Leitchville-Gunbower joined the league in 2002, while Tooleybuc merged with former Mallee Football League club Manangatang in 2004.

Leitchville-Gunbower moved to the Heathcote District Football League in 2010. 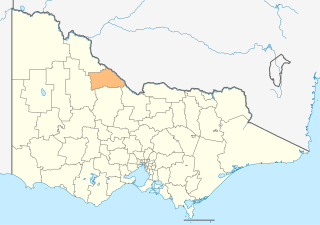 The Shire of Gannawarra is a local government area in Victoria, Australia, located in the northern part of the state. It covers an area of 3,735 square kilometres (1,442 sq mi) and, in June 2018 had a population of 10,547.

Cohuna is a town situated 274 kilometres (170 mi) north of Melbourne, on the Murray Valley Highway, in northern Victoria, Australia. At the 2016 census, Cohuna had a population of 2,428. 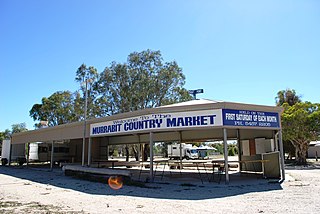 Murrabit is a town in northern Victoria, Australia. It is on the Murray River, 305 kilometres (190 mi) from the state capital, Melbourne and 52 kilometres (32 mi) from Swan Hill. Murrabit is in the Shire of Gannawarra local government area and at the 2016 census, Murrabit and the surrounding area had a population of 201, declining from 330 just five years earlier.

The Balranald Football Club are an Australian football club competing in the Central Murray Football League. The club is based in the town of Balranald in the Riverina region of New South Wales. The club was founded in 1887 and their home ground is called Greenham Park.

The Tyntynder Football Netball Club, nicknamed the Bulldogs, is an Australian rules football and netball club based in the Central Murray Football League. They won three premierships in a row from 1997–99, and also won the 2006 and 2007 Night Series (pre-season).

Leitchville is a town in northern Victoria, Australia. The town is in the Shire of Gannawarra local government area, 262 kilometres from the state capital, Melbourne. At the 2016 census, Leitchville had a population of 558. 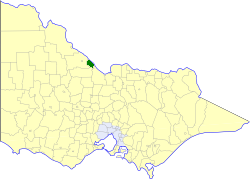 The Shire of Cohuna was a local government area on the Murray River, about 265 kilometres (165 mi) north-northwest of Melbourne, the state capital of Victoria, Australia. The shire covered an area of 494.69 square kilometres (191.0 sq mi), and existed from 1922 until 1995. 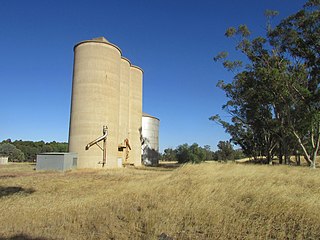 The Cohuna Line is a closed railway line in the north of Victoria, Australia. Branching off the Bendigo-Deniliquin line at Elmore, it ran north-west to a final terminus at Cohuna.

The Kow Swamp, a freshwater lake and wetland, was formerly a swamp, that is now used for water storage. The lake is located in the Mallee region in north-central Victoria, Australia.

The Nyah-Nyah West United Football Netball Club, nicknamed the Demons, is an Australian rules football and netball club based in Nyah, a town in northern Victoria. The Demons teams currently play in the Central Murray League.

The Colbinabbin Football Club is an Australian Rules Football club which competes in the HDFL.

The Leitchville Gunbower Football Club, known as the Bombers, is an Australian Rules Football club which has competed in the HDFL since 2010.

The Lockington Bamawm United Football Club is an Australian Rules Football club which competes in the HDFL.

The North Bendigo Football Club is an Australian rules football club that competes in the Heathcote District Football League (HDFL). 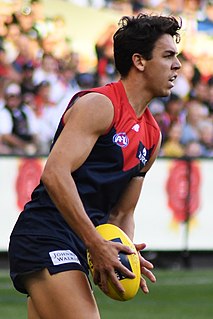 Marty Hore is a professional Australian rules footballer who played for the Melbourne Football Club in the Australian Football League (AFL). He was drafted by Melbourne with their fourth selection and fifty-sixth overall in the 2018 national draft. He made his debut in the twenty-six point loss to Port Adelaide at the Melbourne Cricket Ground in the opening round of the 2019 season. He was delisted by the Demons at the end of the 2021 season.