Forest Lawn Memorial Park was founded in 1906 as a not-for-profit cemetery by a group of businessmen from San Francisco. Dr. Hubert Eaton and C. B. Sims entered into a sales contract with the cemetery in 1912. Eaton took over the management of the cemetery in 1917. Although Eaton did not start Forest Lawn, he is credited as being the "Founder" of Forest Lawn Memorial-Park for his innovations of establishing the "memorial-park plan" (eliminating upright grave markers and bringing in works by established artists) and being the first to open a funeral home on dedicated cemetery grounds. Eaton was a firm believer in a joyous life after death. He was convinced that most cemeteries were "unsightly, depressing stoneyards" and pledged to create one that would reflect his optimistic, Christian beliefs, "as unlike other cemeteries as sunshine is unlike darkness." He envisioned Forest Lawn to be "a great park devoid of misshapen monuments and other signs of earthly death, but filled with towering trees, sweeping lawns, splashing fountains, beautiful statuary, and. memorial architecture." [1] A number of plaques which state Eaton's intentions are signed "The Builder." Frederick Llewellyn, Eaton's nephew, became CEO of Forest Lawn in 1966. In 1987 he was succeeded by his son, John Llewellyn, who is the current Chairman of Forest Lawn. [2]

Most of its burial sections have evocative names, including Eventide, Babyland (for infants, shaped like a heart), Graceland, Inspiration Slope, Slumberland (for children and adolescents), Sweet Memories, Whispering Pines, Vesperland, Borderland (on the edge of the cemetery), and Dawn of Tomorrow.

The objects in Forest Lawn's permanent collection represent specific locations and peoples from around the world. There are sections for India, Africa, the Middle East, East and Southeast Asia, the United States, South America, Australia and Europe. Perhaps the most famous object owned by Forest Lawn's permanent collection is William Bouguereau's 1881 painting Song of the Angels, regarded as one of the most important examples of Bouguereau's work in the United States.[ citation needed ]

The permanent collection also includes one of the largest and most well respected stained glass collections in North America with over 1000 pieces primarily from France and Germany dating from 1200 A.D. through the present. The stained glass collection includes portions of William Randolph Hearst's former collection and works by Albrecht Dürer and Viet Hirsvogel the Elder. The Museum also houses Western bronze sculptures, Italian marble statues, American historical artifacts, paintings, world cultural artifacts, and one of the Easter Island statues (mo'ai), rescued from the bottom of a boat where it was used as ballast. It is named "Henry". These art pieces are put in storage or hidden behind temporary walls when a special display is on site.[ citation needed ]

The six Forest Lawn cemeteries contain about 1,500 statues, about 10% of which are reproductions of famous works of art. Leonardo da Vinci's The Last Supper has been recreated in stained glass in the Memorial Court of Honor at the Glendale location 'in vibrant, glowing and indestructible colors.' There are also a number of full-sized reproductions of other Renaissance sculptures, including Michelangelo's David and Moses . This cemetery is the only place containing a complete collection of replica Michelangelo sculptures,[ citation needed ] which were made from castings taken from the originals and use marble sourced from the original quarries in Carrara, Italy.

Some of the inspiration at Forest Lawn Glendale is patriotic rather than pious, such as the Court of Freedom, with its large mosaic of John Trumbull's Declaration of Independence and a 13-foot (4.0 m)-tall statue of George Washington. On display in the "Hall of the Crucifixion" is the panoramic painting by the Polish artist Jan Styka entitled The Crucifixion. It is the largest permanently mounted religious painting in the world, measuring 195 feet (59 m) in length by 45 feet (14 m) in height. The main gates of Forest Lawn Glendale are claimed to be the world's largest wrought iron gates. [11]

Forest Lawn Glendale has three non-denominational chapels: "The Little Church of the Flowers", "The Wee Kirk o' the Heather" and "The Church of the Recessional", which are all exact replicas of famous European churches. Over 60,000 people have been married here, including Ronald Reagan and Jane Wyman.

More than 335,000 people are buried at Forest Lawn Glendale, and over a million people visit it each year.

Forest Lawn's 300 acres (120 ha) of intensely landscaped grounds and thematic sculptures were the inspiration for the biting commentary of Evelyn Waugh's 1948 satirical novel The Loved One and Jessica Mitford's acerbic 1963 The American Way of Death . Many commentators have considered Forest Lawn to be a unique American creation, and perhaps a uniquely maudlin Los Angeles creation, with its "Disneyland-type theme park" approach to death.

The Great Mausoleum was fashioned after Campo Santo in Genoa, Italy and contains many of the most highly sought after interment places within Forest Lawn Glendale. Within the portion of the Great Mausoleum accessible to the general public is the Court of Honor where individuals are inducted as "Immortals" by Forest Lawn's Council of Regents. The rest of the structure is protected by cameras and is closed to the public unless they have a "loved one" interred here. Time magazine described it as the "New World's Westminster Abbey". In 2009 Forest Lawn Glendale became the focus of intense media interest surrounding the private interment of Michael Jackson in the privacy of Holly Terrace in the Great Mausoleum. [12] [13] [14]

On March 24, 2011, Dame Elizabeth Taylor was interred in the Great Mausoleum in a private Jewish ceremony. 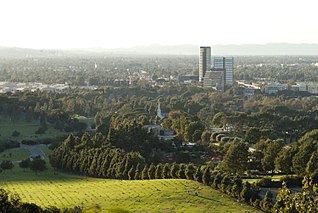 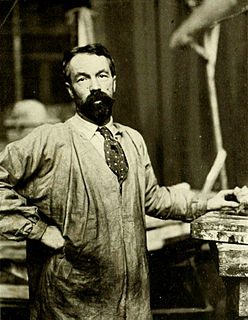 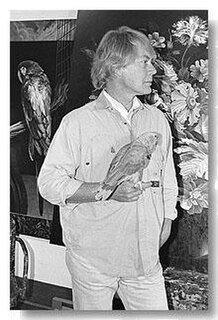 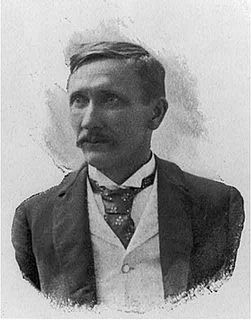 Hubert Lewright Eaton was an American businessman who is known for Forest Lawn Memorial-Parks & Mortuaries in California.

Jan Styka was a Polish painter noted for producing large historical, battle-piece, and Christian religious panoramas. He was also illustrator and poet. Known also as a great patriotic speaker - his speeches were printed in 1915 under the French title L'ame de la Pologne.

Forest Lawn Memorial-Parks & Mortuaries is an American corporation that owns and operates a chain of cemeteries and mortuaries in Los Angeles, Orange, and Riverside counties in Southern California. The company was founded by a group of San Francisco businessmen in 1906. Hubert Eaton assumed management control in 1917 and is credited with being Forest Lawn's "founder" because of his origination of the "memorial-park" plan. The first location was in Tropico, which later became part of Glendale, California. 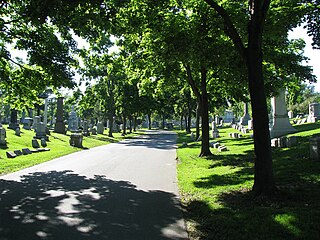 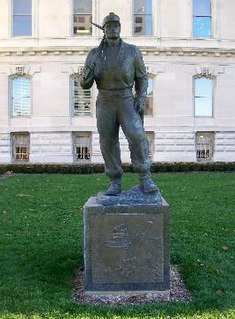 Coal Miner is a public artwork by Polish American artist John J. Szaton (1907–1966) which is located in two US State capitals; the original, commissioned in 1963 in Springfield, Illinois, as well as a copy on the west lawn of the Indiana State House in Indianapolis The statues commemorate coal miners who had lost their lives in those states' mining industry. The 7-foot (2.1 m) tall statue rests on a 3-foot (0.91 m) square, granite base supported by a cement foundation that is 4–6 inches (100–150 mm) thick.

Forest Lawn-Long Beach is a 38-acre mortuary and memorial garden in Long Beach, California, United States. The gardens were established as Sunnyside Memorial Gardens in 1921 by Cecil E. Bryan, Sr., an entrepreneur whose family operated the facility for three generations. Sunnyside was one of the first major cemeteries in Long Beach. Over the years it served the local area, but fell into disrepair by the 1970s. and was purchased in 1978 by Forest Lawn Memorial-Parks & Mortuaries. They renovated the facility, and renamed it Forest Lawn - Sunnyside in deference to its history—later changed to Forest Lawn - Long Beach to match their other properties. 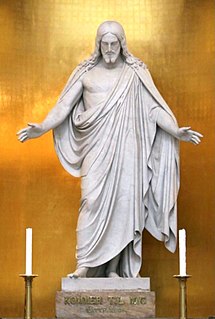 Christus is a 19th-century Carrara marble statue of the resurrected Jesus by Bertel Thorvaldsen. It is located in the Evangelical Lutheran Church in Denmark's Church of Our Lady in Copenhagen, for which it was commissioned as part of a larger group, which includes the apostles. It has been widely reproduced, and in the 20th century, images and replicas of the statue were adopted by the leaders of The Church of Jesus Christ of Latter-day Saints to emphasize the centrality of Jesus Christ in church teachings. The Museum of Socialist Art in Sofia is a museum of art which covers the history of the communist era in Bulgaria. It was established on 19 September 2011 amidst a controversy over the name, which was initially proposed as "Museum of Totalitarian Art". The museum's collection of large and small statues, busts, and paintings represents the period from 1944 to 1989, from the establishment of the People's Republic of Bulgaria to the fall of communism. The museum spread over an area of 7,500 square metres (81,000 sq ft) in the Sofia suburb known as "Red Star is in three parts - a park with sculpture installations drawn from the communist period, an exhibition hall with paintings and easel representations, and a media or video hall in which films and newsreels related to the communist period are screened.