In their ecosystems, whitefish tend to be some of the largest fish and occupy niches as benthic predators. [9] The recent invasion of several invasive species, [10] including the sea lamprey and zebra mussels, [9] has begun to pose a threat to the whitefish population by disrupting historic ecological relationships and prey distribution. [11] This has been exacerbated by other changes to their habitat such as changes in land use, climate change, [10] and the introduction of outside nutrients through runoff. [11]

Overall freshwater whitefish is known for its mild flavor and high omega-3 fatty acid content. [12] It is generally favored by those who dislike stronger fishy taste and is a common choice for fish fries. [12] Lake whitefish is one of the most commonly consumed varieties of freshwater whitefish [12] .  It is especially popular in the Great Lakes region, where it can frequently be found, usually grilled or fried, as a popular offering in many restaurants. Smoked whitefish is locally produced as well. Many freshwater whitefish species have also made up an important component of the traditional diets of many indigenous people who have historically inhabited its range. [13] [14] Other varieties of smoked freshwater whitefish is sold in delicatessens and eaten as part of Ashkenazi Jewish cuisine, either filleted [15] [16] or made into whitefish salad. [17] [18]

Use by indigenous peoples

Lake whitefish, adikameg in ojibwe, has historically been a staple food for the Anishinaabe, [19] a diverse group of tribes native to the North American Midwest. [20] In recent years, following several legal battles which restored the ability of native peoples to exercise their right to hunt and gather, [19] white fish has become a major resource for those communities. Native Alaskan communities also gather whitefish, specifically the inconnu (or sheefish), as a subsistence food. [21]

Evolution due to human interaction

There are a multitude of different species of freshwater whitefish, some are more valued economically than others. Fishing for markets is not uncommon for species such as Coregonus widegreni and Coregonus lavaretus . At the time, there was an increase in younger groups of C. widegreni because when fishing, humans only wanted the larger fish which ended up being the oldest. [22]

Coregonus is a diverse genus of fish in the salmon family (Salmonidae). The Coregonus species are known as whitefishes. The genus contains at least 68 described extant taxa, but the true number of species is a matter of debate. The type species of the genus is Coregonus lavaretus.

Salmonidae is a family of ray-finned fish that constitutes the only currently extant family in the order Salmoniformes. It includes salmon, trout, chars, freshwater whitefishes, graylings, taimens and lenoks, which are collectively known as the salmonids. The Atlantic salmon, whose Latin name became that of its genus Salmo, also derives the family and order names.

Coregonus lavaretus is a species of freshwater whitefish, in the family Salmonidae. It is the type species of its genus Coregonus.

Stenodus leucichthys is a species of freshwater whitefish in the family Salmonidae. In the strict sense its natural distribution is restricted to the Caspian Sea basin, and it is known as beloribitsa. The beloribitsa is now considered extinct in the wild, but survives in cultured stocks. The nelma, a more widespread species of Eurasian and North America, is sometimes considered its subspecies.

The ciscoes are salmonid fish of the genus Coregonus that differ from other members of the genus in having upper and lower jaws of approximately equal length and high gill raker counts. These species have been the focus of much study recently, as researchers have sought to determine the relationships among species that appear to have evolved very recently. The term cisco is also specifically used of the North American species Coregonus artedi, also known as lake herring.

The shortnose cisco is a North American freshwater whitefish in the salmon family Salmonidae. One of the members of the broader Coregonus artedi species complex of ciscoes, it is native to the Great Lakes of Canada and the United States. Its population has been declining and it has disappeared from some of its earlier haunts. The last reported population was restricted to Georgian Bay off Lake Huron in Canada. It is thought that declines in the population of this fish may be linked with the arrival of the sea lamprey, in the Great Lakes. The International Union for Conservation of Nature has rated the conservation status of this fish as "critically endangered", and possibly extinct.

Whitefish or white fish may refer to: 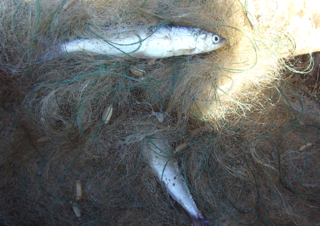 The omul, Coregonus migratorius, also known as Baikal omul, is a whitefish species of the salmon family endemic to Lake Baikal in Siberia, Russia. It is considered a delicacy and is the object of one of the largest commercial fisheries on Lake Baikal. In 2004, it was listed in Russia as an endangered species. 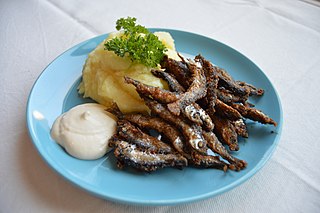 Coregonus albula, known as the vendace or as the European cisco, is a species of freshwater whitefish in the family Salmonidae. It is found in lakes in northern Europe, especially Finland, Latvia, Lithuania, Sweden, Russia and Estonia, and in some lakes of Norway, the United Kingdom, northern Germany, and Poland. It is also found in diluted brackish water in the Gulfs of Finland and Bothnia, both of which are in the Baltic Sea.

The round whitefish is a freshwater species of fish that is found in lakes from Alaska to New England, including the Great Lakes. It has an olive-brown back with light silvery sides and underside and its length is generally between 9 and 19 inches. They are bottom feeders, feeding mostly on invertebrates, such as crustaceans, insect larvae, and fish eggs. Some other fish species, like white sucker in turn eat their eggs. Lake trout, northern pike and burbot are natural predators. Other common names of the round whitefish are Menominee, pilot fish, frost fish, round-fish, and Menominee whitefish. The common name "round whitefish" is also sometimes used to describe Coregonus huntsmani, a salmonid more commonly known as the Atlantic whitefish.

Stenodus is a genus of large-sized whitefish in the family Salmonidae. It consists of two species; one of them (beloribitsa) is extinct in wild. The two species have alternatively been considered subspecies of the single species Stenodus leucichthys.

The pygmy whitefish is a freshwater whitefish of the genus Prosopium in the family Salmonidae. Found in the mountain streams and lakes in western North America, it also has isolated populations in Lake Superior and in Ekityki Lake, Chukchi Peninsula.

Coregonus fontanae, also known as the Stechlin cisco, Fontane cisco, or Fontane's cisco, is a species of freshwater whitefish in the family Salmonidae endemic to the Großer Stechlinsee in northern Germany. It is believed to have recently evolved from the sympatric vendace, Coregonus albula.

The Alaska whitefish is a species of whitefish in the family Salmonidae. It is found in parts of northwestern North America, where it occurs only in small and large rivers, and rarely in lakes. The maximum length recorded for this species is 56.0 cm (22.0 in). 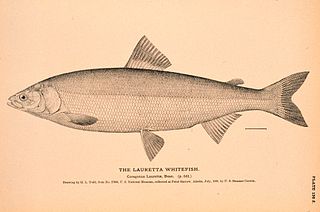 The Bering cisco or Lauretta whitefish is a freshwater whitefish found in Alaska and part of Russia. It is often considered to be the same species as the more common Arctic cisco.

The Peipsi whitefish is a freshwater whitefish of the family Salmonidae that naturally occurs in Lake Peipus on the border of Estonia and Russia, from where it also ascends to Lake Võrtsjärv to spawn. It has been introduced in Lake Burtnieks (Latvia), Gulf of Riga, many lakes of northern Russia, Poland, Germany, Netherlands, Japan, Lake Sevan (Armenia) and Balkash (Kazakhstan). It is a benthopelagic fish up to 60 cm long.

Coregonus tugun, the tugun, is a species freshwater whitefish from rivers draining to the Arctic Ocean. It is one of the several species of Siberian whitefishes, with a distribution encompassing rivers from the Ob in the west to the Yana River in the east. In the Lower Ob basin, it inhabits in all the Ural tributaries. It never enters the sea.