Founded in 1813 by Quakers as The Asylum for the Relief of Persons Deprived of the Use of Their Reason, the institution was later renamed the Frankford Asylum for the Insane. It was the first private mental hospital in the nation, and is the oldest such institution with a continuous history of operation. Its campus, which dates to its founding, is a National Historic Landmark. [2]

Friends Hospital is accredited by the Joint Commission on Accreditation of Healthcare Organizations and licensed by the Commonwealth of Pennsylvania.

The 1813 mission statement of the hospital was "To provide for the suitable accommodation of persons who are or may be deprived of the use of their reason, and the maintenance of an asylum for their reception, which is intended to furnish, besides requisite medical aid, such tender, sympathetic attention as may soothe their agitated minds, and under the Divine Blessing, facilitate their recovery."

The Quakers established Friends Hospital in 1813, drawing on a belief that all persons could live a "moral, ordered existence if treated with kindness, dignity, and respect", despite disabilities. The influential minister Thomas Scattergood decried what he considered the harsh conditions faced by patients in mental asylums; Scattergood instead called for the "moral treatment" of patients. This model served as an inspiration for the establishment of the Friends Asylum for Persons Deprived of the Use of Their Reason; it was the nation's first privately run psychiatric hospital. [3]

The Retreat, commonly known as the York Retreat, is a place in England for the treatment of people with mental health needs. Located in Lamel Hill in York, it operates as a not for profit charitable organisation. 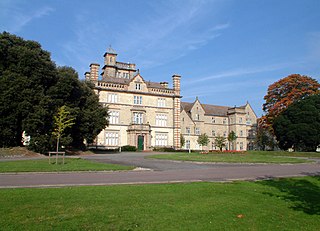 An intensive outpatient program (IOP), also known as an intensive outpatient treatment (IOT) program, is a structured non-residential psychological treatment program which addresses mental health disorders and substance use disorders (SUDs) that do not require detoxification through a combination of group-based psychotherapy, individual psychotherapy, family counseling, educational groups, and strategies for encouraging motivation and engagement in treatment. IOP operates on a small scale and does not require the intensive residential or partial day services typically offered by the larger, more comprehensive treatment facilities.

The Institute of Living is a comprehensive psychiatric facility in Hartford, Connecticut, that offers care across the spectrum of psychiatric services, including:

The Jersey City Medical Center is a hospital in Jersey City, New Jersey. The hospital has had different facilities in the city. It is currently located on a 15-acre campus at Grand Street and Jersey Avenue overlooking New York Harbor and Liberty State Park. The campus includes three facilities: the Wilzig Hospital, the Provident Bank Ambulatory Center, and the Christie Kerr Women's Health Center. The hospital serves as a regional referral and teaching hospital.

Cherry Hospital is an inpatient regional referral psychiatric hospital located in Goldsboro, North Carolina, United States. As one of three psychiatric hospitals operated by the North Carolina Department of Health and Human Services, it provides services to 38 counties in the eastern region of North Carolina. It is part of the Division of State Operated Healthcare Facilities within the Department of Health and Human Services, which oversees and manages 14 state-operated healthcare facilities that treat adults and children with mental illness, developmental disabilities, and substance use disorders. The Division's psychiatric hospitals provide comprehensive inpatient mental health services to people with psychiatric illness who cannot be safely treated at a lower level of care.

Services for mental health disorders provide treatment, support, or advocacy to people who have psychiatric illnesses. These may include medical, behavioral, social, and legal services.

Silver Hill Hospital is a non-profit psychiatric hospital in New Canaan, Connecticut. established in 1931. The hospital is accredited by the Joint Commission and provides behavioral health care treatment. This includes psychiatric and addiction services.

Skyland Trail is a private, not-for profit organization in Atlanta, Georgia offering treatment to adults ages 18 and older and adolescents ages 14 to 17 with mental illness. Skyland Trail specializes in treating adults and adolescents with bipolar disorder, schizophrenia, depression, and anxiety disorders. Many adult patients have co-occurring diagnoses such as substance use disorders, borderline personality disorder, anxiety disorders, and/or a history of trauma. 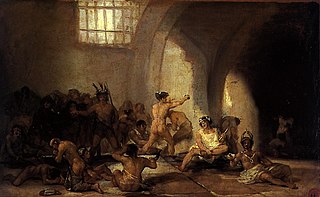 The lunatic asylum was an early precursor of the modern psychiatric hospital.

The Psychiatric Institute of Washington (PIW) is an acute psychiatric hospital in Washington, D.C. Opened in 1967, PIW is a short-term, private hospital. It offers behavioral healthcare to patients with mental and addictive illnesses, including children, adolescents, adults and the elderly. Services offered by PIW include inpatient, partial and intensive outpatient hospitalization, and group treatment programs for substance abuse and addiction.

In a study in Western societies, homeless people have a higher prevalence of mental illness when compared to the general population. They also are more likely to suffer from alcoholism and drug dependency. It is estimated that 20–25% of homeless people, compared with 6% of the non-homeless, have severe mental illness. Others estimate that up to one-third of the homeless have a mental illness. In January 2015, the most extensive survey ever undertaken found 564,708 people were homeless on a given night in the United States. Depending on the age group in question, and how homelessness is defined, the consensus estimate as of 2014 was that, at minimum, 25% of the American homeless—140,000 individuals—were seriously mentally ill at any given point in time. 45% percent of the homeless—250,000 individuals—had any mental illness. More would be labeled homeless if these were annual counts rather than point-in-time counts. Being chronically homeless also means that people with mental illnesses are more likely to experience catastrophic health crises requiring medical intervention or resulting in institutionalization within the criminal justice system. Majority of the homeless population do not have a mental illness. Although there is no correlation between homelessness and mental health, those who are dealing with homelessness are struggling with psychological and emotional distress. The Substance Abuse and Mental Health Services Administration conducted a study and found that in 2010, 26.2 percent of sheltered homeless people had a severe mental illness.

Bakırköy Psychiatric Hospital, short for Bakırköy Mazhar Osman Mental Health and Neurological Diseases Education and Research Hospital, is a mental health hospital of the Health Ministry located in Bakırköy district of Istanbul, Turkey. The hospital is named after Mazhar Osman, who is also considered the founder of modern psychiatry in Turkey.