Guarianthe skinneri is a species of orchid. It is native to Costa Rica; from Chiapas to every country in Central America. [1]

Central America is a region found in the southern tip of North America and is sometimes defined as a subcontinent of the Americas. This region is bordered by Mexico to the north, Colombia to the southeast, the Caribbean Sea to the east and the Pacific Ocean to the west and south. Central America consists of seven countries: Belize, Costa Rica, El Salvador, Guatemala, Honduras, Nicaragua and Panama. The combined population of Central America is estimated at 44.53 million (2016).

The orchid genus Dracula, abbreviated as Drac in horticultural trade, consists of 118 species native to Mexico, Central America, Colombia, Ecuador and Peru. The name Dracula literally means "little dragon", an allusion to the mythical Count Dracula, a lead character in numerous vampire novels and films. The name was applied to the orchid because of the blood-red color of several of the species, the strange aspect of the long spurs of the sepals. The plants were once included in the genus Masdevallia, but became a separate genus in 1978. This genus has been placed in the subtribe Pleurothallidinae. 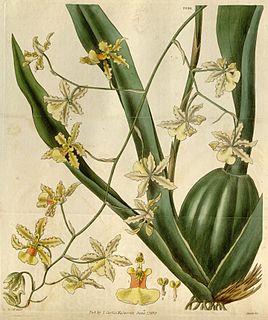 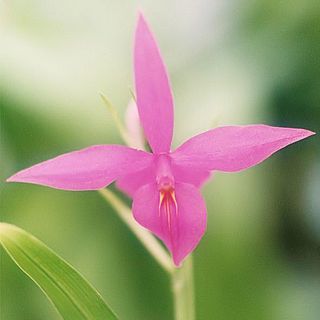 Barkeria, abbreviated Bark in horticultural trade, is a genus of orchids. It consists of about 17 currently recognized species native to Mexico and Central America. This genus was once considered part of Epidendrum. Type species is Barkeria elegans; this is now considered a synonym of B. uniflora yet retains its status as type per ICN.

Stellilabium is a small genus in the orchid family (Orchidaceae).

Guarianthe, abbreviated Gur. in the horticultural trade, is a small genus of epiphytic orchids, growing in wet forests in Mexico, Central America, Colombia, Venezuela and Trinidad. It was separated from the bifoliate Cattleyas in 2003, based on phylogenetic studies of nuclear DNA sequence data 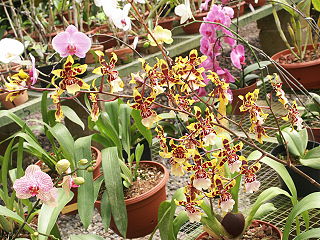 The Lankester Botanical Gardens are a set of gardens outside of Cartago, Costa Rica. The garden is open to the public, but is operated by the University of Costa Rica (UCR) as a research center and is a major center for orchid research in both Central America and the Caribbean.

Lycaste skinneri, also known as Lycaste virginalis, is a species of epiphyte orchid that resides in the south of Mexico, Guatemala, El Salvador and Honduras, at an average altitude of 1650 meters above sea level. 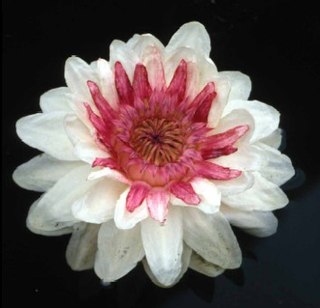 The Flora of Colombia is characterized by 130,000 species of plants that have been described within Colombian territory.

Beloglottis is a genus of the family Orchidaceae. This genus belongs to the tribe Cranichideae and subtribe Spiranthinae. Orchids of the genus Beloglottis are terrestrial sympodial plants that can be used as herbal supplements. They have short, solitary stems that stand erect and the fleshy roots contain small hair-like projections and are arranged in a fascicle. Several leaves containing a petiole form at the base of the plant. The flowers appear as if they are upside down. 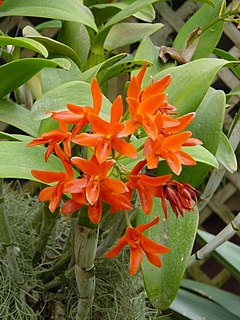 Guarianthe aurantiaca is a species of orchid. It is widespread across much of Mexico, south to Costa Rica. The diploid chromosome number of G. aurantiaca has been determined as 2n = 40. 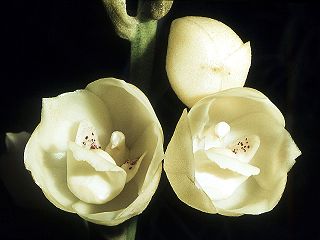 Peristeria elata is a species of orchid occurring from Central America to Panamá, Venezuela and Ecuador. It is the type species of its genus. It is commonly referred to as the Holy Ghost orchid, dove orchid or flower of the Holy Spirit in English, and, as the flor del Espiritu Santo in Spanish.

Guarianthe patinii is a species of orchid. It is native to Costa Rica, Panama, Colombia, Venezuela, and Trinidad; it is also reportedly naturalized in Ecuador.

Lepanthes machogaffensis is a species of Neotropical orchid described in 2009. It is endemic to Costa Rica and has so far only been found in Tapantí National Park. It has red petals and may flower several times during the year, yet its flowers only last for three days. It is named after the MachoGaff virgin forest within the park where it was found. 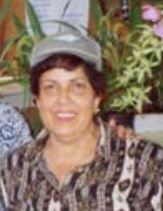 Dora Emilia Mora de Retana was a noted Costa Rican botanist, known primarily for her work with orchids. She compiled an extensive catalogue of the variations of the flower found in Costa Rica which became the seminal reference work on the family Orchidaceae in the country for over a decade. There are at least five species of orchids named in her honor and in 2011, a plaque bearing her name was installed at the Lankester Botanical Garden to recognize her contributions to its development.