The Crimson fielded their first varsity team in 1905, making the team one of the oldest college soccer programs in the United States, and one of the oldest continuously operating soccer programs in the United States. Most of the Crimson's success came in the mid-1910s, where they won two ISFL championships (the college soccer predecessor to the NCAA), and again in the late 1920s to the early 1930s. Several professional soccer players, including Shep Messing, Ross Friedman, Andre Akpan, Michael Fucito and John Catliff played for the Crimson, as well as several notable professionals outside of the soccer world. This includes Theodore Roosevelt III, Daniel Needham and John Johansen.

From 2013 through 2019, the Crimson were coached by Pieter Lehrer, a former assistant coach for the California Golden Bears men's soccer program. In 2014, Ross Friedman attained two all-time Harvard records with 12 season assists and 17 career assists, also ranking 6th in the NCAA in assists and 5th in assists per game. [2]

In November 2016, the team were suspended by the university after the student newspaper The Harvard Crimson published an article which indicated that team members had shared a yearly document in which they ranked new members of Harvard Crimson women's soccer team by their sex appeal and described them using sexually explicit terms. The suspension meant that they could no longer participate in any further games in the 2016 Ivy League men's soccer season (which they had been leading at the time of the suspension) or the National Collegiate Athletic Association. [3] [4] [5]

Harvard has won 13 Ivy League championships. [12] The Ivy League began sponsoring men's varsity soccer in 1955. Prior to 1955, Harvard competed as an Independent. [13]

Harvard has fielded 38 first-team All-Americans. [14] Several players including Andre Akpan, John Catliff and Will Kohler had professional careers following college. [15] [16] Other notable All-Americans include John Johansen, who was part of the Harvard Five [17] and Daniel Needham, who was a future politician and commanding general for the 26th Infantry Division. [18] [19] [20]

The Yale Bulldogs are the intercollegiate athletic teams that represent Yale University, located in New Haven, Connecticut. The school sponsors 35 varsity sports. The school has won two NCAA national championships in women's fencing, four in men's swimming and diving, 21 in men's golf, one in men's hockey, one in men's lacrosse, and 16 in sailing.

The Harvard Crimson rugby team is a National Collegiate Athletic Association (NCAA) Division I rugby union program that represents Harvard University. Having been established in 1872, Harvard has the oldest rugby college program in the United States. In past years, the team traveled to Berkeley, California for the National Tournament after having taken the Ivy League title.

Rocco Benito Commisso is an Italian-born American billionaire businessman, and the founder, chairman and chief executive officer (CEO) of Mediacom, the fifth largest cable television company in the US. As of 2011, the company is privately owned by Commisso. He previously worked for companies including Cablevision, the Royal Bank of Canada, and Chase Manhattan Bank. Since 2017, Commisso has been the owner and chairman of the New York Cosmos, and since June 2019, the owner of the Italian football club ACF Fiorentina.

Andrew Hatch is a football player and baseball player who has played collegiately for both Harvard University and Louisiana State University. 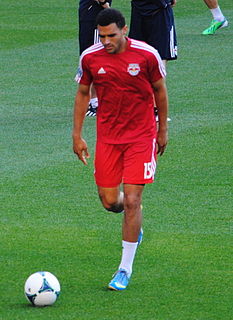 Floyd Wilson was a basketball coach at Harvard University. Wilson coached for 14 years from 1954 to 1968. Prior to becoming the Varsity head-coach, Wilson spent time as the Freshman basketball coach. While coaching Harvard, Wilson won 143 games. This mark stood as the most wins for a Crimson coach until Frank Sullivan passed the mark in 2004. Each year the 'Floyd Wilson Sportsmanship Award' is given to the Harvard basketball player "whose respect for sportsmanship recalls the manner and values of Floyd Wilson" As with most coaches, Coach Wilson was not immune to criticisms from the press. Wilson was replaced by NBA All-Star Bob Harrison as head coach in 1968. His best season came in 1957–58 when the team went 16–9 and finished 5th in the Ivy League.

The Eastern Intercollegiate Basketball League was an athletic conference for men's college basketball, beginning with the 1901–02 season and ending with the 1954–55 season. Its membership ranged from four to eight members; all of these teams now compete in the Ivy League, which began play in 1955–56 and considers its men's basketball league to be a continuation of the EIBL. The EIBL/Ivy is the oldest basketball conference in the National Collegiate Athletic Association; the next oldest, the Big Ten Conference, began play in 1905–06.

The Harvard Crimson fencing team is the intercollegiate fencing team for Harvard University located in Cambridge, Massachusetts. The team competes in the Ivy League within the NCAA Division I. The university first fielded a team in 1888.

The Dartmouth–Harvard football rivalry is an American college football rivalry between the Dartmouth Big Green and Harvard Crimson. The series began in 1882 and is considered one of the fifteen oldest rivalries in College football. Since the formation of the Ivy League in 1954, the annual game has been a key decider in the crowning of the league's champion. Dartmouth has captured a league-record 19 Ivy League championships, while the Crimson have obtained 17 titles, tied for third-most. Furthermore, since the start of round-robin play, Harvard and Dartmouth have posted the first- and second-best league winning percentages at 0.628 and 0.606 respectively.

The Harvard Crimson women's basketball team is the intercollegiate women's basketball program representing Harvard University. The school competes in the Ivy League in Division I of the National Collegiate Athletic Association (NCAA). The Crimson play home basketball games at the Lavietes Pavilion in Boston, Massachusetts near the university campus. They are the first team in NCAA basketball history to win in national tournament play as a #16 seed against a #1 seed.

Danilo Djuricic is a Canadian professional basketball player for Scarborough Shooting Stars of the CEBL. He previously played for the Harvard Crimson.

The 2017–18 Harvard Crimson women's basketball team represents Harvard University during the 2017–18 NCAA Division I women's basketball season. The Crimson, led by thirty-sixth year head coach Kathy Delaney-Smith, play their home games at the Lavietes Pavilion and were members of the Ivy League. They finished the season 18–11, 10–4 in Ivy League play to finish in third place. They lost in the semifinals of the Ivy women's tournament to Penn. They received an at-large bid to the WNIT where they lost to Fordham in the first round.

The 2019 Ivy League men's soccer season was the 65th season of the conference sponsoring men's varsity soccer. The season began in August 2019 and concluded in November 2019.

The Harvard–Yale soccer rivalry is a rivalry between Harvard University and Yale University. The men's series has been played regularly since 1907, while the women's teams have played since 1977. For over fifty years, the annual Harvard–Yale soccer game was played as a "curtain raiser" to the schools' gridiron football game, known simply as The Game. In addition to its varsity soccer teams which compete in the Ivy League, the two schools' intramural soccer champions have regularly featured in the annual Harkness Cup games, named after Edward Harkness, a benefactor of both universities.