In graph theory, a branch of mathematics, an indifference graph is an undirected graph constructed by assigning a real number to each vertex and connecting two vertices by an edge when their numbers are within one unit of each other. [1] Indifference graphs are also the intersection graphs of sets of unit intervals, or of properly nested intervals (intervals none of which contains any other one). Based on these two types of interval representations, these graphs are also called unit interval graphs or proper interval graphs; they form a subclass of the interval graphs.

The finite indifference graphs may be equivalently characterized as

For infinite graphs, some of these definitions may differ.

In the Erdős–Rényi model of random graphs, an

-vertex graph whose number of edges is significantly less than

will be an indifference graph with high probability, whereas a graph whose number of edges is significantly more than

will not be an indifference graph with high probability. [9]

The bandwidth of an arbitrary graph

as a subgraph and is chosen to minimize the size of the maximum clique. [10] This property parallels similar relations between pathwidth and interval graphs, and between treewidth and chordal graphs. A weaker notion of width, the clique-width, may be arbitrarily large on indifference graphs. [11] However, every proper subclass of the indifference graphs that is closed under induced subgraphs has bounded clique-width. [12]

Indifference graphs obey the reconstruction conjecture: they are uniquely determined by their vertex-deleted subgraphs. [15]

As with higher dimensional unit disk graphs, it is possible to transform a set of points into their indifference graph, or a set of unit intervals into their unit interval graph, in linear time as measured in terms of the size of the output graph. The algorithm rounds the points (or interval centers) down to the nearest smaller integer, uses a hash table to find all pairs of points whose rounded integers are within one of each other (the fixed-radius near neighbors problem), and filters the resulting list of pairs for the ones whose unrounded values are also within one of each other. [16]

Once the vertices have been sorted by the numerical values that describe an indifference graph (or by the sequence of unit intervals in an interval representation) the same ordering can be used to find an optimal graph coloring for these graphs, to solve the shortest path problem, and to construct Hamiltonian paths and maximum matchings, all in linear time. [4] A Hamiltonian cycle can be found from a proper interval representation of the graph in time

, [13] but when the graph itself is given as input, the same problem admits linear-time solution that can be generalized to interval graphs. [21] [22]

List coloring remains NP-complete even when restricted to indifference graphs. [23] However, it is fixed-parameter tractable when parameterized by the total number of colors in the input. [12]

In mathematical psychology, indifference graphs arise from utility functions, by scaling the function so that one unit represents a difference in utilities small enough that individuals can be assumed to be indifferent to it. In this application, pairs of items whose utilities have a large difference may be partially ordered by the relative order of their utilities, giving a semiorder. [1] [24]

In bioinformatics, the problem of augmenting a colored graph to a properly colored unit interval graph can be used to model the detection of false negatives in DNA sequence assembly from complete digests. [25] 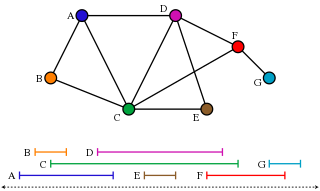 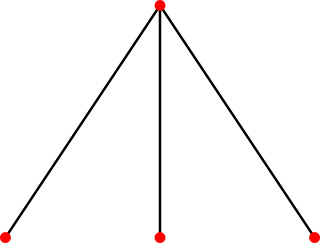 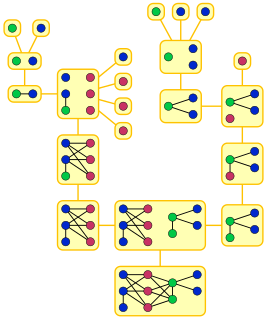 In the mathematical area of graph theory, a k-leaf power of a tree is a graph whose vertices are the leaves of and whose edges connect pairs of leaves whose distance in is at most . That is, is an induced subgraph of the graph power , induced by the leaves of . For a graph constructed in this way, is called a k-leaf root of .