John Duncan "Jock" Semple (October 26, 1903 – March 10, 1988) was a Scottish-American runner, physical therapist, trainer, and sports official. In 1967, he attained worldwide notoriety as a race official for the Boston Marathon, when he physically assaulted and attempted to tear off the bib number from 20 year old marathon runner Kathrine Switzer. Switzer was officially entered in the race in accordance with the Boston Marathon's rule book which at that time made no mention of gender, [1] [ better source needed ] despite Semple saying that amateur rules banned women racing for more than a mile and a half (2400 m). [2] He subsequently oversaw implementation of qualifying times in 1970 and, in response to lobbying and rule changes by the Amateur Athletic Union (AAU), the implementation of a separate women's race in 1972. [3]

Semple was born in Glasgow, Scotland, and emigrated to the United States in 1921 to work as a cabinetmaker in Philadelphia. He moved to Boston after running in his first Boston Marathon and began to work in sport-related fields. He was a masseur and physical therapist for the Boston Bruins and the Boston Celtics, and a trainer for Olympic athletes.

Semple became known to a lay audience while working as a Boston Marathon race co-director. He had an established history dating back to at least 1957 of physically attacking Boston Marathon runners he perceived to be "non serious" competitors, whether officially entered or running the course unofficially. [2] In a 1968 interview with Sports Illustrated , [2] he remarked "These screwballs! These weirdies!" crying at the ceiling "These MIT boys! These Tufts characters! These Harvard guys! They write me askin' should they put on spiked shoes for the marathon!" According to fellow race official Will Cloney: "He hurls not only his body at them, but also a rather choice array of epithets... Jock's method of attack is apt to vary." In 1957, Semple narrowly escaped arrest for assault after attempting to knock down a marathon competitor who was wearing webbed snorkeler's shoes and a grotesque mask. "The thing that made me so damned mad," Semple said, "was that the guy was runnin' with the good runners." at the 6.5 miles (10.5 km) mark. [2]

Roberta "Bobbi" Gibb completed the 1967 Boston Marathon unofficially; she had completed the marathon in 1966 having been denied an official entry by race director Will Cloney who rejected her registration with the claim that women were physiologically incapable of running 26 miles (42 km). Gibb finished the 1966 race in 3 hours, 21 minutes and 40 seconds, [4] ahead of two-thirds of the runners. Another woman, Kathrine Switzer, also completed the 1967 race having registered officially (the Boston Marathon rule book made no mention of gender [1] ). Semple said her race registration was a result of an "oversight" in the entry screening process. [5] :7 Semple tried to stop Switzer by repeatedly hitting her as she ran. [1] [6] [5] :114–118 Switzer wrote in her memoir "A big man, a huge man, with bared teeth was set to pounce, and before I could react he grabbed my shoulder and flung me back, screaming, 'Get the hell out of my race and give me those numbers!'" [7] Switzer's boyfriend Tom Miller managed to shove Semple aside after Semple had knocked Switzer's coach to the ground when he attempted to protect Switzer; both Miller and Switzer's coach were competing in the race alongside Switzer. [1] In a 1968 interview Semple said Miller's success in stopping Semple was because he was a hammer thrower. [2] Photographs of Semple attempting to rip Switzer's number off were widespread in the media. [2]

A consequence of Switzer's completion of the 1967 Boston Marathon as an officially registered runner in line with the rules then in force was that the AAU changed its rules to bar women from competing in races against men. [8]

Later in life, Semple reversed his position on women competing in the marathon. According to Marja Bakker (a later organizer of the race), "Once the rule was adjusted and women were allowed in the race, Jock was one of their staunchest supporters. He was very progressive." [9] Semple later publicly reconciled with Switzer. [10]

In 1981, he published an autobiography, Just Call Me Jock. [5] He was inducted into the RRCA American Long Distance Running Hall of Fame in 1985. [11]

Semple died of cancer of the liver and pancreas in March 1988 in Peabody, Massachusetts. [3] [12] He and Kathrine Switzer had become friends and she would visit him at the hospital where he was being treated for his cancer. [13] The Jock Semple Award given by the Boston Athletic Association is named in his honor.

USA Track & Field (USATF) is the United States national governing body for the sports of track and field, cross country running, road running and racewalking. The USATF was known between 1979 and 1992 as The Athletics Congress (TAC) after its spin off from the Amateur Athletic Union (AAU), which governed the sport in the US through most of the 20th century until the Amateur Sports Act of 1978 dissolved its responsibility. Based in Indianapolis, USATF is a non-profit organization with a membership of nearly 130,000. The organization has three key leadership positions: CEO Max Siegel, Board of Directors Chair Steve Miller, and elected President Vin Lananna. 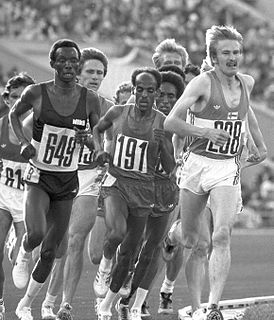 In many sports, a competition number is used to identify and differentiate the competitors taking part in a competitive endeavour. For example, runners in a race may wear a prominent competition number so that they may be clearly identified from a distance. Competition numbers are differentiated from uniform numbers in that the former are used for a specific event while the latter persist over time through multiple events, seasons, or sometimes an entire career. 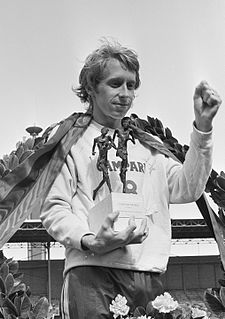 William Henry Rodgers is an American former runner, Olympian and former record holder in the marathon. Rodgers is best known for his four victories in both the Boston Marathon, including three straight 1978-1980 and the New York City Marathon between 1976 and 1980.

The Manchester Road Race is a 4.748 mile (7.641 km) footrace held annually on Thanksgiving Day in Manchester, Connecticut. Race proceeds are donated each year to Muscular Dystrophy research and about 18 other local charities. Beginning promptly at 10:00am every Thanksgiving Morning, the race attracts athletes of all ages and abilities. First run in 1927, the race regularly attracts accomplished runners from across the United States as well as internationally recognized competitors. 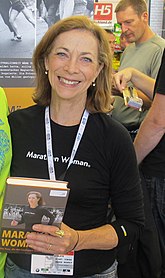 Thomas J. Fleming was an American distance runner who won the 1973 and 1975 New York City Marathon. He was also a two time runner-up in the Boston Marathon in 1973 and 1974 and finished six times in the top ten in the BAA marathon. Fleming was the winner of the Cleveland, Toronto, Los Angeles, Jersey Shore and Washington DC marathons in the 1970s. He set a personal best of 2:12:05 in the Boston Marathon 1975, and was renowned for running 110 to 150 miles per week to train for road racing. He was awarded the United Nations Peace Medal in 1977.

Nina Kuscsik is a retired female long-distance runner from the United States, who has participated in over 80 marathons. 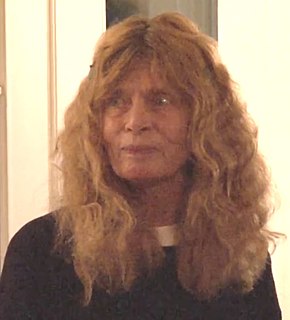 Ron Daws was a runner and 1968 Summer Olympics men's marathon athlete. Born in Minneapolis, Minnesota, he also competed at the 1967 Pan-American Games marathon and finished first in the National AAU Marathon also in 1967 on June 11.

Maureen "Moe" Wilton is a former Canadian long-distance runner who is recognized by the International Association of Athletics Federations as having set a world best in the marathon on May 6, 1967 with a time of 3:15:23 in Toronto, Ontario, Canada. Wilton, who started running when she was nine years old, was 13 when she set the mark; it was her first marathon and run on an unpaved Eastern Canadian Marathon Championships course. Her time broke the previous record, set in 1964, by more than four minutes.

The 2013 Boston Marathon was the 117th running of the annual marathon race in Boston, Unites States which took place on April 15, 2013. Organized by the Boston Athletic Association (B.A.A.), it hosted the second of the World Marathon Majors to be held in 2013 with over 23,000 runners participating. Lelisa Desisa won the elite men's race with a time of 2:10:22, and Rita Jeptoo won the women's race with a time of 2:26:25. Hiroyuki Yamamoto won the men's wheelchair race in 1:25:32 and Tatyana McFadden won the women's race in 1:45:25. 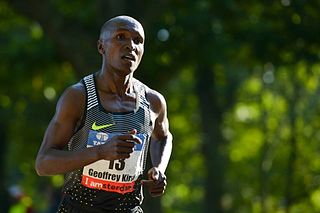 Geoffrey Kipkorir Kirui is a Kenyan long-distance runner who competes in cross country running competitions, track and road races up to the marathon.

Sara Mae Berman is an American marathon runner. Berman won the Boston Marathon as an unofficial winner from 1969 to 1971 as women were not allowed to compete until 1972. At subsequent Boston Marathons, Berman had a fifth place finish in both 1972 and 1973. Berman's wins were made official by the Boston Athletic Association in 1996. Outside of Boston, Berman finished third at the 1971 New York City Marathon. In 2015, she was inducted into the Road Runners Club of America Hall of Fame.

The 2019 New York City Marathon was the 49th running of the annual marathon race held in New York City, United States, which took place on November 3, 2019. The men's race was won by Kenyan Geoffrey Kamworor in a time of 2:08:13. The women's race was won in 2:22:38 by Kenyan Joyciline Jepkosgei, making her official debut at the distance. In the wheelchair races, American Daniel Romanchuk (1:37:24) and Switzerland's Manuela Schär (1:44:20) won the men's and women's races, respectively. A total of 53,508 runners finished the race, comprising 30,794 men and 22,714 women.

The Avon International Marathon was an annual women's marathon event that was held at various locations from 1978 to 1984. Sponsored and organised by Avon Products, a beauty and household goods company, it was the longest distance race within the Avon International Women's Running Circuit, which was created with the aim of promoting elite and grassroots road running for women. The circuit was headed by former runner Kathrine Switzer, whose efforts had led to the formal acceptance of women at the Boston Marathon.