Bloor was born in a small Derbyshire village, his father was a coal miner. He suffered from health problems, and long absences from school limited his formal education, leaving school at the age of 15. [2]

Bloor's first job was as a trainee plasterer for a local building contractor. Two years later he set up his own business and began building his first house before he was 20. His building company, Bloor Homes, is now one of the largest privately owned house builders in the UK, [3] and has contributed to the successful regeneration of the East Midlands. [2] In 2002, housing sales reached 1,870 making Bloor Homes then the largest housebuilder to be owned by one man. [4]

While attending the auction of the site of the former Triumph factory to buy the site for house construction, Bloor bought the collapsed Triumph brand in 1983. [5] After sub-licensing the brand for a period, he invested over £80 million into rebuilding the marque, opening the new Hinckley factory in 1991. [6] After a factory fire in 2002 stopped production the factory was rebuilt, and now produces 46,000 motorcycles per annum. [7]

In 2016, Bloor received the Diamond Jubilee Trophy on behalf of all the staff at Triumph Motorcycles. The Trophy has only been given out four times previously. [8]

In 2018, Bloor was paid a £7 million dividend by Bloor Holdings, the company that owns Bloor Homes and Triumph. [9]

Bloor lives in Swadlincote, South Derbyshire, England. Due to hip problems he rarely rides motorcycles, preferring a Range Rover. [6] He has two sons, Adrian and Nick. Adrian was chief executive of Bloor Homes until early 2020. [11] 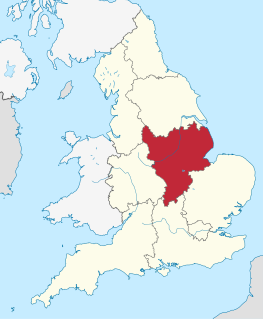 The East Midlands is one of nine official regions of England at the first level of NUTS for statistical purposes. It consists of Derbyshire, Leicestershire, Lincolnshire, Northamptonshire, Nottinghamshire and Rutland. The region has an area of 15,627 km2 (6,034 sq mi), with a population over 4.5 million in 2011. The most populous settlements in the region are Derby, Leicester, Lincoln, Mansfield, Northampton and Nottingham. Other notable settlements include Boston, Chesterfield, Corby, Grantham, Hinckley, Kettering, Loughborough, Newark-on-Trent, Skegness, Wellingborough, and Worksop.

Coalville is an industrial town in the district of North West Leicestershire, Leicestershire in the East Midlands of England, with a population at the 2011 census of 34,575. It lies on the A511 trunk road between Leicester and Burton upon Trent, close to junction 22 of the M1 motorway where the A511 meets the A50 between Ashby-de-la-Zouch and Leicester. It borders the upland area of Charnwood Forest to the east of the town.

The University of Leicester is a public research university based in Leicester, England. The main campus is south of the city centre, adjacent to Victoria Park. The university's predecessor, University College, Leicester, gained university status in 1957.

Swadlincote is a former mining town in the district of South Derbyshire, England, lying within The National Forest area. It borders the counties of Leicestershire and Staffordshire, 5 miles (8 km) south-east of Burton upon Trent and north-west of Ashby-de-la-Zouch, and 11.5 miles (19 km) south-west of Derby. It also covers Newhall, Oversetts, Midway and the villages of Church Gresley and Woodville, with the sub-district of Goseley. It has a population of some 36,000. Castle Gresley is 2 miles (3 km) to the south-west and Albert Village 1.5 miles (2 km) to the south.

North West Leicestershire is a constituency represented in the House of Commons of the UK Parliament since 2010 by Andrew Bridgen, a Conservative.

Barratt Developments plc is one of the largest residential property development companies in the United Kingdom operating across England, Wales and Scotland. It was founded in 1958 as Greensitt Bros., but control was later assumed by Sir Lawrie Barratt. It was originally based in Newcastle upon Tyne but is now located at David Wilson's former offices in Coalville, Leicestershire. It has been listed on the London Stock Exchange since 1968, and is a constituent of the FTSE 100 Index.

Stephen Peter Morgan is an English businessman, investor, and philanthropist. He is the founder of the housebuilders Redrow plc and the former chairman of Wolverhampton Wanderers F.C. 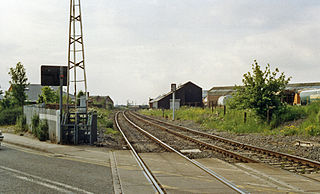 The Leicester–Burton upon Trent line is a freight-only railway line in England linking the Midland Main Line south of Leicester to the Cross Country Route at Burton-on-Trent. The line closed to passengers in the 1960s, since when various proposals have been made to reopen it. 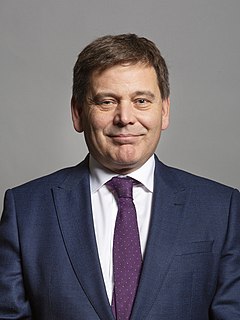 Andrew James Bridgen is a Conservative Party politician and businessman. Since May 2010 he has been the Member of Parliament (MP) for the constituency of North West Leicestershire. A prominent figure on the right of the party, he is a long-term critic of the European Union and supported Brexit in the 2016 United Kingdom European Union membership referendum. He is a vocal supporter of Eurosceptic pressure group Leave Means Leave. He was a prominent critic of Theresa May during her time as leader of the Conservative Party and Prime Minister.

Lawrence Neil Tomlinson is an English businessman and pay driver, who with an estimated fortune of £550 million, who ranks 151st on the 2011 Sunday Times Rich List.

Bloor Homes is an English housebuilder based in Measham, Leicestershire.

Alfie Best is a British Romanichal businessman and philanthropist who is the current chairman of Wyldecrest Parks, a mobile home park company. 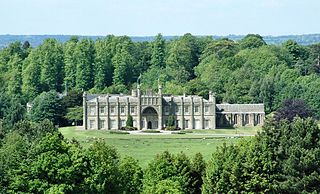 Stuart James Garner is a British businessman, and the owner and CEO of the Norton Motorcycle Company from 2008 until it went into administration in 2020.