Kevin Guy (born December 6, 1972) is an arena football coach and former wide receiver and defensive back who is the head coach for the Arizona Rattlers of the Indoor Football League (IFL). He played his college football at the University of West Alabama, and was an AFL wide receiver and defensive back from 1996 to 1999. He has been a football coach since 2000, and first served as a head coach in 2000 as the interim head coach for the New Jersey Red Dogs. After being the defensive coordinator for the San Jose SaberCats from 2006 to 2007, he became the Rattlers head coach in 2008. In 2018, he and his wife Cathy became two of the co-owners of a new Tucson-based IFL franchise, called the Tucson Sugar Skulls, set to play in 2019. [1]

Born in Birmingham, Alabama, Guy grew up in Alabama then continued his high school career in Shelby County High School in Columbiana, Alabama, where he was a member of the Wildcats football team from 1987 to 1990. [2] Kevin then enrolled at University of West Alabama, and played wide receiver before finishing his career as a defensive back on the West Alabama Tigers football team from 1991 to 1995.

Guy was tested by many high level programs, taking visits to Alabama, Auburn, Mississippi State, Samford and Chattanooga, but only received a scholarship from West Alabama. [3]

The Minnesota Fighting Pike signed Guy after he went unselected in the 1996 NFL Draft. He played four years as a wide receiver and defensive back in the AFL, with Minnesota in 1996, the New Jersey Red Dogs from 1997 to 1999, and the Orlando Predators in 1999. He first became a regular starting defensive back in 1996 with Minnesota. In 1998 with New Jersey, he helped lead the Red Dogs to the AFL Semifinal.

In 2000, while not even being one year removed from the AFL, Guy was a defensive coordinator for the Red Dogs under head coach Frank Mattiace. With four games left in the 2000 season, the Red Dogs fired Mattiace, and Guy served the teams interim head coach for the remainder of the season. In 2001, he returned to the AFL as a defensive coordinator for the Florida Bobcats. He then became a head coach at the af2 level, starting in 2002 with the Tennessee Valley Vipers. After coaching Tennessee to three consecutive playoff berths 2002, 2003 and 2004, he moved to the Rio Grande Valley Dorados, and served as head coach during the 2005 season and led the Dorados to the National Conference Championship game. After the 2005 season, Guy was named the defensive coordinator for the San Jose SaberCats of the AFL. Guy's defensive squad helped lead the SaberCats to back-to-back American Conference Championship Game appearances, and a berth in ArenaBowl XXI, where the SaberCats would defeat the Chicago Rush. Following the SaberCats ArenaBowl victory, the Arizona Rattlers named Guy their 4th head coach in franchise history. Guy led the team to playoff appearances in his first five seasons there, making four consecutive appearances in the ArenaBowl, winning ArenaBowl XXV and ArenaBowl XXVI both over the Philadelphia Soul, and winning ArenaBowl XXVII over the Cleveland Gladiators.

In September 2005, Guy was named the defensive coordinator of the San Jose SaberCats of the AFL. [4]

Guy was named the head coach of the Arizona Rattlers in August 2007. [5]

On September 15, 2020, it was announced Guy would be assuming the role of Arizona Rattlers team president in addition to his head coaching and general manager duties. [6] 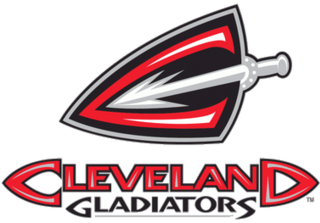 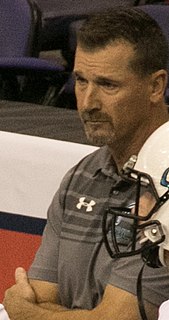 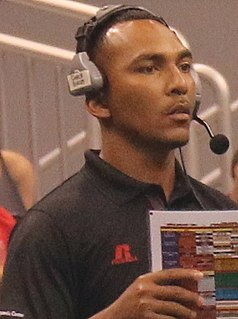 Hernandez James "Hunkie" Cooper is a former American football Wide receiver and linebacker who played for the Arizona Rattlers of the Arena Football League until his retirement in 2005. He is currently the wide receivers coach for the San Diego State Aztecs football team. He is a two time recipient of the Ironman of the Year award and was voted league MVP in 1993. 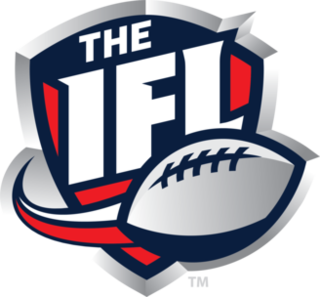 The 2014 Arizona Rattlers season was the 23rd season for the franchise in the Arena Football League, coming off their victory in ArenaBowl XXVI, which was their second consecutive ArenaBowl championship. The team was coached by Kevin Guy and played their home games at the US Airways Center.

Luis Guillermo Vasquez is an American football defensive lineman who is currently a free agent. He played college football at Arizona State University.

Damien Borel is an American football defensive lineman who is currently a free agent. He attended Woodland High School and Butte College. In 2012, while at Butte, he tallied 69 tackles and 19 sacks. Borel's 19 sacks led all California Community College Athletic Association players in 2012.

The Tucson Sugar Skulls are a professional indoor American football team based in Tucson, Arizona. They are members of the Indoor Football League (IFL) since the 2019 season as an expansion team. They play home games at Tucson Convention Center's Tucson Arena. The team are led by owners Cathy Guy, wife of Arizona Rattlers' head coach Kevin Guy, and Ali Farhang. Their head coach is former IFL player Dixie Wooten.