Kyneburga, Kyneswide and Tibba were female members of the Mercian royal family in 7th century England who were venerated as saints.

Kyneburga (d. c. 680) (also called Cyneburh in Old English); the name being also rendered as Kinborough and in occasional use as a Christian name [1] ) and Kyneswide (Cyneswitha) were sisters, the daughters of King Penda of Mercia (who remained true to the Anglo-Saxon religion). She was eldest daughter of Penda. Although her father was an opponent of Christianity, she and all her siblings converted. Bede wrote that Penda tolerated the preaching of Christianity in Mercia itself, despite his own beliefs:

"Nor did King Penda obstruct the preaching of the word among his people, the Mercians, if any were willing to hear it; but, on the contrary, he hated and despised those whom he perceived not to perform the works of faith, when they had once received the faith, saying, They were contemptible and wretched who did not obey their God, in whom they believed.

This was begun two years before the death of King Penda. [2] Their mother was Queen Cyneswise. Tibba is believed to have been a relative.

Kyneburga married Alhfrith of Deira, co-regent of Northumbria (who attended the Synod of Whitby in 664), [3] and later founded an abbey for both monks and nuns in Castor, in the Soke of Peterborough. [4] She became the first abbess and was later joined by Kyneswide and Tibba. Kyneswide succeeded Kyneburga as abbess and she was later succeeded by Tibba. She was buried in her church, but the remains of Kyneburga and Kyneswide were translated, before 972, [5] to Peterborough Abbey, now Peterborough Cathedral.

Kyneburga had been one of the signatories, together with her brother Wulfhere, of the founding charter of Burh Abbey, dated 664, per William Dugdale's Monasticon. [6] (Burh Abbey was later dedicated to St Peter, becoming "Peterborough"). She was much esteemed as a saint by the monks of Peterborough, and features as one of the saints remembered annually on 6 March in several ancient Peterborough-produced Kalendars, [7] (a section of a psalter). [8] [9]

She died on 15 September AD 680 and was buried at Castor where she soon became revered as a saint. In 963 her body was moved to Peterborough, with those of her sister, Cuneswitha, and their kins woman, Tibba. Her remains were transferred to Thorney Abbey some time later. Her feast day is celebrated on 6 March. [10]

She is remembered in a chapel at Peterborough Cathedral, the 12th century St Kyneburga's parish church in Castor, Lady Conyburrow’s Way (a ridge in a field near Castor), Kimberwell spring, Bedfordshire, the villages of Kimberley, Norfolk and West Yorkshire. [11]

There was another lady by the name of Kyneburg, the wife of Oswald of Northumbria. [12]

Tibba, patron saint of falconers, is believed to have lived at Ryhall, Rutland, in the 7th century. She was buried there, but in the 11th century her relics were translated to Peterborough Abbey, by Abbot Ælfsige (1006–1042). [13] [14] According to legend, St Tibba was a niece of King Penda. [15] The remains of a small hermitage associated with the saint can be seen on the west side of the north aisle of Ryhall church.

There was at Ryhall a shrine and a holy well dedicated to Saint Tibba. Robert Charles Hope placed the location on the brow of Tibbal's Hill (Tibb's-well-hill), "upon the hill going from Tolethorpe to Belmsford Bridge". [16]

Tibba had a cousin Eabba, who lived with her. Hope suggests the holy well dedicated to her was just north of Tibba's, on the other side of a ford of the River Gwash and the name "St. Eabba's-well-ford was corrupted to Stableford when a bridge was later built there. St. Eabba's well came to be called by local shepherds "Jacob's well". [16] (For the relationship between St Tibba and St Ebba ("Domne Eafe"), see e.g. Rollason, D.W., The Mildrith Legend A Study in Early Medieval Hagiography in England, Leicester University Press, 1982, p. 77)

Originally buried at Castor and Ryhall, their relics were bought in the 10th century by Peterborough Abbey under the direction of Abbot Aelfsige of Peterborough, as part of a policy of relic acquisition by the abbey. Their relics at the abbey were lost or destroyed in the Reformation. 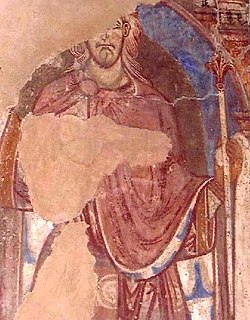 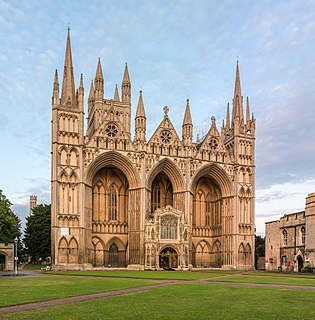 Æthelred was King of Mercia from 675 until 704. He was the son of Penda of Mercia and came to the throne in 675, when his brother, Wulfhere of Mercia, died. Within a year of his accession he invaded Kent, where his armies destroyed the city of Rochester. In 679 he defeated his brother-in-law, Ecgfrith of Northumbria, at the Battle of the Trent: the battle was a major setback for the Northumbrians, and effectively ended their military involvement in English affairs south of the Humber. It also permanently returned the kingdom of Lindsey to Mercia's possession. However, Æthelred was unable to re-establish his predecessors' domination of southern Britain. 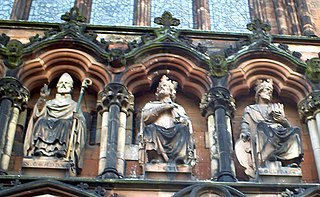 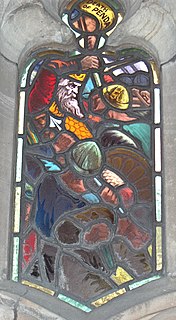 Penda was a 7th-century King of Mercia, the Anglo-Saxon kingdom in what is today the English Midlands. A pagan at a time when Christianity was taking hold in many of the Anglo-Saxon kingdoms, Penda took over the Severn Valley in 628 following the Battle of Cirencester before participating in the defeat of the powerful Northumbrian king Edwin at the Battle of Hatfield Chase in 633.

Eorcenberht of Kent was king of the Anglo-Saxon kingdom of Kent from 640 until his death, succeeding his father Eadbald.

Eadburh of Bicester was an English saint from the 7th century. A daughter of King Penda of Mercia, Edburga was a nun for most of her life.

Rumwold was a medieval infant saint in England, said to have lived for three days in 662. He is said to have been full of Christian piety despite his young age, and able to speak from the moment of his birth, professing his faith, requesting baptism, and delivering a sermon prior to his early death. Several churches were dedicated to him, of which at least four survive.

Ryhall is a village and civil parish in the county of Rutland in the East Midlands of England. It is situated close to the eastern boundary of the county, about 2 miles (3 km) north of Stamford. The parish includes the hamlet of Belmesthorpe. 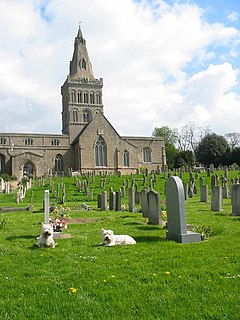 Castor is a village and civil parish in the City of Peterborough unitary authority, about 4 miles (6.4 km) west of the city centre. The parish is part of the former Soke of Peterborough, which was considered part of Northamptonshire until 1888 and then Huntingdonshire from 1965-1974, when it became part of Cambridgeshire.

Seaxburh, also Saint Sexburga of Ely was a Queen as well as an abbess, and is a saint of the Christian Church. She was married to King Eorcenberht of Kent. 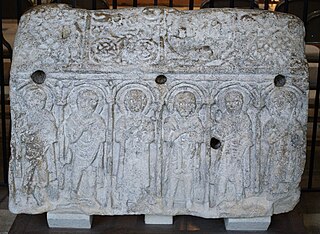 Æthelwold, also known as Æthelwald or Æþelwald, was a 7th-century king of East Anglia, the long-lived Anglo-Saxon kingdom which today includes the English counties of Norfolk and Suffolk. He was a member of the Wuffingas dynasty, which ruled East Anglia from their regio at Rendlesham. The two Anglo-Saxon cemeteries at Sutton Hoo, the monastery at Iken, the East Anglian see at Dommoc and the emerging port of Ipswich were all in the vicinity of Rendlesham.

Saint Mildrith, also Mildthryth, Mildryth or Mildred, was an 8th-century Anglo-Saxon abbess of the Abbey at Minster-in-Thanet, Kent. She was declared a saint after her death, and later her remains were moved to Canterbury.

Sir Thomas Bell the Elder (1486–1566) was a cap manufacturer, mayor of Gloucester, and member of Parliament. He was one of the city's largest employers and wealthiest citizens and a great benefactor of the city and its people. He is described in contemporaneous documents as a "capper". He invested much of his wealth in real estate released on the Dissolution of the Monasteries, sometimes in partnership with Richard Duke, of Otterton, Devon, Clerk of the Court of Augmentations. 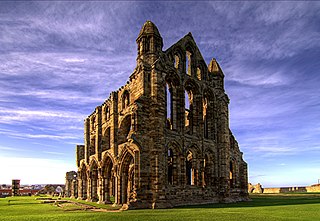 Saint Ælfflæd (654–714) was the daughter of King Oswiu of Northumbria and Eanflæd. She was abbess of Whitby Abbey, an abbey of nuns that were known for their skills in medicine, from the death of her kinswoman Hilda in 680, first jointly with her mother, then alone. Ælfflæd was particularly known for her skills in surgery and her personal attention to patients, as was Hilda, who was known for her personalized medical care. 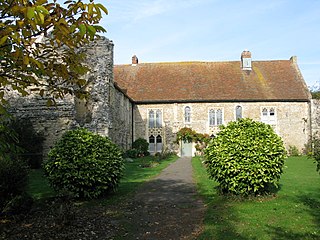 Domne Eafe, also Domneva, Domne Éue, Æbbe, Ebba, was, according to the Kentish royal legend, a granddaughter of King Eadbald of Kent and the foundress of the double monastery at Minster-in-Thanet during the reign of her cousin King Ecgberht of Kent. A 1000-year-old confusion with her sister Eormenburg means she is often now known by that name. Married to Merewalh of Mercia, she had at least four children. When her two brothers, Æthelred and Æthelberht, were murdered she obtained the land in Thanet to build an abbey, from a repentant King Ecgberht. Her three daughters all went on to become Abbesses and saints, the most famous of which, Mildrith, ended up with a shrine in St Augustine's Abbey, Canterbury.