The large skipper (Ochlodes sylvanus) is a butterfly of the family Hesperiidae.

It was long known as Ochlodes venatus , but this is a Far Eastern relative. There is still some dispute whether this species should be considered a distinct species or included in O. venatus as a subspecies. Under ICZN rules the specific name, originally proposed as Papilio sylvanus, is invalid as a homonym (of the butterfly now called Anthene sylvanus ), but it has been conserved by an ICZN commission decision in 2000. [1]

This species occurs from Europe to the East Palearctic realm (northern Asia, China and Japan). In the British Isles it occurs in England, Wales, and south western Scotland. [2] [3] It can be found anywhere where wild grasses are allowed to grow tall. Hedgerows, woodland clearings and edges are favourites.

Ochlodes sylvanus has a wingspan of 28–32 mm, which is similar in size to Chequered skipper. Although called "large" this is still a relatively small butterfly and not much larger than either the small or Essex skippers. The body is rather squat. The antennae are hooked at their tips. The upperside of the wings is orange-brown with a brown border and some lighter spots. The underside of the hindwings is greenish-yellow, marked with sparse yellow spots. The male has a broad scented androconial dark line across the top of the forewings. On the hindwings of the females there are brighter square marks. When the wings are opened, the forewings are obliquely folded, masking the hindwings.

The faint chequered pattern on both the upperside and underside, and also the hook-shaped antenna tips, help to distinguish the large skipper from these two orange skippers. The Lulworth skipper also has patterned wings, but does not have the hooked antennae.

The caterpillar can reach a length of 28 millimetres (1.1 in). It has a large blackish-brown head and a bluish green body, with a dark line down its back and a yellow stripe along each side.

In northern Europe these butterflies have a single brood, but in the south they may have up to three broods.

On hatching the larvae construct a shelter in the usual skipper method of curling a leaf up with silk and begins to feed. It hibernates as a half-grown caterpillar and emerges in the spring to continue feeding and growing.

Pupation lasts about three weeks during May and June and the adults are present from June to August. It is the first of the grass skippers to emerge in the UK. It is an active butterfly in sunny weather, it is attracted to various flowers but has a distinct liking for bramble flowers. 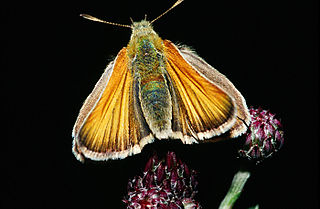 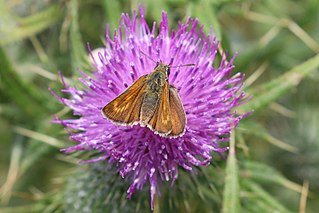 The Adonis blue is a butterfly in the family Lycaenidae. It inhabits the Palearctic realm.

Note that information on this species applies to Western Europe and some details may not be consistent with the species in other parts of its range.

The large chequered skipper is a butterfly of the family Hesperiidae. It is the single member of the monotypic genus Heteropterus. The species can be found in isolated populations in Europe and east across the Palearctic to Central Asia and Korea. It is endangered in the Netherlands. 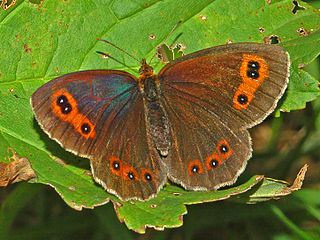 The Scotch argus is a butterfly of the family Nymphalidae. In spite of its English name argus, it is not a close relation of the brown argus nor the northern brown argus.

Udaspes folus, the grass demon, is a small but prominent butterfly found in India & Nepal that belongs to the skippers family, Hesperiidae. It is regarded as an occasional pest of ginger and turmeric.

Taractrocera maevius, the common grass dart, is a butterfly belonging to the family Hesperiidae found in India, Sri Lanka and Myanmar. 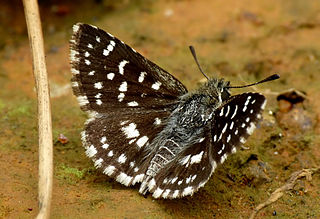 Spialia galba, the Indian grizzled skipper, is a hesperiid butterfly which is found in South Asia and parts of Southeast Asia.

The Zabulon skipper is a North American butterfly first described by the French naturalists Jean Baptiste Boisduval and John Eatton Le Conte from the state of Georgia, United States. 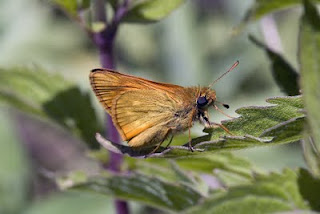 Ochlodes venatus is a skipper butterfly species in the family Hesperiidae. The name was long used for the large skipper of Europe, but it actually refers to its Far Eastern sister species and the large skipper is now called O. sylvanus. There is some dispute however about whether the large skipper should not better placed in O. venatus as a subspecies sylvanus or faunus. An ICZN Opinion in 1944 noted that the genus name Ochlodes is masculine, so the correct epithet for this species is venatus. However, many sources continue to list it as Ochlodes venata.

Dactylis glomerata, also known as cock's-foot, orchard grass, or cat grass (due to its popularity for use with domestic cats) is a common species of grass in the genus Dactylis. It is a cool-season perennial C3 bunchgrass native throughout most of Europe, temperate Asia, and northern Africa.

Atalopedes campestris is a small grass skipper butterfly. It has a wingspan of 35–41 mm. Male is orange, edged with brown, and has a large brown-black stigma. Female is darker with lighter markings in the center of the wing.

Siona lineata, the black-veined moth, is a moth of the family Geometridae. The species was first described by Giovanni Antonio Scopoli in his 1763 Entomologia Carniolica.

Minois dryas, the dryad, is a butterfly of the family Nymphalidae.

Ancyloxypha numitor, the least skipper, is a North American butterfly in the family Hesperiidae. They have a weak, Satyrinae-like flight.

Ochlodes sylvanoides, the woodland skipper, is a butterfly of the family Hesperiidae. It is found in North America from British Columbia south to southern California, east to Montana, Colorado and Arizona.