The Lauritzen Canal is a shipping waterway which is part of the larger Port of Richmond in Richmond, California. [1] It was dredged out of the former expanse of the now atrophied Castro Cove wetlands of the West Richmond Watershed. It was created for shipbuilding yards in World War II. Today is serves as part of the operation of the Port of Richmond for largely petrochemical, liquid bulk, and vehicle imports.

The California Office of Environmental Health Hazard Assessment has issued a "DO NOT EAT" warning for any fish and shellfish caught in the Lauritzen Channel due to elevated levels of dieldrin and DDTs. [2]

The Office of Environmental Health Hazard Assessment, commonly referred to as OEHHA, is a specialized department within the cabinet-level California Environmental Protection Agency (CalEPA) with responsibility for evaluating health risks from environmental chemical contaminants.

El Sobrante Hills is a bedroom community in the city of Richmond, California. This hilly area, located northeast of the main part of Richmond, was annexed by Richmond in the early 1950s, and was developed into residential housing in the late 1950s and early 1960s. It is bordered by the unincorporated area of El Sobrante, California to the north. The two main roads are Valley View Road and May Road, and its primary non-residential feature is De Anza High School.

Atchison is a former settlement in Contra Costa County, California. It was located 1 mile (1.6 km) southeast of Richmond. Its site has now been incorporated by Richmond. The town was most noted as the local headquarters of the Atchison, Topeka, and Santa Fe Railroad, after which it was named. 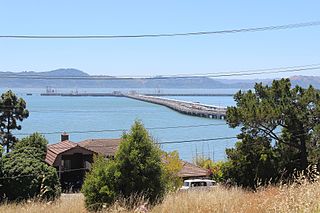 The Richmond Long Wharf is a major tanker terminal and port facility in Richmond, California. 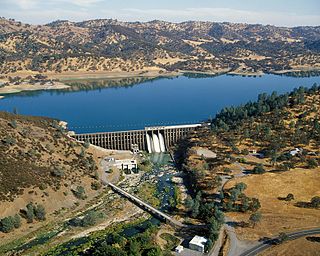 Stony Gorge Dam is a dam in Glenn County, California.