For other ports with similar names see: Port Richmond

The Port of Richmond is a major shipping terminal in California's San Francisco Bay located in the East Bay city and Oakland suburb of Richmond.

The harbor is located in Richmond, California along the city's southern coast beside the Richmond Inner Harbor and boasts the third largest volume of tonnage in the state of California annually; a total of 19 million short tons. It ranks number one for ports of San Francisco Bay in vehicles and liquid bulk. [3] In addition to these the port can also handle dry-bulk, break-bulk, and containers. Seven of the terminals are city owned in addition to 5 dry-docks while there are 11 privately owned terminals from whence 90% of tonnage emerge. The port is served by a sophisticated rail network served by four major rail companies. [4] The port itself has been described as a "boondoggle" and as unprofitable, however in 2012 operations finally broke even; furthermore a net profit was projected over the following decade. [5]

The port was constructed in the 1980s about thirty years after the World War II-era Kaiser Shipyards were decommissioned.

In 1993 the port received 26 million tons of goods. The majority of the cargo was oil and other petroleum products. The port is located at the end of Canal Boulevard in South Richmond. Port Richmond also receives imported cars and delivers them to dealers throughout the San Francisco Bay Area.

The port is a major entry point for vehicles from Asia. [6] The port signed an $US85 million, 15-year deal in 2010 to import Honda vehicles to the city after spending $37 million on upgrades in infrastructure from warehousing to rail lines. [6] In 2011 the city signed a deal to bring in Subaru vehicles on a five-year, $1 million-a-year deal. [6] The port is currently flirting with Toyota and Chinese auto manufacturers to expand its unmet capacity. [6]

In 2012 controversy arose over a $4 million federal grant to build a new safety and operations center. [5] The port authority itself supported redeveloping a decrepit former headquarters while influential councilmember Tom Butt preferred to refurbish the Riggers Loft building, a historic landmark. [5] The port's suggestion allows for a building closer to the day-to-day operations of the port, however the loft option allows for cultural restoration of a World War II relic in addition to providing an opportunity for using excess space to lease as office space for a profit. [5] Councilmember Corky Boozé opposed the loft option stating that Butt was attempting to micromanage the port's affairs and that $500,000 had already been spent on studying the preferred alternative. [5] Butt countered that the port's preference is a terrible idea and that he would support anything else, even if the Riggers Loft is deemed unfit. [5] The Rigger's Loft building was eventually chosen [7]

On December 11, 2011 the tug Tiger sank in the Port of Richmond Harbor. The Tiger was a decommissioned former US Navy tug that served during World War II. In 1944, modifications were made to the Tiger in order to hold more oil. Although it is not known how much the tug Tiger could hold, it is estimated that its maximum capacity was about 78,000 gallons of oil. The Tiger was originally brought to the Port of Richmond in order to be cleaned before heading to be scrapped. [8]

In addition to this, another tug, the Lion, parked near the Tiger has an estimated 15,000 gallons of oil-water that have been collected from the vessel. Though it is unknown if there remain issues with Lion, a protective barrier remains around it.

A group of "55 personal from the Coast Guard, the Department of Fish and Games, the National Response Corporation Environmental Services and Global Salvage and Diving were brought in to work on the site." [8]

Compared to other ports

Compared to other ports; Port of Oakland, Port of Long Beach, and Port of Los Angeles; the Port of Richmond releases a fraction of the pollutants of these other ports. The pollutants being measured are ROG, CO, NOx, PM, SO2, and CO2.

Approved by the Richmond City Council in October 2008, the Honda Port of Entry Project reintroduced Honda back into the Port of Richmond. [10] As a result of this project coming into fruition it seeks to expand and improve the existing automobile import and processing facilities in the Point Potrero Maine Terminal. New rail services and car-carrying ships are being introduced to increase the import and processing of automobiles. This will reduce the number of unnecessary operations in the transportation of cars such as reduced auto trips, improved locomotives, and reduced wasted time for imports. This is a huge milestone in the development of Richmond and the Port of Richmond.

Used during World War II, Shipyard #3 was constructed by Henry J. Kaiser's Firm. This shipyard was constructed as a "permanent shipyard, which is one reason it is still relatively intact." [12]

Today there is a trail that circles the shipyard known "Shipyard #3 Trail", which also share paths with the "Ferry Point Loop". The trail is dotted with seven historical markers that illustrate the shipyard's rich history and role in the development of the Port of Richmond.

According to the Trails of Richmond Action Committee [13] "Shipyard 3 is the only place where WW II ship building facilities remain in the U.S." [14]

The trail is also in view of the S.S. Red Oak Victory and a Whirley Crane. The Whirley Crane was used by the Kaiser Corporations. [13] 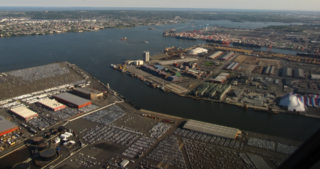 Port Newark–Elizabeth Marine Terminal, a major component of the Port of New York and New Jersey, is the principal container ship facility for goods entering and leaving New York metropolitan area and the northeastern quadrant of North America. Located on Newark Bay, the facility is run by the Port Authority of New York and New Jersey. Its two components—Port Newark and the Elizabeth Marine Terminal —sit side by side within the cities of Newark and Elizabeth, New Jersey, just east of the New Jersey Turnpike and Newark Liberty International Airport. 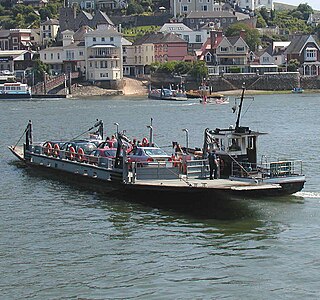 A ferry slip is a specialized docking facility that receives a ferryboat or train ferry. A similar structure called a barge slip receives a barge or car float that is used to carry wheeled vehicles across a body of water.

Rosie the Riveter World War II Home Front National Historical Park is a United States national historical park located in Richmond, California, near San Francisco. The park preserves and interprets the legacy of the United States home front during World War II, including the Kaiser Richmond Shipyards, the Victory ship SS Red Oak Victory, a tank factory, housing developments and other facilities built to support America's entry into World War II. In particular, the role of women and African-Americans in war industries is explored and honored. 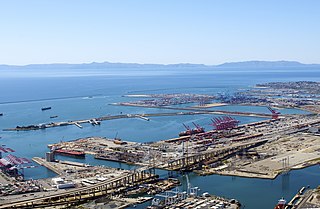 The Port of Mobile is a deep-water port in Mobile, Alabama, United States. It is the only deep-water port in Alabama. It was ranked by the United States Army Corps of Engineers as the 9th largest port by tonnage in the nation during 2014, with a trade volume of 64.3 million tons. This ranking had increased from 12th largest during 2010, with a trade volume of 55,713,273 tons and increase of 19.1%. 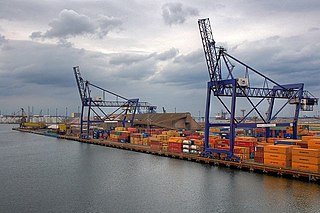 Teesport is a large sea port located in the unitary authority of Redcar and Cleveland, in the ceremonial county of North Yorkshire, Northern England. 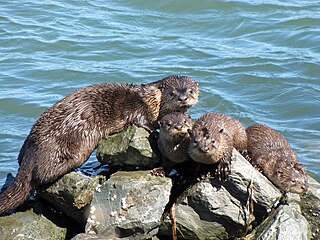 Marina Bay, is located in Richmond's protected Richmond Inner Harbor. It was developed in the mid-1980s in an effort to clean up what had been up to that point the defunct World War II-era Kaiser Shipyards. 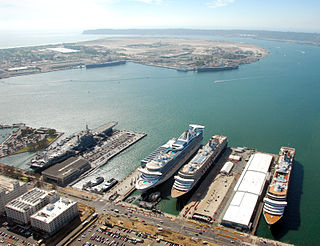 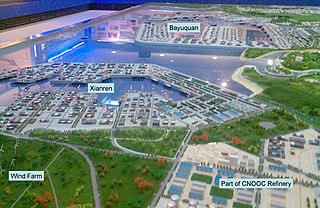 Port Botany is a deepwater seaport located in Botany Bay in Sydney, Australia. The port is dominated by trade in containerised manufactured products and, to a lesser extent, bulk liquid imports including petroleum and natural gas. It is one of Australia's largest container ports and is administered by NSW Ports which entered into a 99-year lease agreement with the NSW Government in May 2013.

The Port of Paulsboro is located on the Delaware River and Mantua Creek in and around Paulsboro, in Gloucester County, New Jersey, United States, approximately 78 miles (126 km) from the Atlantic Ocean. Traditionally one of the nation's busiest for marine transfer operations, notably for crude oil and petroleum products, such as jet fuel and asphalt, it is a port of entry with several facilities within a foreign trade zone.

Sause Bros., Inc., a pioneering Oregon ocean towing company founded in 1936, is a privately held, fourth-generation family company serving routes along the West Coast of the United States, Hawaii and other islands of the South Pacific, as well as Alaska. It maintains a sixty-vessel fleet of tugboats and barges, employing approximately 400 people at its facilities in Coos Bay, Portland, and Rainier, Oregon; in Long Beach, California; and in Honolulu and Kalaeloa, Hawaii.

Webb Dock is a port facility at Fishermans Bend in Melbourne, Victoria constructed progressively from 1960, by dredging and land fill at the mouth of the Yarra River. It includes roll-on/roll-off facilities handling motor vehicle import and export and break bulk commodities and a container terminal. The dock is named after John Percival Webb OBE, a former Melbourne Harbor Trust commissioner.

California during World War II was a major contributor to the World War II effort. California's long Pacific Ocean coastline provided the support needed for the Pacific War. California also supported the war in Europe. After the Japanese attack on Pearl Harbor, Hawaii, on December 7, 1941 most of California's manufacturing was shifted to the war effort. California became a major ship builder and aircraft manufacturer. Existing military installations were enlarged and many new ones were built. California trained many of the troops before their oversea deployment. Over 800,000 Californians served in the United States Armed Forces. California agriculture, ranches and farms were used to feed the troops around the world. California's long coastline also put the state in fear, as an attack on California seemed likely. California was used for the temporary and permanent internment camps for Japanese Americans. The population of California grew significantly, largely due to servicemen who were stationed at the new military bases/training facilities and mass influx of workers from around the U.S. in the growing defense industries. With all the new economy activity, California was lifted out of the great depression. Over 500,000 people moved to California from other states to work in the growing economy. California expanded its oil and mineral production to keep up with the war demand.