The 1971 San Francisco Bay oil spill occurred when two Standard Oil Company of California tankers, the Arizona Standard and the Oregon Standard, collided on January 18, 1971, in the San Francisco Bay. The resulting 800,000 gallon spill, the largest in Bay Area history, threatened sensitive natural habitats both inside and outside the bay, including the Bolinas Lagoon, and contributed to the growth of activism against pollution, after thousands of bay area residents volunteered to clean up beaches and rescue oil soaked birds. A number of environmental organizations had their origins in the spill cleanup. Standard Oil spent more than $1 million in the clean-up. [1] [2] [3] [4]

In March 1971, California's Fish and Game Department estimated that 7,000 birds were oiled during the incident, most of which died prior to collection or while being taken into care. At the end of January 1971, roughly 200 of the 1600 birds "brought in" were still alive. [5] Ultimately less than 80 of those survived. [6]

The resulting environmental destruction from the spill, specifically the avian population, prompted volunteers to rescue some 4,300 birds. At the time, knowledge on how to care for oiled birds was low. Despite best efforts, only 300 or so animals were ever deemed fit to be released. The remnants of this volunteer force eventually resulted in the creation of the International Bird Rescue in an endeavor to increase knowledge and research in bird rescue. [3] One of the largest volunteer turnouts since the 1906 San Francisco earthquake came of this event. [4] 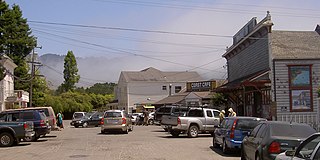 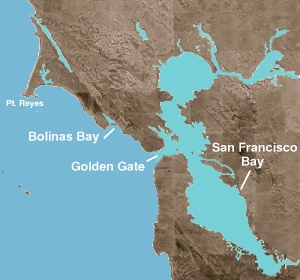 Bolinas Bay is a small bay, approximately 5 miles (8 km) long, on the Pacific coast of California in the United States. It is in Marin County, north of the Golden Gate, approximately 15 miles (25 km) northwest of San Francisco. The town of Bolinas is at its shore.

The MV Sea Empress was a single-hull Suezmax oil tanker that ran aground at the entrance to the Milford Haven harbour on the southwest coast of Wales in February 1996. The ensuing oil spill, Britain's third largest oil spillage and the 12th largest in the world at the time, devastated a considerable area of local coastline and killed many birds, and continued to affect the Pembrokeshire coast for years afterwards.

Audubon Canyon Ranch (ACR), is a 501(c)(3) not-for-profit environmental conservation and education organization headquartered in Stinson Beach, Marin County, California on the eastern shore of Bolinas Lagoon. The lands upon which ACR operates are within the ancestral territories of the Coast Miwok, Southern Pomo and Wappo peoples. ACR recognizes that Indigenous communities are very much alive today and striving to protect and maintain relationships with cultural and natural resources on ACR lands; they acknowledge that Indigenous lands are occupied by them and others. 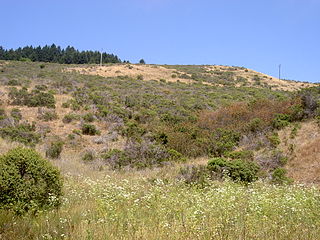 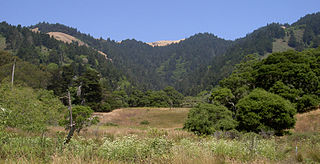 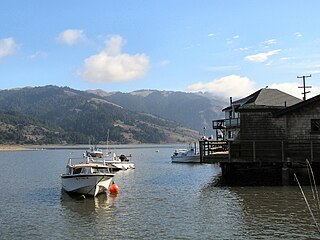 The Cosco Busan oil spill occurred at 08:30 UTC-8 on 7 November 2007 between San Francisco and Oakland, California, in which 53,569 US gal (202,780 L) of IFO-380 heavy fuel oil, sometimes referred to as "bunker fuel", spilled into San Francisco Bay after the container ship Cosco Busan, operated by Fleet Management Limited struck Delta Tower of the San Francisco–Oakland Bay Bridge in thick fog.

MV Jessica was an oil tanker that was involved in an oil spill in the Galápagos Islands, a chain of islands 972 km (525 nmi) west of continental Ecuador, of which they are a part. The ship was registered in Ecuador and owned by Acotramar. On the evening of 16 January 2001, Jessica ran aground at Wreck Bay, at the entrance to the port of Puerto Baquerizo Moreno, the capital of the Galápagos Province, located on the southwestern coast of San Cristóbal Island. The ship was carrying 600 tons of diesel oil and 300 tons of intermediate fuel oil. The diesel was destined for the fuel dispatch station on Baltra Island, while the fuel oil was destined for the tourist vessel Galapagos Explorer.

Aramburu Island (ah-ram-boo-ru) is a 17-acre (6.9 ha) island in Richardson Bay, Marin County, California. It, along with Strawberry Spit, came to exist in the 1950s and 1960s as a consequence of dumping dredged material from nearby developments into the bay. In the 1980s, the northern part of the landmass was cut off from Strawberry Spit on the directions of a Marin County supervisor to prevent housing from being constructed there, creating Aramburu Island. While natural erosion processes caused it to shrink slowly over the course of subsequent decades, a 2010s restoration effort added large amounts of material to prevent further erosion, and turned it into "sustainable bird habitat".