Earthquakes are relatively frequent occurrences in Guatemala. [1] The country lies in a major fault zone known as the Motagua and Chixoy-Polochic fault complex, which cuts across Guatemala and forms the tectonic boundary between the Caribbean plate and the North American plate. In addition, along Guatemala's western coast line, the Cocos plate pushes against the Caribbean plate, forming a subduction zone known as the Middle America Trench located approximately 50 km off Guatemala's Pacific coast. This subduction zone led to the formation of the Central America Volcanic Arc, and is an important source of offshore earthquakes. [2] Both these major tectonic processes have generated deformations within the Caribbean plate and produced secondary fault zones, like the Mixco, Jalpatagua, and Santa Catarina Pinula faults. [3]

The most destructive earthquake in recent Guatemalan history was the 1976 quake with a magnitude of 7.5 Mw and a hypocenter depth of just 5 km. This shallow-focus earthquake, originating from the Motagua Fault, caused 23,000 fatalities, leaving 76,000 injured and causing widespread material damage. Surprisingly, the 7.9 Mw earthquake of 1942, though higher in magnitude, was much less destructive, in part because of its substantially deeper hypocenter depth of 60 km. [4]

A number of earthquakes with low magnitudes caused major damage in very localized areas, which may in part be explained by their relatively shallow depth. This was the case with the 1985 Uspantán earthquake of 5.0 Mw with a depth of 5 km, which destroyed most buildings in the town of Uspantán, but caused little or no damage in the rest of the country. [5]

Guatemala is in constant earthquake activity. However, there are some earthquakes that are more notable due to the damage they've caused. Notable earthquakes in recent Guatemalan history include the following: [4]

An earthquake is the shaking of the surface of the Earth resulting from a sudden release of energy in the Earth's lithosphere that creates seismic waves. Earthquakes can range in size from those that are so weak that they cannot be felt to those violent enough to propel objects into the air, and wreak destruction across entire cities. The seismicity, or seismic activity, of an area is the frequency, type, and size of earthquakes experienced over a period of time. The word tremor is also used for non-earthquake seismic rumbling.

Megathrust earthquakes occur at subduction zones at destructive convergent plate boundaries, where one tectonic plate is forced underneath another, caused by slip along the thrust fault that forms the contact between them. These interplate earthquakes are the planet's most powerful, with moment magnitudes (Mw) that can exceed 9.0. Since 1900, all earthquakes of magnitude 9.0 or greater have been megathrust earthquakes. No other type of tectonic activity of terrestrial origin has produced earthquakes of this scale.

The Motagua Fault is a major, active left lateral-moving transform fault which cuts across Guatemala, continuing offshore along the southern Pacific coast of Mexico, returning onshore along the southernmost tip of Oaxaca, then continuing offshore until it merges with the Middle America Trench near Acapulco. It forms part of the tectonic boundary between the North American Plate and the Caribbean Plate. It is considered the onshore continuation of the Swan Islands Transform Fault which runs under the Caribbean Sea. 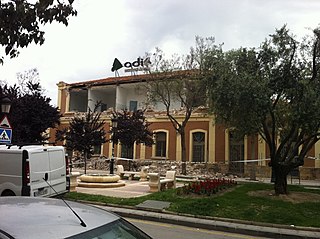 This is a list of different types of earthquake.

A deep-focus earthquake in seismology is an earthquake with a hypocenter depth exceeding 300 km. They occur almost exclusively at convergent boundaries in association with subducted oceanic lithosphere. They occur along a dipping tabular zone beneath the subduction zone known as the Wadati–Benioff zone.

The 1816 Guatemala earthquake occurred at 15:30 UTC on 22 July. It had an estimated magnitude of 7.5 to 7.75 on the Mw and a maximum perceived intensity of IX (Violent) on the Mercalli intensity scale. It was caused by movement on the Chixoy-Polochic Fault. The area affected by shaking up to intensity VII (Very strong) was at least 13,000 km2. At least 23 deaths were reported. The discovery of this earthquake 175 years after it occurred was based on study of historical documents, and is notable for showing that this portion of Guatemala, previously believed by many planners to be of low seismic risk, has experienced, and is at further risk of, very large earthquakes.