Before the enactment of the Act, the House approved a Standing Order stating that the remaining hereditary peers shall consist of: [1]

The total number and sub-composition set out above reflects a compromise to ensure passage of the Act through the House reached between then-Prime Minister Tony Blair and the leader of the opposition Conservatives in the Lords, Viscount Cranborne (known since his father's death in 2003 as the Marquess of Salisbury), a descendant of the last Prime Minister to sit in the Lords throughout the entirety of their premiership. The number elected by each group reflected the relative strengths of the parties among hereditary peers at that time. Historically, the Conservatives had predominated in the House since 1890; it was this entrenched position which led to the removal of the absolute power of veto from the House of Lords by the Parliament Act 1911 and was the chief catalyst for the removal of most peers in 1999.[ citation needed ] The House of Lords Act 1999 reduced the proportion of Conservative peers in the House from 41% (in April 1999) to 33% (in June 2000), and the proportion of hereditary peers in the House from 59% to 13%. [2]

The fifteen peers elected by the whole house were intended to provide a group of experienced members ready to serve as Deputy Speakers or other officers.

The initial elections [3] took place before the House of Lords Act took effect;[ dubious – discuss ] therefore all hereditary peers could vote in those elections. From the end of the 1998–1999 session of parliament until the following session, vacancies (usually triggered by death) were to be filled by runners up in the initial elections. Two Crossbench peers, Lord Cobbold and Lord Chorley, returned to the House this way, having sat before 1999. Since then, vacancies among the group of 15 peers have been filled through by-elections, with all members of the House entitled to vote. The Procedure Committee has recommended that any peer elected at a by-election in this category should not be expected to serve as a Deputy Speaker. [4] In by-elections to fill vacancies in the political groups, only hereditary peers of that group sitting in the House may vote.

As of November 2022, there are 4 dukes, 25 earls, 15 viscounts, 45 barons and 2 Lords of Parliament among the 91 hereditary peers entitled to sit in the House of Lords. After the death of Queen Elizabeth II in 2022, the Marquess of Cholmondeley’s service as Lord Great Chamberlain came to an end; his successor was Lord Carrington, who was already an elected hereditary peer. No by-election to fill a 92nd place for hereditary peers has been called.

Only those with titles in the Peerages of England, Scotland, Great Britain and the United Kingdom are currently eligible for a seat. Peers in the Peerage of Ireland are only eligible if they hold a title in one of the other peerages, but if elected, they may use their Irish peerage whilst in the Lords; for instance, the present Earl of Arran, whose highest title is an Irish one, is entitled to a seat as Lord Sudley, his subsidiary title in the UK peerage, but sits using his highest, Irish, title.

Elected by the whole House

Elected by the Conservative hereditary peers

Pursuant to section 2 of House of Lords Reform Act 2014

Elected by the Crossbencher hereditary peers

Pursuant to section 2 of House of Lords Reform Act 2014

Elected by the Labour hereditary peers 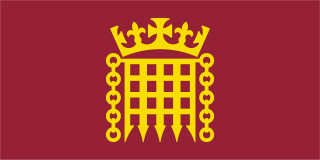 The House of Lords, also known as the House of Peers, is the upper house of the Parliament of the United Kingdom. Membership is by appointment, heredity or official function. Like the House of Commons, it meets in the Palace of Westminster in London, England.

The Peerage of Scotland is one of the five divisions of peerages in the United Kingdom and for those peers created by the King of Scots before 1707. Following that year's Treaty of Union, the Kingdom of Scots and the Kingdom of England were combined under the name of Great Britain, and a new Peerage of Great Britain was introduced in which subsequent titles were created.

Nicholas Le Poer Trench, 9th Earl of Clancarty, 8th Marquess of Heusden, is an Anglo-Irish peer, as well as a nobleman in the Dutch nobility. Lord Clancarty serves as an elected Crossbench hereditary peer in the British House of Lords. His earldom is in the Peerage of Ireland. He was educated at Westminster School. He also studied at Ashford Grammar School, Plymouth Polytechnic, University of Colorado, Denver, USA, and Sheffield University.

John Richard Boyle, 15th Earl of Cork and 15th Earl of Orrery is a British hereditary peer and a member of the House of Lords, where he sits as a Crossbencher. Boyle was an officer in the Royal Navy and then had a career in the sugar industry before inheriting his titles in 2003.