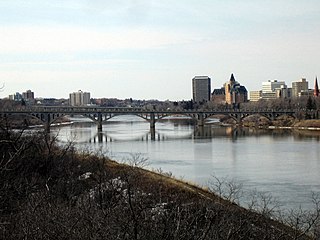 The South Saskatchewan River is a major river in Canada that flows through the provinces of Alberta and Saskatchewan. 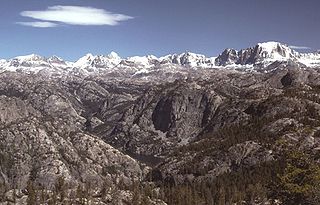 Bear Creek or Bearcreek may refer to:

The Gros Ventre, also known as the Aaniiih, A'aninin, Haaninin, Atsina, and White Clay are a historically Algonquian-speaking Native American tribe located in north central Montana. Today the Gros Ventre people are enrolled in the Fort Belknap Indian Community of the Fort Belknap Reservation of Montana, a federally recognized tribe with 3,682 enrolled members, that also includes Assiniboine people or Nakoda people, the Gros Ventre's historical enemies. The Fort Belknap Indian Reservation is in the northernmost part of Montana, just south of the small town of Harlem, Montana.

Triple Divide Peak is located in the Lewis Range, part of the Rocky Mountains in North America. The peak is a feature of Glacier National Park in the state of Montana in the United States. The summit of the peak, the hydrological apex of the North American continent, is the point where two of the principal continental divides in North America converge, the Continental Divide of the Americas and the Northern or Laurentian Divide. 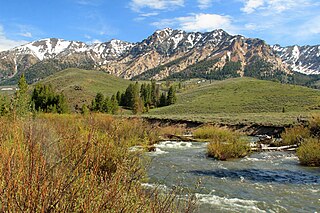 The Big Wood River is a 137-mile-long (220 km) river in central Idaho, United States, that is a tributary of the Malad River.

The Montana valley and foothill grasslands are an ecoregion of northwestern North America in the northern United States and southern Canada.