Nemmara is a town in Palakkad district, Kerala, India. [1] It is administrated by the Nemmara Grama Panchayat. Nemmara is the entry point to the Nelliampathi hills, which are located at the foothills of Western Ghats.

The festival is held in the Nellikulangara Bhagavathy Temple, and runs from 3-16 April each year. It involves friendly rivalry between the villages of Nemmara and Vallangi, as they try to outcompete each other in artistic ceremonies such as Kummattikali, Karivela and a parade of caparisoned elephants. [3]

Vela or Velas may refer to:

Vallangi is a village in the Palakkad district of Kerala, South India. It forms a part of the Nemmara gram panchayat.

Kizhakkancherry is a gram panchayat in the Palakkad district, state of Kerala, India. It is a local government organisation that serves the villages of Kizhakkencheri-I and Kizhakkencheri-II. It was formed in the year of 1951 and is the fourth largest grama panchayath in Kerala. It covers an area of 112.56 km2 and comprises 22 wards. The boundaries are Vadakkencherry (north), Pananjeri (south), Vandazhy (east) and Kannambra (west). The village is located 37.4 km from the city of Palakkad and 34.9 km from Thrissur.

Tattamangalam Kuthira Vela or Angadi Vela is a festival conducted in a small village called Tathamangalam in the Palakkad District of Kerala, south India. Kuthira means "horse" and Vela means "festival" in the Malayalam language. During the festival, a grant horse race is conducted by the local people. The riders are from the neighbouring state of Tamil Nadu.

Karivela is a festival in which many volunteers paint in black with charcoal and walk through the streets, this festival is conducted as part of other festivals, like Nemmara Vela, Kuthira Vela etc. These men usually controls the people who come to watch the festival. Kari Vela is usually seen in Palakkad District of Kerala, south India.

Manapullikavu is a Hindu temple dedicated to Mother Goddess, situated in Palakkad city, Kerala, India. Manapullikavu Vela is an annual festival that takes place in the temple. It is organised by 8 sets of commities or deshams. Elephants and fireworks are the highlights of the festival.

Padur is a village in Palakkad District, Kerala. There is a temple of Sree Panickanar where a yearly festival called Padur Vela is celebrated, which is the curtain raiser for Vela-Poorams in Palakkad.

Ayiloor, also known as Ayilur, Aylur, or Ayalur, is a village in the Chittur Thaluk of Palakkad district, state of Kerala, India. Ayiloor is located about 30 kilometers away from Palakkad town and 48 kilometers from Thrissur town.

Thiruvazhiyad is a village in Palakkad district in the state of Kerala, India. It forms a part of the Ayiloor gram panchayat.

Elanad is a small town in Thrissur district in the state of Kerala, India.

Killimangalam is a village in Chelakkara, Thrissur district in the state of Kerala, India. Killimangalam and the nearby village of panjal has been the location for several Malayalam movies. Vaazhalikkavu temple, which is situated on the banks of nila/bharathapuzha, has been one of these cinematic locations. The Killimangalam Farmers Cooperative Bank is banking cooperative in the area. Centres in the village, other than Killimangalam, include Uduvadi and Chiramgonam. The Killimangalam Angadikkavu Vela is the festival of the village. Three temples - killimangalam angadikkavu temple, thekkumuri parappatta shiva temple and Kizhakkumuri keezhillam - are the participants of the vela maholtsavam which comes in the month of February or March.

Manalithara is a village in Thrissur district in the state of Kerala, India. It is Situated at Thekkumkara Gramapachayath.

Aathanad is a mountain situated in Vallanghy, Nemmara, Palakkad district, Kerala. It is famous for the Ayyappa Temple in the top of the mountain. The annual festival held here on Malayalam month Dhanu 9 or. People from different places will come here to hire this mountain to get blessed. Nellikulangara Temple is situated in the valley of this Aathanad, where the famous Vallanghy-Nenmara Vela is celebrating every year. From the top of the Aathanadu mountain we will get a great view of the Vallanghy, Nemmara towns, Pothundi Dam, Nelliyampathy hills and the green carpet of paddy fields which makes Palakkad the Granary of Kerala. The mountain hiring gives a good experience.

Nemmara is a gram panchayat in the Palakkad district, state of Kerala, India. It is the local government organisation that serves the villages of Nemmara and Vallanghy. It is also an intermediate panchayat, subordinate to the Palakkad zilla panchayat. 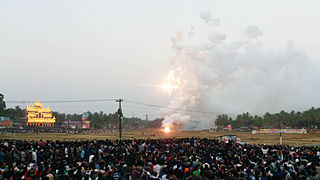 The Nenmara Vallanghy Vela or Nenmara Vela is one of the most popular annual festival of Kerala celebrated at Nellikulangara Bhagavathy temple in Nenmara, Palakkad district.

Palakkad district has a large number of temples, churches, mosques and other tourist attractions. Palakkad district is situated in the middle of Kerala state in South India. The nearest airports are at Coimbatore in Tamil Nadu and Cochin in Kerala.

Wikimedia Commons has media related to Nemmara .
This page is based on this Wikipedia article
Text is available under the CC BY-SA 4.0 license; additional terms may apply.
Images, videos and audio are available under their respective licenses.