Last updated May 01, 2022
English phrase used especially in Australia
For other uses, see No worries (disambiguation).

No worries is an expression seen in English meaning "do not worry about that", "that's all right", "forget about it" or "sure thing". It is similar to the US English " no problem ". The phrase is widely used in Australian speech and represents a feeling of friendliness, good humour, optimism and "mateship" in Australian culture. The phrase has been referred to as the national motto of Australia.

The phrase has influenced a similar phrase used in the Tok Pisin language in Papua New Guinea. Its usage became more common in British English after increased usage in Australian soap operas that aired on television in the United Kingdom. Linguistics experts are uncertain how the phrase became utilized in American English; theories include use by Steve Irwin on the television program The Crocodile Hunter and usage by the United States media during the 2000 Sydney Olympics. It has also gained common usage into Canadian English. [1] [2]

No worries is an Australian English expression, meaning "do not worry about that", [3] or "that's all right". [4] It can also mean "sure thing" [5] and "you're welcome". [6] Other colloquial Australian terms which mean the same thing include "she'll be right". [7] The expression has been compared to the American English equivalent "no problem". [8] In their book Australian Language & Culture: No Worries!, authors Vanessa Battersby, Paul Smitz and Barry Blake note: "No worries is a popular Australian response akin to 'no problems', 'that's OK' or 'sure thing'." [9]

Early documentation dates the phrase back to 1966. [10] According to author of When Cultures Collide: Leading Across Cultures, Richard D. Lewis, the phrase is a form of expression of the relaxed attitude in Australian culture. [11] Anna Wierzbicka comments that the expression illustrates important parts of Australian culture, including: "amiability, friendliness, an expectation of shared attitudes (a proneness to easy 'mateship'), jocular toughness, good humour, and, above all, casual optimism". [12] She concludes that along with "good on you", the expressions reflect the "national character" and "prevailing ethos" of Australia. [13]

Wierzbicka writes in her book Cross-cultural Pragmatics that the expression "permeates Australian speech", "serves a wide range of illocutionary forces" and displays a "casual optimism". [14] In her 1992 book Semantics, Culture, and Cognition, Wierzbicka classifies the phrase as "among the most characteristic Australian expressions", along with "good on you". [12]

The term can also be used in the context of an apology. [15] The phrase has been used widely in British English since the late 1980s, a development partly attributed to the success of Australian soap operas such as Neighbours in the United Kingdom. [16]

The phrase "no wucking forries" has the same meaning in Australia; as a spoonerism of "no fucking worries", [3] [17] and is contracted to the phrases "no wuckers" and "no wucks". [3]

No worries was referred to as "the national motto" of Australia in 1978, [12] and in their 2006 work, Diving the World, Beth and Shaun Tierney call "no worries, mate" the national motto of the country. [6] Writing in The New York Times Book Review , Annette Kobak calls the expression a "ritual incantation" which has "particular charm". [18] The phrase "no waris" in the Papua New Guinea language Tok Pisin is derived from the Australian English term. [19] [20]

According to The Sunday Mail a 2004 newspaper report notes that no worries has begun to be used in American English. [21] Writing in a 2004 article for The Advertiser , Samela Harris comments: "The Americans have no idea of the etymology of 'no worries'. So, while they may cheerily adopt our 'no worries' mantra, 'no worries' will never catch on as an attitude." [22] According to Tom Dalzell, author of two books on slang usage in the United States, linguistics experts are not certain how the expression became popular in that country. One possibility not mentioned in the source is the prominent position of this phrase in the lyrics of song "Hakuna Matata" in the popular 1994 Disney film The Lion King . [23] Usage of the term by Steve Irwin on The Crocodile Hunter , as well as attempts by members of the American press to imitate the expression during the 2000 Sydney Olympics, have been put forth as theories explaining the pervasiveness of the expression in the United States. [23] Linguistics professor Kate Burridge writes in her 2004 book Weeds in the Garden of Words that expressions including "no worries", "absolutely", and "bottom line" have become less prevalent in favor of newer sayings. [24]

Semantics is the study of reference, meaning, or truth. The term can be used to refer to subfields of several distinct disciplines, including philosophy, linguistics and computer science.

Colloquialism or colloquial language is the linguistic style used for casual (informal) communication. It is the most common functional style of speech, the idiom normally employed in conversation and other informal contexts. Colloquialism is characterized by wide usage of interjections and other expressive devices; it makes use of non-specialist terminology, and has a rapidly changing lexicon. It can also be distinguished by its usage of formulations with incomplete logical and syntactic ordering. 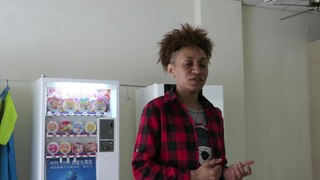 Tok Pisin, often referred to by English speakers as "New Guinea Pidgin" or simply "Pidgin", is a creole language spoken throughout Papua New Guinea. It is an official language of Papua New Guinea and the most widely used language in the country. However, in parts of the southern provinces of Western, Gulf, Central, Oro, and Milne Bay, the use of Tok Pisin has a shorter history and is less universal, especially among older people.

Anna Wierzbicka[ˈanna vʲɛʐˈbʲitska] is a Polish linguist who is Emeritus Professor at the Australian National University, Canberra. Brought up in Poland, she graduated from Warsaw University and emigrated to Australia in 1972, where she has lived since. With over twenty published books, many of which have been translated into foreign languages, she is a prolific writer.

The natural semantic metalanguage (NSM) is a linguistic theory that reduces lexicons down to a set of semantic primitives. It is based on the conception of Polish professor Andrzej Bogusławski. The theory was formally developed by Anna Wierzbicka at Warsaw University and later at the Australian National University in the early 1970s, and Cliff Goddard at Australia's Griffith University.

Yo is a slang interjection, commonly associated with North American English. It was popularized by the Italian-American community in Philadelphia, Pennsylvania, in the 1940s.

Ethnolinguistics is an area of anthropological linguistics that studies the relationship between a language and the nonlinguistic cultural behavior of the people who speak that language.

Bugger or buggar can at times be considered as a mild swear word. In the United Kingdom the term has been used commonly to imply dissatisfaction, refer to someone or something whose behaviour is in some way inconvenient or perhaps as an expression of surprise. In the United States, particularly in the Midwest and South, it is an inoffensive slang term meaning "small animal".

Conceptual semantics is a framework for semantic analysis developed mainly by Ray Jackendoff in 1976. Its aim is to provide a characterization of the conceptual elements by which a person understands words and sentences, and thus to provide an explanatory semantic representation. Explanatory in this sense refers to the ability of a given linguistic theory to describe how a component of language is acquired by a child.

A pillion is a secondary pad, cushion, or seat behind the main seat or saddle on a horse, motorcycle, bicycle or moped. A passenger in this seat is said to "ride pillion". The word is derived from the Scottish Gaelic for "little rug", pillean, from the Latin pellis, "animal skin". One or more pelts often were used as a secondary seat on horseback; the usage has carried over to motorcycles.

Australian Aboriginal English is a dialect of English used by a large section of the Indigenous Australian population. It is made up of a number of varieties which developed differently in different parts of Australia, and grammar and pronunciation differs from standard Australian English, along a continuum. Some words have also been adopted into standard or slang Australian English.

Unserdeutsch, or Rabaul Creole German, is a German-based creole language that originated in Papua New Guinea as a lingua franca. The substrate language is assumed to be Tok Pisin, while the majority of the lexicon is from German.

Waris or Walsa is a Papuan language of northern New Guinea.

Cliff Goddard is a professor of linguistics at Griffith University, Queensland, Australia. He is, with Anna Wierzbicka, a leading proponent of the Natural Semantic Metalanguage approach to linguistic analysis. Goddard's research has explored cognitive and cultural aspects of everyday language and language use, and he is considered a leading scholar in the fields of semantics, and cross-cultural pragmatics. His work spans English,, indigenous Australian languages, and South East Asian languages.

Semantic primes or semantic primitives are a set of semantic concepts that are argued to be innately understood by all people but impossible to express in simpler terms. They represent words or phrases that are learned through practice but cannot be defined concretely. For example, although the meaning of "touching" is readily understood, a dictionary might define "touch" as "to make contact" and "contact" as "touching", providing no information if neither of these words is understood. The concept of universal semantic primes was largely introduced by Anna Wierzbicka's book, Semantics: Primes and Universals.