Last updated September 18, 2022
Judgment, viewpoint, or statement that is not conclusive
For other uses, see Opinion (disambiguation).

An opinion is a judgment, viewpoint, or statement that is not conclusive, rather than facts, which are true statements.

A given opinion may deal with subjective matters in which there is no conclusive finding, or it may deal with facts which are sought to be disputed by the logical fallacy that one is entitled to their opinions.

Distinguishing fact from opinion is that facts are verifiable, i.e. can be agreed to by the consensus of experts. An example is: "United States of America was involved in the Vietnam War," versus "United States of America was right to get involved in the Vietnam War". An opinion may be supported by facts and principles, in which case it becomes an argument.

Different people may draw opposing conclusions (opinions) even if they agree on the same set of facts. Opinions rarely change without new arguments being presented. It can be reasoned that one opinion is better supported by the facts than another, by analyzing the supporting arguments. [1]

In casual use, the term opinion may be the result of a person's perspective, understanding, particular feelings, beliefs, and desires.

Though not hard fact, collective opinions or professional opinions are defined as meeting a higher standard to substantiate the opinion.

In contemporary usage, public opinion is the aggregate of individual attitudes or beliefs held by a population (e.g., a city, state, or country), while consumer opinion is the similar aggregate collected as part of marketing research (e.g., opinions of users of a particular product or service). Typically, because the process of gathering opinions from all individuals is difficult, expensive, or impossible to obtain, public opinion (or consumer opinion) is estimated using survey sampling (e.g., with a representative sample of a population).

In some social sciences, especially political science and psychology, group opinion refers to the aggregation of opinions collected from a group of subjects, such as members of a jury, legislature, committee, or other collective decision-making body. In these situations, researchers are often interested in questions related to social choice, conformity, and group polarization.

"Scientific opinion" may reflect opinions on scientific concerns as articulated by one or more scientists, published in scholarly journals or respected textbooks, both of which entail peer-review and rigorous professional editing. It may also refer to opinions published by professional, academic, or governmental organizations about scientific findings and their possible implications.

Scientific literacy, also called public understanding of science, is an educational goal [3] concerned with providing the public with the necessary tools to benefit from scientific opinion.

A "legal opinion" or "closing opinion" is a type of professional opinion, usually contained in a formal legal-opinion letter, given by an attorney to a client or a third party. Most legal opinions are given in connection with business transactions. The opinion expresses the attorney's professional judgment regarding the legal aspect of the transaction. The opinion can be "clean" or "reasoned". [4] A legal opinion is not a guarantee that a court will reach any particular result. [5] However, a mistaken or incomplete legal opinion may be grounds for a professional malpractice claim against the attorney, pursuant to which the attorney may be required to pay the claimant damages incurred as a result of relying on the faulty opinion.

A "judicial opinion" or "opinion of the court" is an opinion of a judge or group of judges that accompanies and explains an order or ruling in a controversy before the court. A judicial opinion generally lays out the facts that the court recognized as being established, the legal principles the court is bound by, and the application of the relevant principles to the recognized facts. The goal is to demonstrate the rationale the court used in reaching its decision. [6]

Look up opinion in Wiktionary, the free dictionary.

Wikiquote has quotations related to Opinion .

Controversy is a state of prolonged public dispute or debate, usually concerning a matter of conflicting opinion or point of view. The word was coined from the Latin controversia, as a composite of controversus – "turned in an opposite direction".

A slippery slope argument (SSA), in logic, critical thinking, political rhetoric, and caselaw, is an argument in which a party asserts that a relatively small first step leads to a chain of related events culminating in some significant effect. The core of the slippery slope argument is that a specific decision under debate is likely to result in unintended consequences. The strength of such an argument depends on whether the small step really is likely to lead to the effect. This is quantified in terms of what is known as the warrant. This type of argument is sometimes used as a form of fearmongering in which the probable consequences of a given action are exaggerated in an attempt to scare the audience. However, differentiation is necessary, since, in other cases, it might be demonstrable that the small step is likely to lead to an effect.

A precedent is a principle or rule established in a previous legal case that is either binding on or persuasive without going to courts for a court or other tribunal when deciding subsequent cases with similar issues or facts. Common-law legal systems place great value on deciding cases according to consistent principled rules, so that similar facts will yield similar and predictable outcomes, and observance of precedent is the mechanism by which that goal is attained. The principle by which judges are bound to precedents is known as stare decisis. Common-law precedent is a third kind of law, on equal footing with statutory law and subordinate legislation in UK parlance – or regulatory law.

A fallacy is the use of invalid or otherwise faulty reasoning, or "wrong moves," in the construction of an argument, which may appear stronger than it really is if the fallacy is not spotted. The term was in the Western intellectual tradition introduced in the Aristotelian De Sophisticis Elenchis.

A fact is a datum about one or more aspects of a circumstance, which, if accepted as true and proven true, allows a logical conclusion to be reached on a true/false evaluation. Standard reference works are often used to check facts. Scientific facts are verified by repeatable careful observation or measurement by experiments or other means.

Dissent is an opinion, philosophy or sentiment of non-agreement or opposition to a prevailing idea or policy enforced under the authority of a government, political party or other entity or individual. A dissenting person may be referred to as a dissenter.

The genetic fallacy is a fallacy of irrelevance in which arguments or information are dismissed or validated based solely on their source of origin rather than their content. In other words, a claim is ignored or given credibility based on its source rather than the claim itself.

Anecdotal evidence is evidence based only on personal observation, collected in a casual or non-systematic manner. The term is sometimes used in a legal context to describe certain kinds of testimony which are uncorroborated by objective, independent evidence such as notarized documentation, photographs, audio-visual recordings, etc.

Obiter dictum is a Latin phrase meaning "other things said", that is, a remark in a legal opinion that is "said in passing" by any judge or arbitrator. It is a concept derived from English common law, whereby a judgment comprises only two elements: ratio decidendi and obiter dicta. For the purposes of judicial precedent, ratio decidendi is binding, whereas obiter dicta are persuasive only. 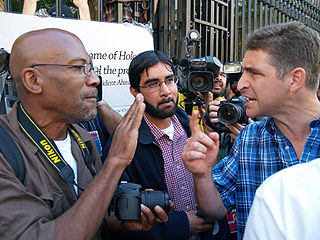 Argumentation theory, or argumentation, is the interdisciplinary study of how conclusions can be supported or undermined by premises through logical reasoning. With historical origins in logic, dialectic, and rhetoric, argumentation theory, includes the arts and sciences of civil debate, dialogue, conversation, and persuasion. It studies rules of inference, logic, and procedural rules in both artificial and real-world settings.

Daubert v. Merrell Dow Pharmaceuticals, Inc., 509 U.S. 579 (1993), is a United States Supreme Court case determining the standard for admitting expert testimony in federal courts. In Daubert, the Court held that the enactment of the Federal Rules of Evidence implicitly overturned the Frye standard; the standard that the Court articulated is referred to as the Daubert standard.

Ratio decidendi is a Latin phrase meaning "the reason" or "the rationale for the decision". The ratio decidendi is "the point in a case that determines the judgement" or "the principle that the case establishes".

The legal process school was a movement within American law that attempted to chart a third way between legal formalism and legal realism. Drawing its name from Hart & Sacks' textbook The Legal Process, it is associated with scholars such as Herbert Wechsler, Henry Hart, Albert Sacks and Lon Fuller, and their students such as John Hart Ely and Alexander Bickel. The school grew in the 1950s and 1960s. To this day, the school's influence remains broad.

In argumentation theory, an argumentum ad populum is a fallacious argument which is based on claiming a truth or affirming something is good because the majority thinks so.

Socioscientific Issues (SSI) are controversial social issues which relate to science. They are ill-structured, open-ended problems which have multiple solutions.

An argument from authority, also called an appeal to authority, or argumentum ad verecundiam, is a form of argument in which the opinion of an authority on a topic is used as evidence to support an argument. Some consider that it is used in a cogent form if all sides of a discussion agree on the reliability of the authority in the given context, and others consider it to always be a fallacy to cite the views of an authority on the discussed topic as a means of supporting an argument.