Orbitz.com is a travel fare aggregator website and travel metasearch engine. The website is owned by Orbitz Worldwide, Inc., a subsidiary of Expedia Group. It is headquartered in the Citigroup Center, Chicago, Illinois. [2]

Originally established through a partnership of major airlines, and subsequently owned by various entities, Orbitz.com – the flagship brand of Orbitz Worldwide – has been in operation since 2001. Other Orbitz Worldwide online travel companies include CheapTickets in the Americas; ebookers in Europe; and HotelClub and RatestoGo, based in Sydney. Orbitz Worldwide also owns and operates Orbitz for Business, a corporate travel company.[ original research? ]

Orbitz was the airline industry's response to the rise of online travel agencies such as Expedia and Travelocity, as well as a solution[ buzzword ] to lower airline distribution costs. Continental Airlines, Delta Air Lines, Northwest Airlines, and United Airlines, subsequently joined by American Airlines, invested a combined $145 million to start the project in November 1999. It was code-named T2, some claimed meaning "Travelocity Terminator", but adopted the brand name Orbitz when it commenced corporate operations as DUNC, LLC (the initials of its first four founding airlines) in February 2000. The company began beta testing early the next year, and Orbitz.com officially launched in June 2001. [3] [1]

Before, during, and two years after launching the site, the company faced antitrust criticism since its creators controlled 75% of U.S. air travel. The United States Department of Transportation saw no antitrust issues with the launch of the Orbitz website. The United States Department of Justice ruled in 2003 that Orbitz was not a cartel and that there was no evidence of price fixing. [4]

Nielsen's Net rating division that the launch of the Orbitz website in June 2001 was the biggest e-commerce launch ever to that date. [5]

In 2006, The Blackstone Group acquired Travelport, the travel distribution services business of Cendant, for $4.3 billion in cash. At the time, Travelport included the Orbitz travel reservation website used by consumers, the Galileo computer reservations system used by airlines and thousands of travel agents, Gulliver's Travels and Associates wholesale travel business, and other travel related software brands and solutions.[ buzzword ] [9]

Travelport announced in May 2007 that it had filed a registration statement with the U.S. Securities and Exchange Commission to sell a portion of Orbitz Worldwide in an initial public offering (IPO). Travelport said it planned to use a portion of the proceeds to pay down its debt. Trading began on July 20, 2007, and the IPO transaction closed on July 25, 2007. Travelport owned approximately 48 percent of Orbitz Worldwide following the IPO. [10]

In February 2015, Expedia announced that it would acquire Orbitz for $1.2 billion in cash, to better compete with Priceline.com. The deal was announced a few days after Expedia agreed to purchase Travelocity. [11] [12]

Orbitz runs on a mixed Red Hat Linux [13] and Solaris based platform and was an early adopter of Sun Microsystems' Jini [14] platform in a clustered Java environment. JBoss is used as application servers within their environment, along with various other proprietary and open source software. [15] Orbitz licenses ITA Software's Lisp-powered QPX software to power their site. Orbitz Worldwide brands have been migrated to a common technology platform, which enables the same platform to service multiple travel brands in multiple languages in different markets and currencies as well. Orbitz has released parts of its Complex event processing infrastructure as Open Source. [16]

Southwest Airlines filed a lawsuit against Orbitz for trademark infringement and false advertising in May 2001. Southwest, which had opposed the project from the outset,[ clarification needed ] claimed Orbitz misrepresented its prices and used its trademarks without permission. In July, it withdrew its fares from Airline Tariff Publishing Company, the entity that distributes fare information to Orbitz and others, and dropped its case against Orbitz. Southwest went on to remove themselves from every other online outlet except their own. In June 2008, Orbitz For Business became one of the first Online Travel Agents to offer Southwest flights on the Orbitz For Business website. [17]

In July 2009, CNET revealed that Orbitz, along with other popular consumer websites Buy.com and Fandango, have been routinely giving post-transaction marketers access to their customers' credit cards. The Senate Commerce Committee investigating these companies has described their services as a "scam". [18] The scam works by charging a monthly fee (many users report a $12 charge from Reservation Rewards or Webloyalty showing up on their credit card statements) that is piggybacked[ clarification needed ] with the Orbitz sale (as it stands, Orbitz Terms of Service agreement currently allows them to share customers' credit card information with third parties for their own uses). Orbitz claims to have ended its affiliation with the controversial marketer, and further claims not to share consumer credit card information with third parties any more.[ citation needed ]

In 2009, the state of New Jersey filed a lawsuit against the company alleging violation of their Consumer Fraud Act surrounding events with a Bruce Springsteen concert, where tickets were allegedly offered for sale on their website which did not actually exist. The court in Milgram v. Orbitz granted summary judgment for Orbitz, finding that Section 230 of the Communications Decency Act preempted the state law consumer fraud claims. [19]

In December 2010, American Airlines temporarily ceased offering fares through Orbitz following pressure from American to convince Orbitz to use its AA Direct Connect electronic transaction system. [20] AA tried to establish that Direct Connect would have full control over the distribution of its products and reduce GDS segment fees. Furthermore, Direct Connect enables AA to sell ancillary services to its customers. [21] American was later ordered by an Illinois Court to resume offering fares and flight schedules. [22] The court order came only days after American released a video jabbing Orbitz on YouTube. [23]

Media Matters runs a website called DropFox.com, aiming to get advertisers to boycott Fox News. Orbitz initially referred to Media Matters' efforts as a "smear campaign", [24] but agreed, on June 9, 2011, following a three-week campaign by prominent LGBT organizations, to "review the policies and process used to evaluate where advertising is placed". [25]

In 2014, Orbitz and United Airlines initiated a federal lawsuit against 22-year-old Skiplagged founder Aktarer Zaman. [26] [27] [28] The complaint alleges that Zaman "intentionally and maliciously" interfered with airline industry business relationships "by promoting prohibited forms of travel" which violate the common carrier contract with passengers. [29] The complaint is centered on airline policies against hidden city tickets. Although the hidden-city practice itself is not illegal, [30] the complaint alleged that Zaman's website is disruptive to their business. The lawsuit was dismissed. [31] [32]

Cendant Corporation was an American provider of business and consumer services, primarily within the real estate and travel industries. In 2005 and 2006, it broke up and spun off or sold its constituent businesses. Although it was based in New York City, the majority of its headquarters employees were in Parsippany-Troy Hills, New Jersey.

Worldspan is a provider of travel technology and content and a part of the Travelport GDS business. It offers worldwide electronic distribution of travel information, Internet products and connectivity, and e-commerce capabilities for travel agencies, travel service providers and corporations. Its primary system is commonly known as a Global Distribution System (GDS), which is used by travel agents and travel related websites to book airline tickets, hotel rooms, rental cars, tour packages and associated products. Worldspan also hosts IT services and product solutions for major airlines.

Sabre Global Distribution System, owned by Sabre Corporation, is a travel reservation system used by travel agents and companies to search, price, book, and ticket travel services provided by airlines, hotels, car rental companies, rail providers and tour operators. Originally developed by American Airlines with the assistance of IBM in 1960, the booking service became available for use by external travel agents in 1976 and became independent of the airline in March 2000.

Sabre Corporation is a travel technology company based in Southlake, Texas. It is the largest global distribution systems provider for air bookings in North America. American Airlines founded the company in 1960, and it was spun off in 2000.

Hotwire is a travel website that offers airline tickets, hotel rooms, rental cars, and vacation packages. It operates by selling off unsold travel inventory at discounted prices. The company is headquartered in San Francisco, CA, Hotwire, Inc. is an operating company of the Expedia Group, which also operates the website ClassicVacations, Expedia, Hotels.com, Orbitz, Travelocity and Egencia.

The Airline Tariff Publishing Company is a privately held corporation that engages in the collection and distribution of fare and fare-related data for the airline and travel industry. ATPCO currently works with more than 400 airlines worldwide, and it supplies more than 99% of the industry’s intermediated fare data to all the major airfare pricing engines, storing over 306 million active fares in its database and managing an average of 14.5 million fare changes each day.

CheapTickets is an online travel services company focusing on the leisure market, offering airline tickets, hotel and vacation rentals, rental cars, customized vacation packages, and cruises. CheapTickets was a wholly owned subsidiary of Orbitz Worldwide, Inc., and with Expedia Inc.'s purchase of Orbitz, it is now a subsidiary of Expedia Group.

Travelport Worldwide Ltd provides distribution, technology, payment solutions for the travel and tourism industry. It is the smallest, by revenue, of the top three global distribution systems (GDS) after Amadeus IT Group and Sabre Corporation.

One Equity Partners is a private equity firm with over $10 billion in assets under management which primarily deals with the industrial, healthcare and technology sectors in North America and Europe. One Equity Partners was the merchant banking arm of JPMorgan Chase, focused on leveraged buyout and growth capital investments in middle-market companies. Formed by Bank One in 2001, the group has offices in New York City, Chicago, Sao Paulo, Vienna, Hong Kong and Frankfurt. In 2014, it was announced that J.P Morgan was to sell off half of its stake in One Equity Partners. 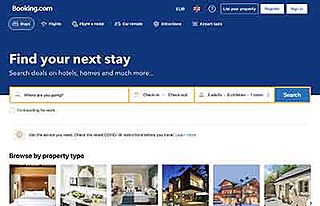 Booking.com is a Dutch online travel agency for lodging reservations & other travel products, and a subsidiary of Booking Holdings. It is headquartered in Amsterdam.

Post-transaction marketing is a deceptive marketing practice used by many companies, which have then been subject to investigation, charges from state attorneys general, and class action lawsuits.

Skiplagged.com is an online travel agency and metasearch engine for booking flights and hotels. It popularized the tactic of hidden city ticketing.