The Second Battle of Benghazi was a battle in the Libyan Civil War between army units and militiamen loyal to Libyan leader Muammar Gaddafi, and anti-Gaddafi forces in Benghazi. [12] The battle marked the start of a United Nations-mandated military intervention in the conflict, with fighter jets from the French Air Force attacking and destroying several pro-Gaddafi units, forcing them to retreat. [13]

On 18 March, Gaddafi's forces bypassed Ajdabiya by using the coastal roads instead of the roads directly linked with Ajdabiya, avoiding the need to capture Ajdabiya to proceed. By night the loyalist troops had positioned themselves within kilometres of Benghazi's two southern entry points, the western southern gate being called the west gate.

Initial assault on the city

At 7:30 am local time on 19 March, Gaddafi's forces began artillery shelling the city. At around 9:00 am local time they entered the city from west and south with tanks. [14] Rebel armoured units engaged the initial loyalist armoured column at around 10:00 am [15] Twelve T-72 tanks spearheaded the main thrust into the city, and by 10:30 am, it seemed the Benghazi was in danger of falling to Pro Gaddafi forces. A rebel tank, aging and rusted, opened fire on the lead pro Gaddafi tank, damaging it and forced its occupants to abandon the vehicle. The tanks behind the lead vehicle all began a withdrawal from the area, under rebel fire, and retreated apparently to the city limits.[ citation needed ]

By 2:30 pm local time the opposition fighters had repelled the first wave of loyalist forces out of the city. During the daytime battles, a rebel MiG-23 crashed to the ground in the outskirts of Benghazi. [16] The pilot, Colonel Mohammed Mbarak al-Okaili, [16] remained in the plane until moments before the crash before ejecting but was reported not to have survived the crash. [17] The cause of the crash was unclear, but may have been a catastrophic engine failure or friendly fire from rebel air-defences that had mistaken it for a loyalist plane. [18] This prompted rebels to use loudspeakers, mainly from mosques, urging not to "attack the planes – these are ours". [19]

At around 4:00 pm local time, French fighter jets entered Libyan airspace and flew over Benghazi, conducting aerial reconnaissance missions and preparing to intervene. [14] Then, at 4:45 pm, coalition intervention began as a French fighter jet fired on and destroyed several loyalist armored vehicles. [14] Later, Al Jazeera reported that French fighter jets had destroyed at least four of the regime's force's tanks; however, this was not confirmed by France. [20]

On the morning of the next day, air attacks were conducted against a loyalist tank column from 4:00 am for two hours. It was confirmed by a Reuters reporter that at least seven tanks and two armored personnel carriers were destroyed in the French air strikes. [11] [21]

Admiral Mullen of the United States announced on 20 March, that the international coalition had stopped the regime's progression on Benghazi. [13]

The Battle of Misrata, also known as the Siege of Misrata, was a battle of the 2011 Libyan Civil War for the control of Misrata. It was fought between troops loyal to the government of Muammar Gaddafi, and anti-Gaddafi rebels who held Misrata, the third largest city in Libya. Following the initial stages of the uprising, the Libyan government took back most towns in the west of the country, leaving Misrata the only major city under rebel control in Tripolitania. The city soon became the site of one of the war's major battles and the suffering of its citizens gained worldwide attention.

The Libyan Civil War began on 17 February 2011 as a civil protest and later evolved into a widespread uprising. By mid-August, anti-Gaddafi forces effectively supported by a NATO-led international coalition were ascendant in Tripolitania, breaking out of the restive Nafusa Mountains in the south to mount an offensive toward the coast and advancing from Misrata on loyalist-held cities and villages from the north and east.

The National Liberation Army, formerly known as the Free Libyan Army, was a Libyan military organisation affiliated with the National Transitional Council, which was constituted during the Libyan Civil War by defected military members and civilian volunteers, in order to engage in battle against both remaining members of the Libyan Armed Forces and paramilitia loyal to the rule of Muammar Gaddafi. It had prepared for some time in portions of Eastern Libya controlled by the anti-Gaddafi forces for eventual full-on combat in Western Libya against pro-Gaddafi militants, training many men before beginning to go on the offensive. They have battled for control of Benghazi, Misrata, Brega, Ajdabiya, Zawiya and Ra's Lanuf as well as several towns in the Nafusa Mountains. They finally began the Battle for Tripoli in August 2011 when they attacked from the west of the city, as well as fomenting an internal uprising on 20 August.

Estimates of deaths in the Libyan Civil War vary with figures from 2,500 to 25,000 given between March 2 and October 2, 2011. An exact figure is hard to ascertain, partly due to a media clamp-down by the Libyan government. Some conservative estimates have been released. Some of the killing "may amount to crimes against humanity" according to the United Nations Security Council and as of March 2011, is under investigation by the International Criminal Court. 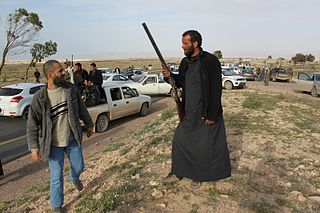 The First Battle of Brega was fought during the Libyan Civil War. It began when pro-Gaddafi government troops attacked the city, held by the National Transitional Council, in the early hours of 2 March 2011.

The Battle of Ra's Lanuf was a two-phase battle in 2011 during the Libyan Civil War between forces loyal to Libyan leader Muammar Gaddafi and those loyal to the National Transitional Council. Both forces sought control of the town of Ra's Lanuf. The first phase followed two days after the First Battle of Brega which occurred in the town Brega, roughly 130 kilometres (81 mi) to the east of Ra's Lanuf. After conquering the town on 4 March, the rebels pushed further west to attack Sirte but they were driven back by government forces and on 11 March, government troops reconquered most of Ra's Lanuf.

The Second Battle of Brega was a battle during the Libyan Civil War. More than 10 days earlier, anti-Gaddafi forces beat back an attempt by loyalist forces to take the town on 2 March 2011, in the First Battle of Brega. Following that battle, rebel forces advanced along the Libyan Coastal Highway, taking the towns of Ra's Lanuf and Bin Jawad. However, after the Battle of Bin Jawad and the Battle of Ra's Lanuf, government troops retook all of the territory lost and were once again threatening Brega by mid-March.

The Free Libyan Air Force was the air force of the National Transitional Council, a collection of defected Loyalist Military personnel and captured aircraft that aligned themselves with the anti-Gaddafi forces in the Libyan Civil War.

The Third Battle of Brega was a battle during the Libyan Civil War between government forces and anti-Gaddafi forces for control of the town of Brega and its surroundings. 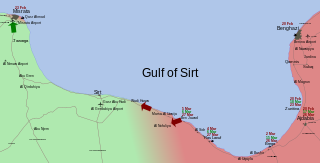 The First Gulf of Sidra offensive was the second major rebel offensive of the Libyan Civil War. It was mounted by anti-Gaddafi forces immediately after their victory in the Battle of Ajdabiya. The offensive was meant to have the rebel forces quickly reach Gaddafi's hometown of Sirte.

The Battle of Brega–Ajdabiya road was a battle during the Libyan Civil War between forces loyal to Libyan leader Muammar Gaddafi and anti-Gaddafi forces for control of the towns of Brega and Ajdabiya respectively and the Libyan Coastal Highway between them.

The Battle of Ajdabiya was an armed battle in and near the city of Ajdabiya that took place as part of the Libyan Civil War. It was fought between anti-government rebels and military forces loyal to the Libyan leader Muammar Gaddafi. Following the Second Battle of Brega, in which pro-Gaddafi forces captured the town, Ajdabiya was the only major rebel-held city left en route to the rebel capital of Benghazi. The battle for Ajdabiya had been cited as a potential turning point in the conflict on which the fate of the whole rebellion against the Gaddafi government may be decided. On 26 March 2011, Libyan rebels, backed by extensive allied air raids, seized control of the frontline oil town of Ajdabiya from Colonel Muammar Gaddafi's forces. During the first phase of the battle, pro-Gaddafi forces seized the strategic road junction leading to Benghazi and Tobruk, and captured most of the city. The city centre remained in rebel hands, but was surrounded by pro-government forces and cut off from outside assistance. After the second phase, anti-Gaddafi forces recaptured the road junction and cleared loyalist forces from the city, sending them retreating down the Libyan Coastal Highway towards Sirte. 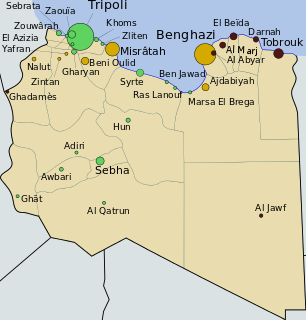 The Libyan Civil War began on 15 February 2011 as a chain of civil protests and later evolved into a widespread uprising against the regime of Muammar Gaddafi. On 25 February, most of eastern Libya was reported to be under the control of protesters and rebel forces. Gaddafi remained in control of the cities of Tripoli, Sirte and Sabha. By 15 March, however, Gaddafi's forces had retaken more than half a dozen lost cities. Except for most of Cyrenaica and a few Tripolitania cities the majority of cities had returned to Gaddafi government control.

The First Battle of Zawiya or Zawia was a battle during the Libyan Civil War between army units and militiamen loyal to Muammar Gaddafi and anti-Gaddafi forces for control of the city of Zawia.

The Libyan Civil War began on 15 February 2011 as a civil protest and later evolved into a widespread uprising. However, by 19 March, Libyan forces under Colonel Muammar Gaddafi were on the brink of a decisive victory over rebels in Libya's east. That day, leading NATO members acted on United Nations Security Council Resolution 1973 which authorized member states "to take all necessary measures... to protect civilians and civilian populated areas under threat of attack in the Libyan Arab Jamahiriya, including Benghazi, while excluding an occupation force". 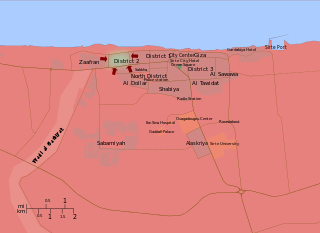 The Battle of Sirte was the final battle of the First Libyan Civil War, beginning when the National Liberation Army attacked the last remnants of the Libyan army still loyal to Muammar Gaddafi in his hometown and designated capital of Sirte, on the Gulf of Sidra. As of September 2011, Sirte and Bani Walid were the last strongholds of Gaddafi loyalists and the National Transitional Council hoped that the fall of Sirte would bring the war to an end. The battle and its aftermath marked the final collapse of the four-decade Gaddafi regime. Both Gaddafi and his son, Mutassim, were wounded and captured, and tortured and killed in custody less than an hour later. The month-long battle left Sirte almost completely in ruins, with many buildings damaged or totally destroyed.