Sharknose is also the nickname of the Ferrari 156 F1

Sharknose is a term applied by railfans to the styling of several cab unit diesel locomotives built by the Baldwin Locomotive Works to the specifications of the Pennsylvania Railroad. The styling was by the PRR's preferred designer, Raymond Loewy, with the distinctive nose reminiscent of his design for the PRR T1 steam locomotive.

Locomotives commonly known as "sharknoses" include:

While the passenger models were unique to the Pennsylvania Railroad, other railroads purchased and operated the freight models, including the New York Central, Baltimore and Ohio and Elgin, Joliet & Eastern. The New York Central was the last original owner to operate the engines, selling the last of them to the Monogahela Railway for $6,000 each in late 1967. By 1972, all but two of them, the 1205 and 1216, had been scrapped. The final pair also were sold for scrap in 1974, but were rescued from the torch by the Delaware and Hudson Railroad, which at the time was also operating the world's last four Alco PA-1 passenger locomotives. The pair were purchased by Castolite Corp. in 1978, which leased them for use on the Michigan Northern. Both engines have purportedly been stored out of public view on the property of the Escanaba and Lake Superior Railroad for more than 20 years.[ citation needed ]

The name "sharknose" has also been given to streamlined automobiles of the 1930s and 1940s, because of their design, first introduced in 1936 on the 1937 Willys passenger cars. Willys continued to manufacture them in this design until the beginning of World War II. The term was applied to the 1938 Graham-Paige "Spirit of Motion." The design was also used on the 1941 Nash, as well as 1940s Hudson models. The last automobile with this design was the 1947 Hudson.

Many classic BMWs from the 1960s to the 1980s were also designed with a pronounced nose that is commonly referred to as a shark nose. [1] 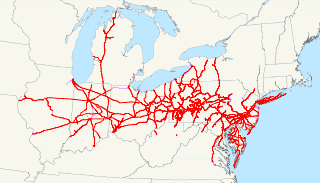 The Baldwin Locomotive Works (BLW) was an American manufacturer of railroad locomotives from 1825 to 1956. Originally located in Philadelphia, it moved to nearby Eddystone, Pennsylvania, in the early 20th century. The company was for decades the world's largest producer of steam locomotives, but struggled to compete as demand switched to diesel locomotives. Baldwin produced the last of its 70,000-plus locomotives in 1956 and went out of business in 1972.

The Baldwin DR-12-8-1500/2 was the Baldwin Locomotive Works' first serious attempt at a production road diesel locomotive. The Baldwin type designation was 'DR-12-8-1500/2,' meaning Diesel Road locomotive, with 12 axles, and two engines of 1,500 horsepower (1,100 kW) each. The trucks were configured in a 2-D+D-2 wheel arrangement. The nickname came from the numerous axles set in a nearly unbroken line, much like the legs of a centipede.

The Pennsylvania Railroad's K4s 4-6-2 "Pacific" was their premier passenger-hauling steam locomotive from 1914 through the end of steam on the PRR in 1957. 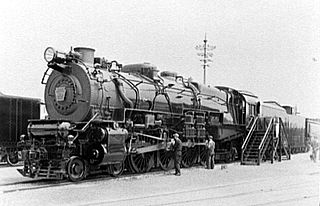 The M1 was a class of steam locomotive of the Pennsylvania Railroad (PRR). It was a class of heavy mixed-traffic locomotives of the 4-8-2 "Mountain" arrangement, which uses four pairs of driving wheels with a four-wheel guiding truck in front for stability at speed and a two-wheel trailing truck to support the large firebox needed for sustained power. Although built for both passenger and freight work, they spent most of their service lives hauling heavy high-speed freight trains. Many PRR men counted the M1 class locomotives as the best steam locomotives the railroad ever owned.

The Pennsylvania Railroad's 52 T1 class duplex-drive 4-4-4-4 steam locomotives, introduced in 1942 and 1945-1946, were the last steam locomotives built for the PRR and arguably its most controversial. They were ambitious, technologically sophisticated, powerful, fast and distinctively streamlined by Raymond Loewy. However, they were also prone to wheelslip both when starting and at speed, complicated to maintain and expensive to run. The PRR decided in 1948 to place diesel locomotives on all express passenger trains, leaving unanswered questions as to whether the T1's flaws were solvable, especially taking into account that the two prototypes did not have the problems inherent to the production unit. An article appearing in a 2008 issue of the Pennsylvania Railroad Technical and Historical Society Magazine showed that inadequate training for engineers transitioning to the T1 may have led to excessive throttle applications, resulting in driver slippage. Another root cause of wheelslip was faulty "spring equalization": The stiffnesses of the springs supporting the locomotive over the axles were not adjusted to properly equalize the wheel-to-track forces. The drivers were equalized together but not equalized with the engine truck. In the production fleet the PRR equalized the engine truck with the front engine and the trailing truck with the rear engine, which helped to solve the wheelslip problem.

The Pennsylvania Railroad's class S2 was a steam turbine locomotive designed and built in a collaborative effort by Baldwin Locomotive Works and Westinghouse Electric & Manufacturing Company, as an attempt to prolong the dominance of the steam locomotive by adapting technology that had been widely accepted in the marine industry. One was built, #6200, delivered in September 1944. The S2 was the sole example of the 6-8-6 wheel arrangement in the Whyte notation, with a six-wheel leading truck, eight driving wheels, and a six-wheel trailing truck. The S2 used a direct-drive steam turbine provided by the Westinghouse Electric & Manufacturing Company, geared to the center pair of axles with the outer two axles connected by side rods; the fixed gear ratio was 18.5:1. Such design was to prevent energy loss and S2 achieved a mechanical efficiency of 97% which means only 3% of steam energy was lost within the propulsion equipment. The disadvantage of direct-drive steam turbine was that the turbine could not operate at optimal speeds over the locomotive's entire speed range. The S2 was the largest, heaviest and fastest direct-drive turbine locomotive design ever built.

The Pennsylvania-Reading Seashore Lines was a railroad that operated in southern New Jersey in the 20th century. It was created in 1933 as a joint consolidation venture between two competing railroads in the region.

The Baldwin DR-4-4-15 was a 1,500-horsepower (1,100 kW) cab unit-type diesel locomotive built for freight service by the Baldwin Locomotive Works between November 1947 and June 1950. It was produced in two different body types, nicknamed the "Babyface" and "Sharknose" styles by railfans, though Baldwin used the same model number for both. 22 "Babyface" cab-equipped A units were built, along with 11 cabless booster B units; 36 "Sharknose" A units and 36 B units were constructed, making a total for all models of 105 locomotives built. 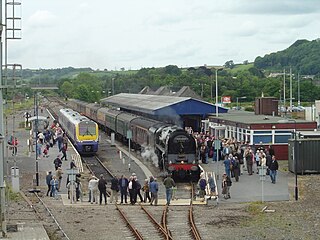 Dieselisation or dieselization is the conversion to diesel fuel in vehicles, as opposed to gasoline or steam engines, particularly in reference to the replacement of steam locomotives by diesel locomotives from the 1930s to the 1960s. 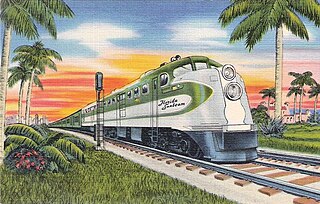 The ALCO DL-109 was one of six models of A1A-A1A Diesel locomotives built to haul passenger trains by the American Locomotive Company (ALCO) between December, 1939 and April, 1945. They were of a cab unit design, and both cab-equipped lead A units DL-103b, DL-105, DL-107, DL-109 and cabless booster B units DL-108, DL-110 models were built. The units were styled by noted industrial designer Otto Kuhler, who incorporated into his characteristic cab the trademark three-piece windshield design. A total of 74 cab units and four cabless booster units were built.

The PRR E44 was an electric, rectifier-equipped locomotive built by General Electric for the Pennsylvania Railroad between 1960 and 1963. The PRR used them for freight service on the Northeast Corridor. They continued in service under Penn Central and Conrail until Conrail abandoned its electric operations in the early 1980s. They were then acquired by Amtrak and NJ Transit, where they lived short lives; all were retired by the mid-1980s. One is preserved at the Railroad Museum of Pennsylvania.

The Baldwin RF-16 was a 1,600-horsepower (1,200 kW) cab unit-type diesel locomotive built for freight service by the Baldwin Locomotive Works between 1950 and 1953. All RF-16s were configured with a B-B wheel arrangement and ran on two AAR Type B two-axle road trucks, with all axles powered. A total of 109 cab-equipped A units were built, along with 51 cabless booster B units, for a total of 160 locomotives built. As was the case with most passenger locomotives of its day, the RF-16s came equipped with a retractable, nose-mounted drop coupler pilot. Unlike competing units from EMD and Alco, the RF-16 used an air-powered throttle, meaning that it could not be run in MU operation with EMD or Alco diesels without special MU equipment.

The Tuckerton Railroad was a railroad that operated in New Jersey from 1871 to 1936. The Southern New Jersey Railroad operated part of the line from 1937 to 1940.

The Pennsylvania Railroad G5s was a class of 4-6-0 steam locomotives built by the PRR's Juniata Shops in the mid-late 1920s. It was designed for passenger trains, particularly on commuter lines, and became a fixture on suburban railroads until the mid-1950s. The G5s was the largest and most powerful 4-6-0 locomotive, except for a single Southern Pacific 4-6-0 that outweighed it by 5500 lb. 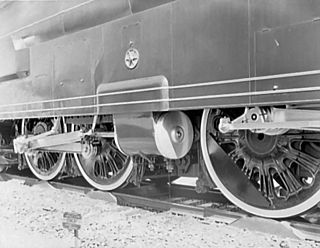 A duplex locomotive is a steam locomotive that divides the driving force on its wheels by using two pairs of cylinders rigidly mounted to a single locomotive frame; it is not an articulated locomotive. The concept was first used in France in 1863, but was particularly developed in the early 1930s by the Baldwin Locomotive Works, the largest commercial builder of steam locomotives in North America, under the supervision of its then chief engineer, Ralph P. Johnson.