In 1781, Great Britain declared war on the Dutch Republic, opening the Fourth Anglo-Dutch War. As part of its offensive strategy, the British organized an expedition against Dutch colonial outposts on the Gold Coast of Africa (present-day Ghana). Captain Thomas Shirley led the expedition, commanding HMS Leander and several transports carrying two small regiments of independently raised troops under the command of Captain Kenneth Mackenzie of the 78th Foot. [1]

The expedition sailed late in 1781, and arrived off the coast of Africa in January 1782. Pursuant to orders, Shirley first stopped at the primary British outpost of Cape Coast Castle on 5 February, where plans were developed to take the principal Dutch castle at Elmina by land while Leander made a diversionary attack on the nearby St. Jago castle. The expedition arrived at Elmina on 15 February, but high surf prevented the 500 troops from landing until 18 February, and contrary winds prevented Leander from coming close enough to shore to bring its guns to bear on the forts until 20 February. On that day, Shirley raised the agreed signal flag indicating the beginning of his attack, and opened fire on St. Jago shortly after noon. The ship and the fort exchanged fire until dark, and resumed again the next morning, when the land attack on the Elmina Castle began. Fire from both Elmina and St. Jago was directed at Mackenzie's attacking force, which Shirley reported to "retreat very fast". [2] After it became clear the attack had failed, Shirley ceased fire around 11:30 am.

Other forts on the Gold Coast

Leaving those facilities garrisoned with personnel from Cape Coast, Shirley then sailed for the West Indies. Near the African coast off present-day Senegal, he captured and destroyed the French store-ship Officeuse, supposed to be worth £30,000. [4] before crossing the Atlantic to join the British West Indies fleet. [5]

Shirley sent two sets of dispatches back to Britain. One set went in the transport sloop Ulysses, which was under the command of Captain Frodsham. The French frigate Fée captured Ulysses and took her into Brest, but not before her captain had weighted the dispatches and thrown them overboard. Shirley's first lieutenant, Mr. Van court, took the second set in the transport cartel Mackerel, which also carried the Dutch governors of the forts to Europe. [4] 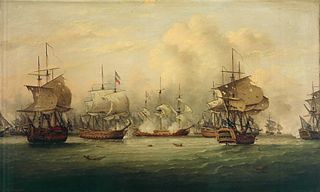 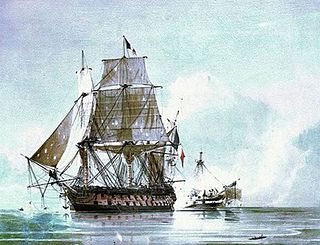 HMS Leander was a Portland-class 50-gun fourth rate of the Royal Navy, launched at Chatham on 1 July 1780. She served on the West Coast of Africa, West Indies, and the Halifax station. During the French Revolutionary Wars she participated in the Battle of the Nile before a French ship captured her. The Russians and Turks recaptured her and returned her to the Royal Navy in 1799. On 23 February 1805, while on the Halifax station, Leander captured the French frigate Ville de Milan and recaptured her prize, HMS Cleopatra. On 25 April 1805 cannon fire from Leander killed an American seaman while Leander was trying to search an American vessel off the US coast for contraband. The resulting "Leander Affair" contributed to the worsening of relations between the United States and Great Britain. In 1813 the Admiralty converted Leander to a hospital ship under the name Hygeia. Hygeia was sold in 1817.

Elmina Castle was erected by the Portuguese in 1482 as Castelo de São Jorge da Mina, also known as Castelo da Mina or simply Mina in present-day Elmina, Ghana. It was the first trading post built on the Gulf of Guinea, and the oldest European building in existence south of the Sahara. First established as a trade settlement, the castle later became one of the most important stops on the route of the Atlantic slave trade. The Dutch seized the fort from the Portuguese in 1637, after an unsuccessful attempt to the same extent in 1596, and took over all of the Portuguese Gold Coast in 1642. The slave trade continued under the Dutch until 1814. In 1872, the Dutch Gold Coast, including the fort, became a possession of Great Britain.

Elmina, also known as Edina by the local Fante, is a town and the capital of the Komenda/Edina/Eguafo/Abirem District on the south coast of Ghana in the Central Region, situated on a bay on the Atlantic Ocean, 12 km (7.5 mi) west of Cape Coast. Elmina was the first European settlement in West Africa and it has a population of 33,576 people.

The Dutch Gold Coast or Dutch Guinea, officially Dutch possessions on the Coast of Guinea was a portion of contemporary Ghana that was gradually colonized by the Dutch, beginning in 1598. The colony became the most important Dutch colony in West Africa after Fort Elmina was captured from the Portuguese in 1637, but fell into disarray after the abolition of the slave trade in the early 19th century. On 6 April 1872, the Dutch Gold Coast was, in accordance with the Anglo-Dutch Treaties of 1870–71, ceremonially ceded to the United Kingdom.

HMS Minerva was a 38-gun fifth-rate Royal Navy frigate. The first of four Minerva-class frigates, she was launched on 3 June 1780, and commissioned soon thereafter. In 1798 she was renamed Pallas and employed as a troopship. She was broken up in 1803. 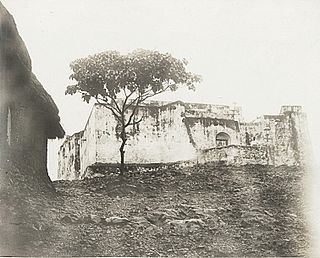 Fort Patience is a Dutch-built fort located in the township of Apam, in the Central Region of Ghana.

Admiral Thomas Mackenzie was a prominent British Royal Navy officer of the late eighteenth century. Mackenzie's career, while successful, was blighted by a series of controversies that limited his opportunities and command, resulting in his placement in reserve for the last 19 years of his career. During his early service, Mackenzie served at a number of engagements in the American Revolutionary War and advanced rapidly, but he was caught during service in the Indian Ocean in the midst of a disagreement between two senior officers and as a result was placed in reserve at the end of the war. At the start of the French Revolutionary Wars ten years later Mackenzie was restored to service, and commanded the ship of the line Gibraltar at the Glorious First of June. Mackenzie was again involved in a major dispute in the aftermath of the battle over credit for the victory, with the result that he never again served at sea.

The Capture of Trincomalee on 11 January 1782 was the second major engagement between Great Britain and the Dutch East India Company in the East Indies after outbreak of the Fourth Anglo-Dutch War. After capturing Negapatam, the major Dutch outpost in India, a British force assaulted the Dutch-controlled port of Trincomalee on the eastern coast of Ceylon, and successfully stormed Fort Fredrick and Fort Ostenburg to gain control of the city and the port. In gaining control of the port, they also captured the vessels in the port at the time.

The Battle of Elmina in 1637, was a military engagement between the Portuguese and the Dutch, that culminated with the capture of the historical St. George of Elmina Fort by the latter.

Fort Nassau, near Moree, Ghana, was the first fort that the Dutch established on what would become the Dutch Gold Coast. 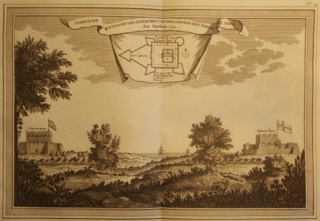 Ussher Fort is a fort in Accra, Ghana. It was built by the Dutch in 1649 as Fort Crèvecœur, and is a day's march from Elmina and to the east of Accra on a rocky point between two lagoons. It was one of three forts that Europeans built in the region during the middle of the 17th century. Fort Crèvecœur was part of the Dutch Gold Coast. The Anglo-Dutch Gold Coast Treaty (1867), which defined areas of influence on the Gold Coast, transferred it to the British in 1868.

Fort Amsterdam, a World Heritage Site is a fort in Kormantin, Central region, Ghana. It was built by the English between 1638 and 1645 as Fort Cormantin or Fort Courmantyne, and was captured by admiral Michiel de Ruyter of the Dutch West India Company in 1665,in retaliation for the capture of several Dutch forts by the English Admiral Holmes in 1664. It was subsequently made part of the Dutch Gold Coast, and remained part of it until the fort was traded with the British in 1868. The Fort is located at Abandze ,on the north-east of Cape Coast in the Mfantseman District of the Central Region of Ghana.

Fort de Goede Hoop or Fort Good Hope was a fort on the Dutch Gold Coast, established in 1667 near Senya Beraku.

The Dutch–Ahanta War was a conflict between the Netherlands and the Ahanta between 1837 and 1839. Beginning with a mere economic dispute between the Ahanta and the Dutch, who were based at the Dutch Gold Coast, the conflict ended with the hanging of Ahanta king Badu Bonsu II and the reorganization of the Ahanta state, establishing a Dutch protectorate over the Ahanta.

Ann and Amelia was a three-decker merchant ship launched in 1781. The British East India Company (EIC) twice employed her as an "extra ship", first when she went out to India to sail in trade in that market, and again in 1803 when she sailed back from India to Britain. On her return to Britain the Admiralty purchased her in June 1804 and converted her to a 44-gun fifth rate with the name HMS Mediator. The Navy converted her to a storeship in 1808, but then expended her as a fireship at the battle of the Basque Roads in April 1809.