Simone Laudehr (born 12 July 1986) is a German footballer. She plays as a central midfielder or winger for Bayern Munich and the German national team. [1]

Laudehr began her career at the age of three at FC Tegernheim. In 1996, she joined SC Regensburg, before playing for FC Bayern Munich for one season. At Bayern she made her Bundesliga debut. Laudehr transferred to FCR 2001 Duisburg in 2004, where she was runner-up in the Bundesliga five times, including four seasons in a row from 2005 to 2008. She won the German Cup twice with Duisburg and claimed the UEFA Women's Cup with the club in the 2008–09 season. [1] For the 2012–2013 season she moved to 1. FFC Frankfurt. She extended her contract until the 2016–17 season on 21 April 2015. [2]

In 2004, Laudehr was runner-up with Germany at the 2004 UEFA Women's U-19 Championship and later that year won the 2004 FIFA U-19 Women's World Championship. She made her debut for the German senior national team in July 2007 against Denmark. Only two months later she was part of Germany's 2007 FIFA Women's World Cup squad. Laudehr was a starter for Germany in five matches, including in the World Cup final, in which she scored after 86 minutes to seal the German 2–0 victory. Her World Cup winning header was later voted Germany's Goal of the Month.

One year later, she won the bronze medal at the 2008 Summer Olympics and was part of Germany's team which won the country's seventh title at the 2009 European Championship. Laudehr has been called up for Germany's 2011 FIFA Women's World Cup squad. [1]

She was part of the squad for the 2016 Summer Olympics, where Germany won the gold medal. [3]

Laudehr was born in Regensburg, Bavaria, Germany. She is the daughter of a Romanian mother, Doina, and a German father, Hubert. [5]

1. Frauenfußballclub Turbine Potsdam 71 e. V., commonly known as 1. FFC Turbine Potsdam, is a German women's football club located in Potsdam, Brandenburg. They are one of the most successful women's football teams in Germany, having won six Frauen-Bundesliga championships and two UEFA Women's Champions League titles. They play in the Karl-Liebknecht-Stadion in the Babelsberg district of Potsdam, and their biggest rivals are 1. FFC Frankfurt.

Inka Grings is a retired German international footballer. She played sixteen years as a striker for FCR 2001 Duisburg. Afterwards she played for FC Zürich Frauen. She also played for the German national team. Grings is the second all-time leading goalscorer in Germany's top division, the Fußball-Bundesliga (women), with 195 goals and claimed the league's top-scorer award for a record six seasons. Playing for Germany, she has also been the top-scorer at two UEFA European Championships. Grings was named German Female Footballer of the Year in 1999, 2009 and 2010. 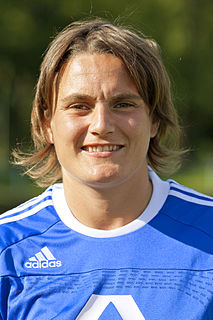 Eintracht Frankfurt is a German women's association football club based in Frankfurt. Its first team currently plays in the German top flight, Frauen-Bundesliga. From 1999 to 2020, the club was known as 1. FFC Frankfurt.

Ursula Ulrika Holl is a retired German footballer. She currently works as the goalkeeping coach for Bundesliga side Bayer Leverkusen.

Annike Krahn is a former German footballer who played as a centre back. 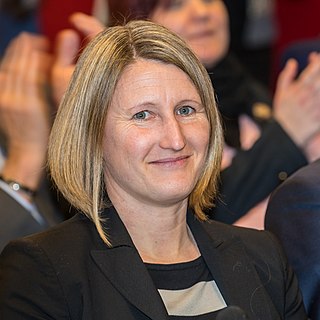 Sonja Fuss is a German football defender. She played for the Chicago Red Stars in the National Women's Soccer League (NWSL) and the German national team. She has played in the German Bundesliga since 1992. In 2011, together with Inka Grings, she played for Swiss side, FC Zürich Frauen.

Ariane Hingst is a retired German footballer who is currently an analyst for Fox Sports. She was primarily utilized as a defender or a defensive holding midfielder. Hingst announced in the middle of 2011 that she would be retiring from international football with the German national team. In addition it was announced by 1. FFC Frankfurt manager Siegfried Dietrich that Hingst had left the Frankfurt club. 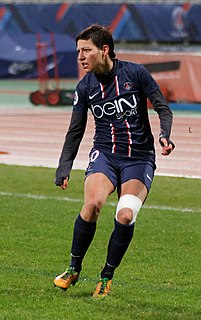 Linda Bresonik is a German retired footballer. She played as a defensive midfielder or wing back.

Fatmire "Lira" Alushi is a German former professional footballer who played as an attacking midfielder. She placed third in 2010 FIFA Ballon d'Or competition, an annual award given to the world's best player.

Kerstin Garefrekes is a German footballer. She plays as a midfielder or striker for 1. FFC Frankfurt. 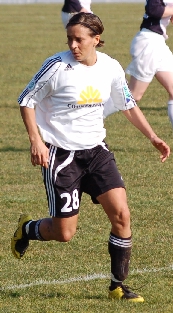 Sandra Smisek is a former German footballer, who played as a striker in Germany for FSV Frankfurt, FCR Duisburg and FFC Frankfurt, as well as for the German national team.

Saskia Bartusiak is a German retired footballer. She played as a centre back.

Célia Šašić, née Okoyino da Mbabi, is a retired German footballer of Cameroonian and French ancestry. She played as a striker for SC 07 Bad Neuenahr, 1. FFC Frankfurt and the German national team before retiring in 2015. 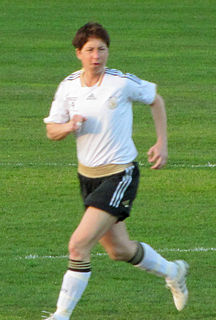 Maren Meinert is a German football coach and former player who played as a midfielder and striker. She was most recently the head coach of Germany women's national under-20 football team.

FCR 2001 Duisburg was a German women's football club from Duisburg. The first team played in the Bundesliga. They originate from a women's team formed in 1977 under the umbrella of FC Rumeln-Kaldenhausen and have existed as an independent club since 8 June 2001. The colors of the 400-member-strong club are green and white. The first team of FCR 2001 Duisburg, who carry the nickname of "Die Löwinnen" (lionesses), have played in the Bundesliga since gaining promotion in 1993. Winning the UEFA Women's Cup in 2009 and with past success in the German championship (2000) and the cup (twice), FCR Duisburg was one of the top teams in German women's football. In 2013 the club filed for insolvency and players joined and formed a new women's section at MSV Duisburg. 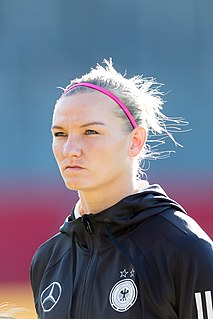 Alexandra Popp is a German footballer and Olympic gold medalist. She plays as a striker for VfL Wolfsburg and the German national team. She previously played for FCR 2001 Duisburg and 1. FFC Recklinghausen. She was twice named German Footballer of the Year in 2014 and 2016, and in February 2019 was named captain of the national team. 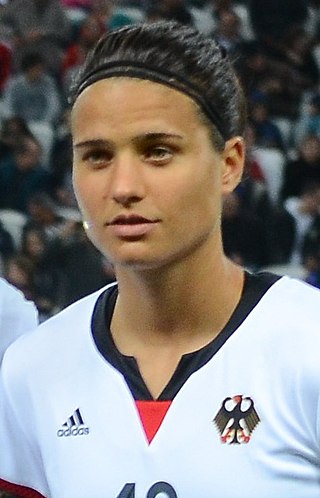